Lulu Out of the Box 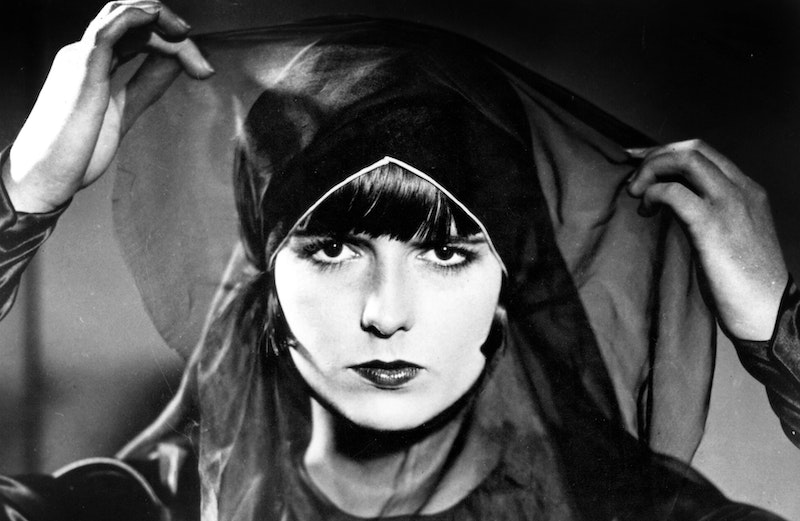 Apart from inducing pleasure, eros is often tragic and violent. This triad—pleasure/violence/tragedy—melts into one entity, and separate essences of all three aspects become difficult to distinguish. The power of such erotic intoxication and contradiction is perfectly encapsulated in G. W. Pabst’s masterpiece, Pandora’s Box (1929), a silent film and one of the best representatives of the Weimar German cinema. Based on Frank Wedekind’s two plays, Erdgeist (1895) and Die Büchse der Pandora (1905), the story centers around a young woman, Lulu (Louise Brooks), who puts everyone under her spell. Like a siren, she enchants every man (and one woman) into pure irrationality that leads to immorality and ultimately destruction.

The film opens with Lulu in an upper-class apartment, although it’s not clear how she fits into such an economic and social structure. She receives a visit from an old man, whose appearance is that of a tramp, and we see immediately there’s a great familiarity between them. What becomes apparent throughout the film is that Lulu is completely blind to social norms and class. She doesn’t distinguish between one person or the next based on class. Rather, she sees men and woman in terms of desire, both given and reciprocated.

The tramp turns out to be Schigolch (Carl Goetz), Lulu’s pimp from her days as a circus performer, and paradoxically, a father figure. This relationship is skewed because while Schigolch has some fatherly and protective affection for her, he’s demanding that she use her body and charm to attain more money.

In the midst of this reunion, the master of the house arrives. It’s Dr. Ludwig Schön (Fritz Kortner), an upper-class man with whom Lulu lives as his mistress. How they became lovers is unclear but irrelevant. It’s impossible for Schön to marry Lulu given her social standing, and he knows that he has to get rid of her and marry a woman of the same class.

In order to assuage his guilt and to keep Lulu busy, Schön suggests she perform in his son’s theater production. She is, after all, a competent dancer. As the show’s about to start, Lulu once again seduces Schön and he’s caught by his fiancée. The look of glee and conquest in Lulu’s eyes is one of the most memorable scenes in cinema history—at once innocent and calculating, Louise Brooks’ Lulu is in absolute control.

Augusta Geschwitz (Alice Roberts)—suggestive of both Countess’ lesbianism and Lulu’s sexual openness. Once again, she doesn’t see gender or class, only human beings to be enjoyed. This brings further humiliation to Schön. He’s a fool, despite his stern and aggressive disposition. He has no will when he’s with Lulu, and it’s not just his social standing that is destroyed but also his interior life. (We see the same theme running in Josef von Sternberg’s film, The Blue Angel, 1930 in which Marlene Dietrich seduces a gymnasium professor that leads to his downfall.)

To make matters worse, Schön’s son, Alwa, is caught by his father in a suggestive embrace with Lulu. Alwa too is smitten with Lulu. This is the breaking point for Schön. He orders his son to leave, and gives Lulu a gun to kill herself. In the struggle, the gun goes off and it’s Schön who’s killed. Lulu is charged with murder but with the help of Alwa and Schigolch, she escapes from the courtroom. They’re on the run, and move from one city to another, until they settle in London, poor and destitute. Everyone has been destroyed by this Dionysian frenzy, and Lulu too meets the final end—she’s murdered by a serial killer.

Although Louise Brooks made more films after Pandora’s Box, it’s her role as Lulu that’s the most memorable. The character and person are indistinguishable. She is Lulu and the acting elevates Brooks’ essence and nature. It’s easy to see how anyone can be seduced by Brooks. Critic Kenneth Tynan said, in his personal reflection of a cinematic encounter with Brooks: “She [Brooks] has run through my life like a magnetic thread—this shameless urchin tomboy, this unbroken, unbreakable porcelain filly. She is a prairie princess, equally at home in a waterfront bar and in the royal suite at Neuschwannstein; a creature of impulse, a creature of impulses, a temptress with no pretensions, capable of dissolving into a giggling fit at a peak of erotic fantasy; amoral but totally selfless, with that sleek jet cloche of hair that rings such a peal of bells in my subconscious.”

Yet, there’s a structure, even among the most sexually free people. Commenting on Marquis de Sade’s work, Camille Paglia notes in Sexual Personae (1990) that “the libertines establish their own rigorous structure, the natural hierarchy of strong and weak, master and slave… As a Dionysian sexualist, Sade abolishes the great chain of being, sinking man into the continuum of nature…” Lulu also establishes her own law because the erotic doesn’t recognize or care for the ethical that already exists. This is one of the great themes that emerges in Pandora’s Box. Are we prisoners of the social norms, or are we captives of desire? Is Lulu a heroine? Can we really call her good since she drives everyone to act immorally?

In Lulu in Hollywood (1982), Brooks writes, “Besides daring to film Wedekind’s problem of abnormal psychology—in Wedekind’s own words, “this fatal destiny which is the subject of the tragedy”—besides daring to show the prostitute as the victim, Mr. Pabst went on to the final, damning immorality of making his Lulu as “sweetly innocent” as the flowers that adorned her costumes and filled the scenes of the play. “Lulu is not a real character,” Wedekind said in a commentary, “but the personification of primitive sexuality who inspires evil unaware. She plays a purely passive role.’”

In almost every cinematic and literary output, giving in to one’s desires brings about existential downfall. Nothing good comes from it because the desire functions outside of human realm. We want it, yet we can’t handle it. We want to feel alive, yet with every erotic experience, we die—something French writer and philosopher, Georges Bataille called, “little death.” As he writes in Tears of Eros (1961): “…unless it is given to us in all its sudden depth, the meaning of eroticism will escape us. Eroticism is first of all the most moving of realities; but it is nonetheless, at the same time, the most ignoble… In relation to the simplified reality that is a limit for mankind as a whole, eroticism is a ghastly maze where the lost ones must tremble. This is the only way to come close to the truth of eroticism: to tremble.”

Lulu’s insatiable desire is contrasted with the permanence of morality and social norms. Eros, in this case, brings shame and humiliation but only to those who function with the ethical sphere. Lulu’s in full possession of her metaphysical constitution and the idea of community is meaningless to her. But this rejection of society is not borne out of judgment but Lulu’s essence that doesn’t bend to the formal and permanent reality of morality. Ethics function in relation to actions, events, and time. Eros functions outside of time, and much like the continuity of a female orgasm, Lulu is a metaphysical reality that revels in primeval and, to use Camille Paglia’s term, chthonic essence. She is a type rather than a person. There’s no gender, only sex.