Comet-length careers leave no time to build a real body of work: Harlow has no classics. 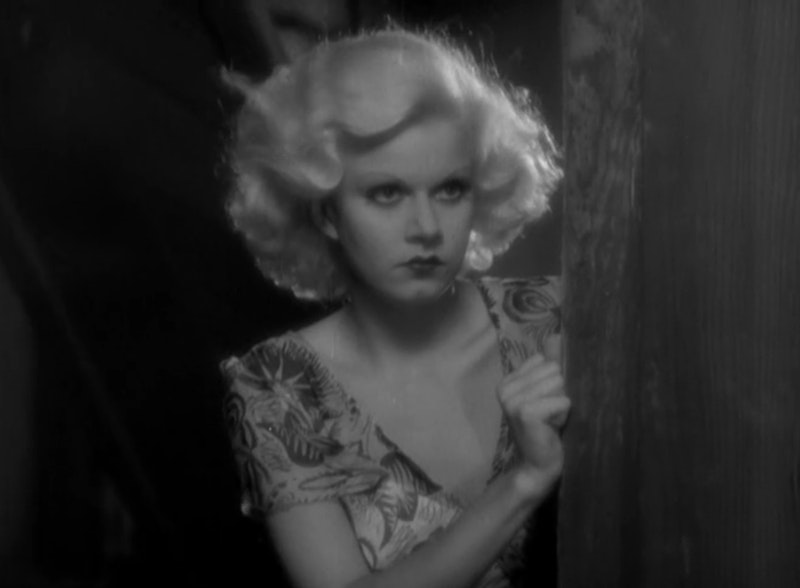 Unless you like Myrna Loy with mayonnaise on her chin, Libeled Lady is no match with most of their many collaborations. Jack Conway’s 1936 film is competently made, but I can only damn it with such faint praise. I first heard about Libeled Lady on Karina Longworth’s show You Must Remember This, a figure covered in series on both MGM and “Dead Blondes” like Veronica Lake, Lana Turner, Marilyn Monroe, and Peg Entwistle. I’m not sure how well known the name “Jean Harlow” is today among the general public in America—maybe it’s out there, a name impossible to place. Because Harlow died so young—26, and only a year after Libeled Lady’s release—she hardly got the opportunity to work and enough time to star in some classics. She never did.

Harlow’s breakthrough, Platinum Blonde, came out in 1931, giving her barely six years to build something beyond that title (changed in post-production from the less appealing Gallagher). Harlow would remain only a name, not even an archetype or a myth, her greatest impact through someone she inspired: Norma Jean, who became Marilyn, who did have time to star in some classics and leave behind something beyond nicknames and headshots. Platinum Blonde is not good, a minor Frank Capra movie, with an especially irritating performance by Robert Williams (dead of peritonitis three days after the premiere). It’s not even memorable for the moment Longworth emphasized: a tracking shot of Harlow’s deadpan face as we hear man after man whistle and catcall after her. It’s no subway grate.

Libeled Lady is similarly inert, coming on the opposite end of Harlow’s brief career (she’d make just two more movies). Conway’s film is really a William Powell/Myrna Loy vehicle, and Harlow shows up only occasionally to hector Spencer Tracy (not yet gray or visibly cratered by booze), along with Powell, Loy, and Walter Connolly. In many of her scenes, Harlow approaches something like a Carole Lombard impression, but unlike My Man Godfrey, this movie has nothing to offer other than four movie stars together for the first time! The recent Blu-ray by Warner Archives is typically great, with three shorts from the mid-1930s, a 13-minute radio promo for the movie prominently featuring Leo the Lion, and Libeled Lady’s original trailer. “FOUR GREAT STARS!” And that’s all.

To my eye, the only time Harlow approached contemporaries like Marlene Dietrich, Claudette Colbert, and Lombard was in Victor Fleming’s Red Dust. Released in 1932, Harlow is a long way from the stiff performance of Platinum Blonde, and her mediocre attempt at screwball comedy in Libeled Lady. Harlow is lit like Dietrich in Fleming’s film, and even though it came out the same year as Shanghai Express, preceded by three other masterpieces, Harlow isn’t Dietrich. But she’s glowing here, and while I can’t get on board with those who dismiss John Ford’s 1953 remake Mogambo (“It’s just tits and tigers,” he told General Marshall), Fleming makes Harlow look like a movie star in a way she just doesn’t in any of her other films, major or minor—there really aren’t many.

Red Dust isn’t just Harlow—it’s Clark Gable, and most surprisingly, Mary Astor. Her “Lavender Diaries” are well circulated now, but she still comes off like her public image insisted at the time: uptight, cold, even frigid. Nothing of the sort here: it’s extraordinary when Gable grabs her in a tight kiss in a bungalow during a monsoon. In present day Vietnam, this love triangle comes together, breaks apart, and resolves, all with the orbiting presence of Willie Fung, performing the Asian-American equivalent of Stepin Fetchit’s act.

It’s excruciating, because it taints otherwise beautiful films—I can’t say that The Sun Shines Bright, John Ford’s 1953 masterpiece, is any better for Fetchit’s performance (his last). Nor did his presence do anything but freeze the audience at a revival of Anthony Mann’s 1951 Technicolor Western Bend of the River earlier this week at Baltimore’s Charles Theater. And yet, rear projection has dated too—but those who laugh “at” revival screenings should jump off a building together and make the world a better place.

To paraphrase Jay C. Flippen and James Stewart in Mann’s film: “Only thing you can do with a rotten apple is throw it out—otherwise it’ll spoil them all.”

“There is a difference between apples and men… really, there is…”

And films, and art, and movie stars. Jean Harlow died in 1937 after a botched tooth extraction led to a heart infection led to a dumb doctor giving her the wrong drugs led to her death on June 7, 1937. Tracy wrote in his diary that day: “Jean Harlow died today. Grand gal.” Maybe so, but without a disciple as iconic as Marilyn Monroe, she would’ve been even more forgotten, someone like Clara Bow or Constance Bennett (ever the equal of her sister Joan). Kidney failure be damned, but she’s perhaps one of the most famous and “well known” movie stars of Classic Hollywood that only ever had time to perform in one mode, in one pitch. Even Carole Lombard had time to flex a bit. Harlow slumps in screwball, and especially after watching Red Dust, one sees her in Dietrich parts, never reaching the same heights, but finally with an image that matches the name.