Will King Kong Really Be a Match for Godzilla in 2020?

Not if Kong: Skull Island is anything to go by. 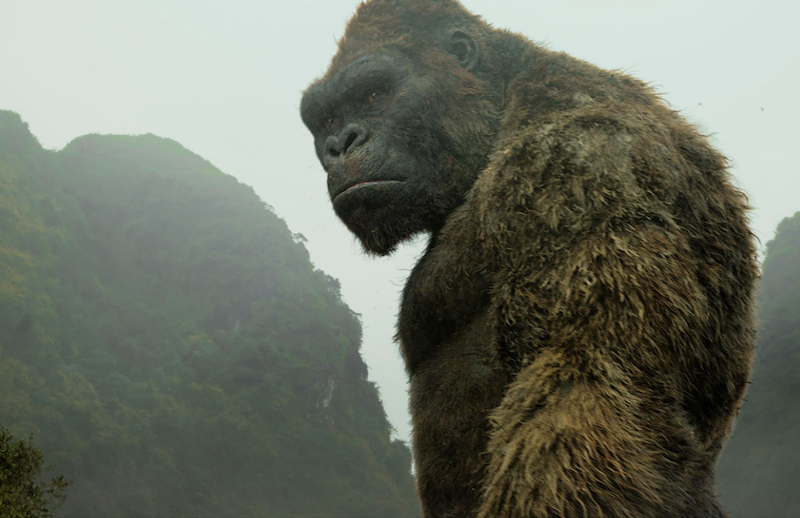 Recently, my wife and I went to see Kong: Skull Island, the latest entry in Legendary Pictures' emerging kaiju universe. Aside from the teenagers whispering in the row behind us, it was a mostly enjoyable experience. I think the critical consensus is about right. The gigantic ape's return to the big screen isn't bad, but it's not great either. It's a serviceable, albeit forgettable blockbuster. As someone whose interest in kaiju films was sparked by Legendary's Godzilla and fed further by Toho Pictures' Shin Godzilla, this was a bit of a disappointment.

But I suppose not all monster movies can be great. Truth be told, I mostly wanted to see Kong: Skull Island because it lays the groundwork for Legendary's planned 2020 matchup, Godzilla vs. King Kong. In this respect, I was a little confused. During the events of Jordan Vogt-Roberts reboot of the 1933 film, King Kong is brought down by a small, rag-tag group of soldiers. We're talking about a handful of people. It's actually only through the intervention of other humans that he survives the encounter. How can this be? And how can Legendary's Kong present a meaningful challenge to the King of the Monsters?

Granted, we're told by a character played by John C. Reilly — who really steals the show, as other reviewers have noted — that Kong is still growing. But how much further will he grow? In Legendary's Godzilla, the eponymous creature faces the full brunt of the United States military without really seeming to notice. As Screen Rant's Alex Leadbetter points out, the original Kong was 24-feet tall. Presumably so as to be able to better fight the studio's 355-foot Godzilla, Legendary's Kong stands 100-feet tall circa the 1970s. But even if he triples in size by the time of the events of Godzilla vs. King Kong, he'll still be significantly smaller than his foe.

In Toho's campy, 1962 matchup of the famous movie monsters, the conflict ends in something of a tie. The rubber-faced Kong swims back to his island home, while Godzilla, we assume, retreats to the ocean depths. There's an urban legend that say the United States and Japanese versions of the film had different endings — with the King Kong winning in the American release and Godzilla triumphing in the Japanese one. But this is a myth. As Snopes.com states, "Although the Japanese film was substantially altered in its American release, the climactic battle between the two titans ended with the same results in both versions: an ambiguous draw."

Given Kong's size and performance in Kong: Skull Island, it's hard to plausibly imagine a similar result in Legendary's 2020 slugfest. He's a good deal shorter than Godzilla and, frankly, he got his butt kicked by a few castaways. Whatever the case may be, I'll no doubt be in line to buy tickets. After all, if I can make it through the awful All Monsters Attack, I'll probably watch just about anything kaiju-related (this side of Power Rangers). And despite the relative mediocrity of Kong: Skull Island, I actually retain a large degree of goodwill toward Legendary for their initial Godzilla reboot.