One Paints, the Other Pays

The Irishman isn’t the mournful masterpiece or serious mafia critique that some advance press made it out to be—just don’t watch it in sections. B 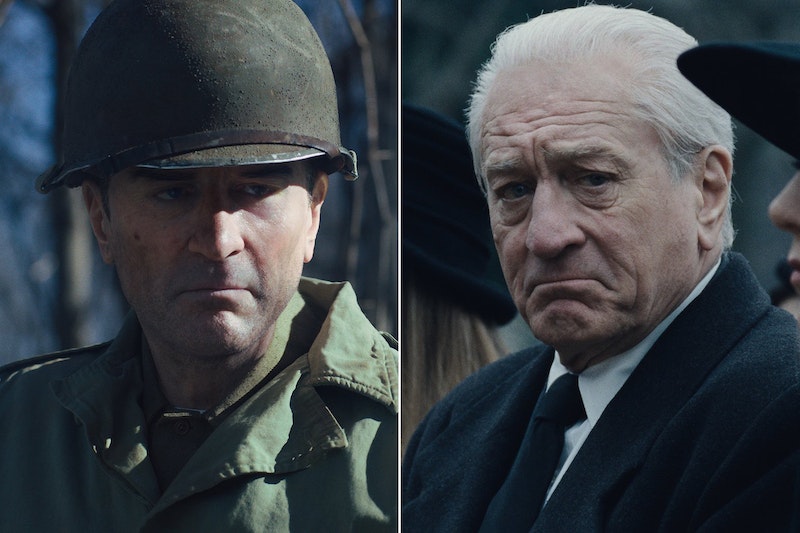 Why is everyone looking backwards? This year, so many major movies—Once Upon a Time in Hollywood, Pain and Glory, The Souvenir, The Image Book, and now The Irishman—have a meta textual relationship with the body of each respective director’s work, and they’re all obsessed with myths. For Almodóvar, his Pain and Glory was the most auto fictional, and one can only hope he’s gotten his heroin problem under control. For Tarantino, Once Upon a Time in Hollywood was an opportunity to make a fairy tale about a fairy tale machine. His film is a gloriously refracted and altered history, a cornucopia of signs that Baudrillard would’ve loved (or loathed, but we would've gotten an essay out of it either way). For Godard, The Image Book was a reprise of his Histoire(s) du Cinéma, his 1988-1998 opus that juxtaposed classic movie iconography with footage of concentration camps and mass graves during World War II. Now, 20 years later, he’s swapped out Auschwitz for Al Qaeda and ISIS: in his eyes, living proof that cinema has failed to realize its destiny as a medium of revelation rather than simple entertainment, a political instrument that can make the world a better place.

It was “revelation” that Martin Scorsese said separated the Marvel Cinematic Universe from real “cinema.” I’ve already written about the irony of Scorsese comparing the MCU to theme park rides, because what were Hitchcock pictures and, even earlier, the nickelodeons that popped up in Manhattan and on Coney Island near the turn of the century? But now that The Irishman is out on Netflix, the Marvel fans can weigh in. People hate-watching a three-and-a-half-hour movie just to live tweet about how “no one cares about obscure 1960s continuity” and the inclusion of Jimmy Hoffa and the labor movement makes it a “Bernie Bro” movie that is “anti-idpol.” I don’t want to be nice to these people.

But I wish Scorsese’s movie was better. The Irishman is pro forma through and through, and not even the final half hour, where Frank Sheeran (Robert DeNiro) has outlived all of his mafia friends and sits alone in a nursing home, hits as hard as it should. The Irishman isn’t close to the career summation or meta-legacy movie some critics made it out to be. Sheeran is also a much dumber and less interesting character than every other role DeNiro has had in a Scorsese movie. Why do people love Goodfellas and Casino so much anyway? This feels like the work of an old man—“masterfully crafted,” sure, but inspiring? Moving? Powerful? No. This is a rerun, and as demystification of the genre, anyone unconvinced by Joe Pesci’s violent end in a cornfield in Casino has cement in their brain, not their shoes.

So many moments in The Irishman feel like riffs on the dinner scene in Goodfellas with the dog painting. It’s funny, it isn’t pushed too much, and it’s essential to the film’s focus on the “off” moments of mob life. But come on: Goodfellas and Casino already deglamorized the mafia, everything ends in violent death and paranoia, whether it’s on a coke bender with helicopters overhead or turning a corner, being in the wrong alley, arriving late for a meeting with Jimmy Hoffa. Al Pacino’s performance as the labor martyr is awful—his attempt at whatever that accent was reminded me of Orson Welles in The Lady of Shanghai, slipping in and out of Leprechaun Irish.

Jesse Hassenger for The Verge: “The de-aging effects are effective in part because they’re subtle; Frank Sheeran never looks especially youthful. For most of the movie, he feels comfortably settled into middle age. It’s implied that his service in World War II may have robbed him of any youthful idealism, or even general lustiness.”

Strangely, I didn't notice the de-aging much in a theater, it didn't bother me. But every time I've seen clips or pictures on a computer or phone screen, it's looked like The Polar Express. I admire people watching The Irishman on motorcycles and in airports, I could never get through this movie in one go unless I was in a theater. Even if Scorsese took Netflix viewing habits into account, he hasn't made a movie that lends itself to episodic or block viewing. The first three hours of the movie are so unremarkable and relatively inconsequential, but that isn't wasted time: all of the petty haggling, fish in the backseat, and complaining about people being late for meetings is the bedrock of the final 30 minutes. This is how a thoroughly violent and meaningless life ends: alone, abandoned, and empty handed.

I liked The Irishman—it never felt laborious, even if it feels so run of the mill for three hours. A few things stick with me: Jim Norton as Don Rickles, the interpolation of the harmonica theme from Jacques Becker’s Touchez Pas Au Grisbi (first in its original harmonica rendition and then with cellos), Sheeran’s errands to buy a coffin and a grave site. They pulled off the de-aging, and there’s no Polar Express uncanny valley horror in the first half of the movie. But they never look 30, just get that out of your head and assume the movie starts with DeNiro at 50.

Again, think of John Ford’s The Man Who Shot Liberty Valance, the Ford film The Irishman has the most in common with: both are primarily concerned with how history is written (James Stewart and John Wayne are also supposed to be 30+ years younger and they never look it, but ultimately it doesn’t matter). I Heard You Paint Houses, the Charles Brandt book that the movie is based on, has Sheeran’s deathbed confessions with independent corroborations. He says he killed Hoffa in 1975, but this has been disputed in the 15 years since the book was published. Who knows? I Heard You Paint Houses, and now The Irishman, are two separate attempts to print the legend. The official title of the movie isn’t shown onscreen until the very end, while I Heard You Paint Houses is shown twice, at the beginning and immediately following the other title card. What’s it called? Who said so?

Unfortunately, like so many of Scorsese’s movies, the thesis is more interesting than the result. The Departed was a much better organized crime movie, and one that really fucking moved and spared no one. The Wolf of Wall Street, released just six years ago, showed that Scorsese could still turn in masterpieces past the age of 70. And I stand by my enthusiastic review of Silence, his overlooked religious epic about Portuguese monks in Japan in the 1600s. But what is The Irishman but a $200 million dollar cornucopia of mafia signs and iconography, with no one to hang it all on? Frank Sheeran simply isn’t compelling as a person—he’s an idiot and a sociopath, who doesn’t appear to lose any “morals” in his journey from WWII foot soldier to bitter retiree. Sure, he’s upset by his daughter Peggy’s explicit rejection, but doesn’t want to know why she’s upset. He’s a dumb, easily manipulated ape from the moment we meet him to the moment we leave him in that final cut to black. Rupert Pupkin he’s not.

More positives: Joe Pesci has never been better, and his performance is by far the film’s best. He’s a dead ringer for Sidney Lumet of all people, and he plays the “quiet don” role with grace and none of the scenery chomping of Pacino’s atrocious performance or DeNiro’s merely mediocre one. But an understated Pesci performance and a bracing final half hour that finds Sheeran face to face with slow death and little relief in hospice makes it more than mediocre or a retread. But at the end, there’s no sense of discovery of revelation, either with Sheeran’s own life or Scorsese’s body of work (or, more specifically, his organized crime films: Mean Streets, Goodfellas, Casino, Gangs of New York, and The Departed). Maybe a dilettante like Peter Travers goes ga-ga over the mere presence of DeNiro, Pacino, Pesci, and a Harvey Keitel cameo—but this is no Liberty Valance. It’s, as Marty would say, “a fine picture,” and nothing more.