When Harry Met Sally, They Both Should’ve Run

Harry and Sally are deliberately vague and unpleasant. 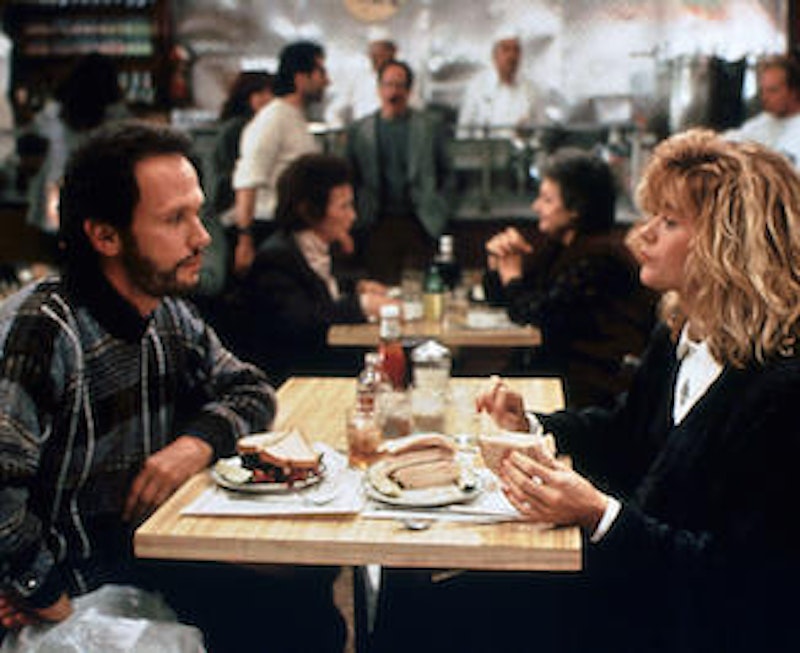 When Harry Met Sally, directed by Rob Reiner and written by Nora Ephron, is getting a 30th anniversary screening this month. It remains an iconic romantic comedy—for reasons that are understandable, but depressing.

In a good romantic comedy, you fall in love with both characters as they fall in love with each other. Pride and Prejudice is a delight because it's impossible not to be swept away by Elizabeth Bennett's sly wit, or Darcy's stiff but sincere gallantry. In His Girl Friday, Hildy (Rosalind Russell) and Walter (Cary Grant) compete in flights of dazzling verbiage to make you swoon in admiration. In the high school comedy Say Anything, you root for a sweetly confident goofball Lloyd Dobler (John Cusack) and sweetly confident genius Diane Court (Ione Skye) to help each other become the wonderful adults they deserve to be. In Destination Wedding, you watch two depressed and bitter curmudgeons find reluctant and unexpected hope, as well as hilariously awkward sex. A romantic comedy has to create characters that you want to spend time with. If it can't do that, it's a failure.

Or so you'd think. Yet, When Harry Met Sally hangs its romance on two of the least appealing main characters Hollywood has ever commanded audiences to embrace. Harry (Billy Crystal) and Sally (Meg Ryan) are a dull person's idea of interesting people. Harry is an irritating blowhard Woody Allen knock-off. When we first meet him as a college graduate, his wit consists mostly of saying cruel things, making tedious sexual innuendos, and blathering tired men-are-from-Mars-women-are-from-Venus talking points. He's supposed to mellow over the 12 years that it takes him and Sally to start dating. But even as an adult he spews out gross, racist jokes about Ethiopians and harangues his best just-betrothed friends about how their marriage is doomed because that's the only way he can deal with the disintegration of his own first marriage. He's selfish, smug, and his jokes aren't funny. Even Sally doesn't deserve to spend the rest of her life with this oaf.

Nor does Harry deserve to spend the rest of his life with Sally, who’s every bit as insufferable.  She's a vapid, self-absorbed prig whose one reiterated quirk is that she makes the lives of wait-staff hell by placing special orders in finicky detail. Ryan mugs and pouts through the film in a fugue of forced cuteness, desperately trying to infuse Sally with a soul the script never manages to locate. Her saccharine smarm is repulsive and unconvincing. How can anyone want to watch these two banter, or kiss, or, god forbid, have sex? In comparison, David Cronenberg's body horror films are authentic exercises in heartwarming emotional truths.

Even the people who created Harry and Sally can't really expect viewers to love them. And there are a number of tells that they don't.

The first is the film's most famous sequence. Even people who haven't seen the movie surely know what I'm talking about. Harry boasts that he can tell when women are enjoying sex, and Sally mimes an orgasm in a full restaurant to show him that he can't.

The scene is a good gag. It's also completely out of character. Sally is uncomfortable talking about sex and very conscious of what others think of her. We see her early in the film looking extremely uncomfortable when Harry goads her into saying something sexual in a different diner. She and Harry are good friends by the time of the orgasm scene, and she might put on this demonstration for him in private or with friends. But there aren't many people who would mime a screaming climax in public at full volume while sober, and Sally adamantly is not one of them.

The other hint that the movie doesn't expect you to feel affection for Harry or Sally is that it tells you almost nothing about them. Again, the movie follows them from college graduates to their mid-30s. But we learn almost nothing about their work lives or families. We hardly know anything about Harry's job as a political consultant (what party does he work for? Does he have political opinions?) Nor do we learn what Sally writes about as a freelancer. Neither of them seems to have any money troubles, or any siblings, or family. They have no interests that do not revolve around their romantic lives, which they talk about obsessively with their only two friends, Jess (Bruno Kirby) and Marie (Carrie Fisher). You watch Harry and Sally for an hour and a half, but you know little more about them than that they fell in love.

And that's supposed to be the point. The title characters meet and drive across the country together; then they bump into each other again in an airport; then they bump into each other in a bookstore. These serendipitous encounters are interspersed with short scenes of elderly couples recounting how they first met. The movie is an encouragement to self-mythologize; you're supposed to imagine you and your sweetie describing your own meet cute, and your own happily ever after. Harry and Sally are deliberately vague and unpleasant. If they were too appealing, or too clearly drawn, you might end up caring about them, rather than about yourself.

Given When Harry Met Sally's success, this kind of exercise in bland, mostly content-free validation is what a lot of people want from their cinematic romcoms. Watching blankly unpleasant people enter into a relationship that seems destined to make both of them miserable doesn't exhilarate me or make me reminisce nostalgically about how my wife and I met.

Instead, it mostly makes me despair. Reiner and Ephron clear away the detritus of character building to concentrate on the meet cute feeling of nostalgic exhilaration. But if love isn't about the people you love, then it feels like an empty exercise. Watching When Harry Met Sally, you wonder whether a culture that thinks this is what caring means can care about anything, or anyone.