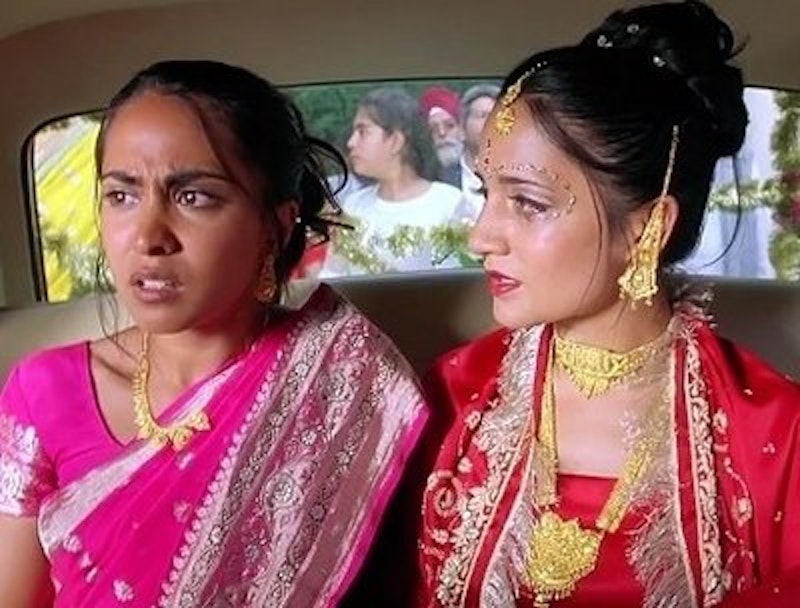 This is the fifth post in a series on women filmmakers. The fourth, about Old Joy, is here.

Gurinder Chadha's Bend It Like Beckham (2002) though, is a romcom and a sports drama. Rather than choosing desire or identity, it treats them as if they're interchangeable. Jess (Parminder Nagra), a Punjabi Sikh living in Hounslow, London, is obsessed with football, and with David Beckham—the first scene of the film is her fantasizing about playing with him for England. She's got a huge picture of Beckham's face on her wall too; he's a sex symbol, but he's also an inspiration. White and male, he's everything that a good Punjabi girl shouldn't want, and shouldn't want to be. No surprise then that when Jess does fall for a guy, it's her white Irish football coach, Joe (Jonathan Rhys Meyers), who, is, like Beckham, both someone to want and someone to want to be.

Before Jess falls for Joe, though, she falls for Jules (Keira Knightley.) Jules is a football player on the girls team at Hounslow that Joe coaches; she sees Jess playing in the park and scopes her out. Supposedly, this is professional; Jules thinks Jess will help her team. But Jules' longing, appraising looks aren't so different from the longing, appraising, frankly sexual looks of Jess' friends when they watch boys play football.

The film isn't quite willing to show a gay relationship; Tony doesn't get a significant other, and is relegated to the standard gay-best-friend role—though whereas in most romcoms he'd provide relationship advice, in this one he counsels Jess on her football career. Still, the film's flirtation with the possibility of queer desire fits into its questioning of gender roles. Punjabi girls are supposed to learn to cook and then marry a Punjabi man. Jules' mom's expectations for her are much the same. Women who are interested in sports rather than boys get stigmatized as lesbian—homophobia and sexism fit together.

The sexual possibilities between Jules and Jess are also, though, a nod to the viewer. Laura Mulvey's essay Visual Pleasure and Narrative Cinema argued that Hollywood is traditionally set up to encourage male viewers to identify with an active male protagonist, who gazes at women passively framed by the camera. In Bend It Like Beckham, though, gaze and identification are bent. Jess, a woman of color, is the hero, and the audience is encouraged to gaze at her in admiration and identify with her struggles—whether that audience is Jules, Joe, or Jess' own father (Anupam Kher), who says after watching her, "she is brilliant." All of these characters, and the viewer, watch with a charged intensity as she performs acts of wizardry with the soccer ball.

Jess looks differently, in multiple senses. She looks at Beckham as a model, rather than an object of desire. But she also doesn't look like protagonists are supposed to; she's the wrong gender and the wrong color. Women like Jess, in films, are usually Orientalist fetishes—feminine objects to be possessed by some male gazer like James Bond.

Jess does dress in a traditional sari for her sister's wedding… but then she runs off to the soccer finals, switching outfits clumsily in the car. After the game where she scores the winning goal, her teammates gleefully help rewrap her in her wedding finery. She dresses up because that's what you do at a wedding, just like you wear a uniform to play soccer. Joe, notably, doesn't fall for her when he sees her in her formal attire; there's no ugly duckling to swan moment. He's dazzled by her whatever she's wearing—and probably more by her cross-field pass than by her sari. He has an injury that has prevented him from pursuing his own soccer career, and his romantic interest in Jess is tinged with a bit of professional jealousy; she’s doing what he always wanted to do. He wants her, at least in part, because he wants to be her.

As a director, Chadha surely identifies with Jess too. Punjabi women aren't supposed to be soccer heroes; similarly, women of color can be the objects of the cinema gaze, but they rarely get to be the ones directing the camera. Jess' scrambling of identity and desire, then, is also Chadha's; when Jess aspires to be Beckham, Chadha is taking a position that’s usually reserved for white men. In doing so, she's trying to teach viewers, of all races and genders, to bend their gaze, and see women of color, and one woman of color in particular, as a Beckham, to desire and to desire to be.