Unless you're studying production design. 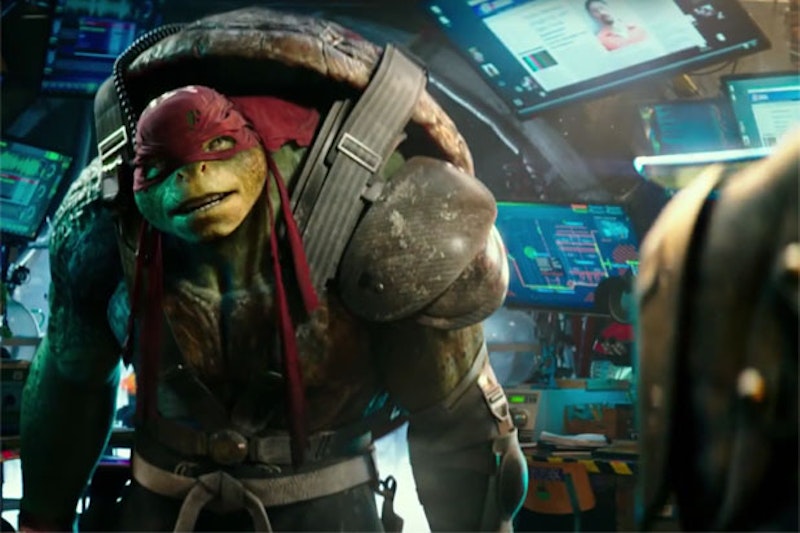 The best I can say about Teenage Mutant Ninja Turtles: Out of the Shadows—a sequel of a reboot of a cartoon adaptation of a comic book—is that it’s incompetent but relatively harmless. And unlike most projects bearing the name of producer Michael Bay, it never descends into pure nihilism.

The Turtles franchise, it appears, has had more iterations than Star Trek, in 20 years less time. It started as a comic book in 1984, with the four, pizza-loving anthropomorphic teenage turtles adapted first into action figures and then into a popular cartoon TV show in the late-80s. There were popular live-action movies in 1990 and 1991, another sequel in 1993 and a reboot attempt in 2007. There have been at least three versions of the cartoon series, on top of the Bay movie two years ago (I liked the old cartoons, and my kids enjoy the new ones.)

For the new film, Bay is not the director—Jonathan Liebesman did the 2014 film, while Dave Green does the honors now—but the new films borrow a handful of elements from Bay’s work: Megan Fox in sexy costumes, a belief in the virtue of meatheadedness, and the plot element (used in the second Transformers) that the main characters’ existence is a secret from the general public, even though they were part of multiple huge action blowouts, in broad daylight, in the previous film.

The plot is generally straightforward, albeit very silly. The four turtles (Michelangelo, Leonardo, Donatello and Rafael) are unable to take credit for the capture, in the first film, of bad guy Shredder (Brian Tee.) After a daring escape, the Turtles end up fighting a villainous consortium that includes Shredder, an evil scientist (Tyler Perry!) and alien-slug-in-a-robot-suit Krang (voiced by Brad Garrett). Also around for comic relief are mutant henchman Rocksteady and Be-bop, one of whom is played by pro wrestler Sheamus, as well as ineffectual ninjas known as the Foot Clan.

The biggest problem? The film, rated PG-13, is a little too dark and violent for kids, but there's no reason for any adult to see a Ninja Turtles movie. That's not all. The plot is a ridiculous jumble, going in all sorts of directions that make no sense and are quickly dropped. The one stab at moral weight—a scene where the turtles contemplate consuming ooze in order to revert to human form—is not only underdeveloped, but is pretty plainly cribbed from the “original” second Ninja Turtles film. And in the closing minutes, the film remembers that April O’Neil (Fox) is a journalist, something I figured the movie had decided to omit, since her reporting skills might have been put to good use at various times prior to that.

Not that the human cast is much help. Fox at this stage of her career has one specialty (using her beauty for comic effect) but she doesn't get to do that here. The four turtles are played by unknown actors/motion picture performers (Pete Ploszek, Alan Ritchson, Noel Fisher and Jeremy Howard); I guess the different turtles are supposed to have distinct personalities and character traits, but the movie doesn't quite establish them in any satisfactory way.

Meanwhile, Laura Linney looks embarrassed to be there as an NYPD bigwig, while the Knicks’ Carmelo Anthony makes two pointless cameos, one on the court and one off. And both Shredder and Linney have female sidekicks of Asian descent who barely get to speak, likely a nod to the international box office.

While the action scenes aren’t as incomprehensibly structured as those of the Transformers films, there’s nothing particularly noteworthy about them. One early sequence feels like a Fast and Furious knockoff, while the final battle features a superweapon that’s even more derivative of the Death Star than the one in The Force Awakens.

What’s positive about the movie? The production design of the Turtles' lair in the sewers is pretty impressive. And while the first film infamously used reshoots to recast Shredder—turning William Fichtner from Shredder himself into his henchman—the new one sticks with the same actor all the way through.