The purity of violation in Scars of Dracula. 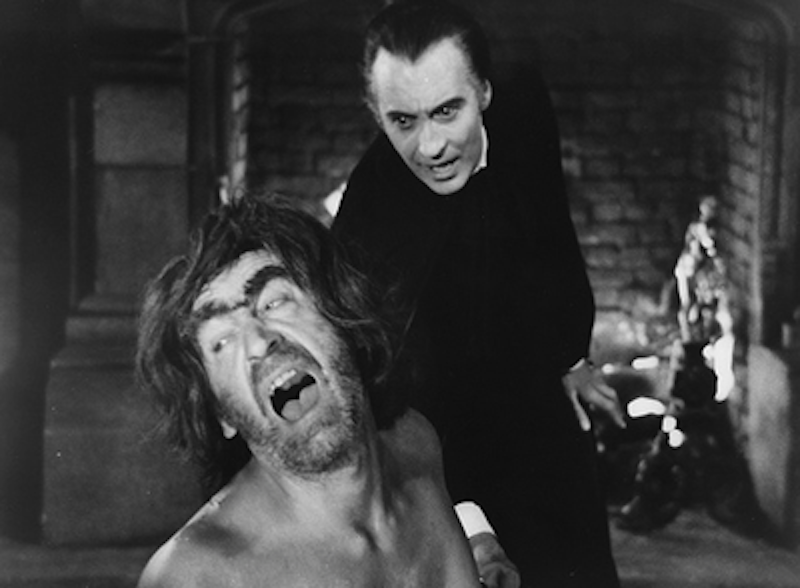 This is the sixth in a series of posts on the nine Hammer vampire films. The fifth post is here.

"Blondes make the best victims," Alfred Hitchcock declared. "They're like virgin snow that shows up the bloody footprint." Hitchcock's icy leading ladies, ready to be toothsomely despoiled, have many analogs in the Hammer Dracula films, where virtually all the leading ladies, radiating purity and vulnerability, are yellow-haired. So it's no surprise that Scars of Dracula (1970) features a transparent Hitchcock homage to one of those bloody blonde scenes. In The Birds (1963) Tippi Hedren is famously beset by feral birds, who stab her repeatedly and traumatically, as if nature itself has colluded with the filmmaker to draw red, lustful scars across the white heroine’s provoking perfection.

In Scars of Dracula seven years later, the same scene is repeated, this time with a vampire bat. Once again, the victim thrashes in terror, once again bloody scars appear on the spotless skin. Except this time, the victim isn't a blonde woman. Instead, the role of virgin is taken by a middle-aged Catholic priest (Michael Gwynn.) The substitution makes a certain amount of sense. If, as Hitchcock strongly suggests, blondes are exciting and sexy because they’re pure, then priests, symbolizing purity, should be even more exciting and even sexier. The Hammer Dracula films make little pretense of sincere Catholic spirituality; instead, Catholic imagery is used as a kind of exotic tincture—a period gothic touch, which is also a stimulating tease. Like many of its predecessors, Scars of Dracula highlights the connection between Christ and sex by drawing a juxtaposition between a crucifix and cleavage—in this case, specifically, the cleavage of the virginal blonde Sarah Framsen, played by Jenny Hanley. When she and her fiancé Simon (Dennis Waterman) stay at Dracula's castle, the count helpfully provides her with the de rigueur nightgown. For the remainder of the film, the camera strays lovingly to her bosom, where a golden crucifix lies, a symbol of white purity setting off a symbol of white purity.

Together, those dual symbols of purity refute, and thereby provoke, the most mouth-watering thoughts. Dracula's servant Klove (Patrick Troughton) obtains a locket with Sarah's photograph from Simon's brother, Paul (Christopher Matthews), when the latter meets his gruesome end at the castle. The glass on the locket is cracked, and Klove falls in love—both with the face and, one suspects, with that hint of the bloody footprint, the violating flaw.

But Klove has specific ideas about who gets to crack Sarah's immaculate visage. When the Count attempts to bite Sarah, the crucifix repels him. Staggering back, he commands his servant to grab the offending object, so he can get on with the defiling. Klove prepares to do so… but then is stopped when he recognizes Sarah from the locket. "You can't have her!" he cries to Dracula, and rushes away, leaving the cross, and the beauty unmarked. The scene is reversed later, when Klove seems set on assaulting Sarah, and the count violently intervenes. The thought of purity shattered becomes a spur to concupiscence, violence, and protection—for a time.

Defilement interrupted is one of the stock tropes of the Hammer Dracula films; the count is always just about to ravish the star, when the presence of a cross, or a shout from a male lead, forces him to withdraw. The Count also often comes between female vampires and their prey. In Scars of Dracula, for example, he leaps into the bedroom just as a sleeping Paul is about to be a meal for Tania (Anouska Hempel).

The refusal to let Tania have her way with Paul here is symbolically gratuitous. Paul and Tania have already had regular old non-vampire sex; she wakes in his bed, so there's no question of defending Paul's purity. Nor is Paul's life at issue; Dracula drains him of blood and hangs him on a hook not too long afterwards.

Instead, the failure to bite, the preservation of Paul's, or Sarah's, innocent neck, seems like it's a goal, or a pleasure, in itself. The Hammer films like to show the bloody footprint, but also show the snow, momentarily unsullied. The films compulsively present purity, which can be defiled or not, with equal satisfaction. The cross is the scene of transcendence or of violation, or both at once. Jesus penetrated and violated is also Jesus deified—that's the Christian mystery. But it's also why Catholicism is such a good foil for vampire genre pleasures.

Those pleasures are, notably, always interrupted. Vampire sex can never be consummated, because there are no vampires, except on the screen. The bloody footprint on the virgin snow is a sign or a symbol; the viewer can experience the actual act of pleasurable desecration only vicariously or imaginatively. The vampire bite stands for sex; the cross stands for purity—they're symbols or references. There's no snow and no blood, just flickering images that generate simulacra of sensation. The real bite, the red rush, is suggested, but never fulfilled. Imagined violent ecstasy always ends in frustration: horror and pleasure onscreen are always, from the viewpoint of the audience, interrupted.

In that sense, Scars of Dracula may be the most authentic of all the Hammer films, since it’s in many respects the weakest and least convincing of the lot. Hitchcock actually tied birds to Tippi Hedren, who suffered real bruises and real trauma at the hands of a director who really, throughout their relationship, treated her abusively. The bat attacks don't even attempt that level of verisimilitude; rarely have less convincing bats ever flapped and squeaked at the end of poorly manipulated puppet strings. It's a wonder the besieged priest doesn't break out into guffaws—and the rest of the film is similarly unconvincing. At the conclusion, the heroes don't even kill Dracula; a convenient lightning bolt takes him out, as the protagonists watch. Hitchcock touted the stark symbolism of horror, the images disfiguring the blank white screen. But his skill led him, inevitably, to create films composed of inauthentic believable horrors. Scars of Dracula, on the other hand, achieves a more rarified level of ineptitude. The phantasm of violation is purer because the film leaves no scar on any neck, or a mark on any cross.