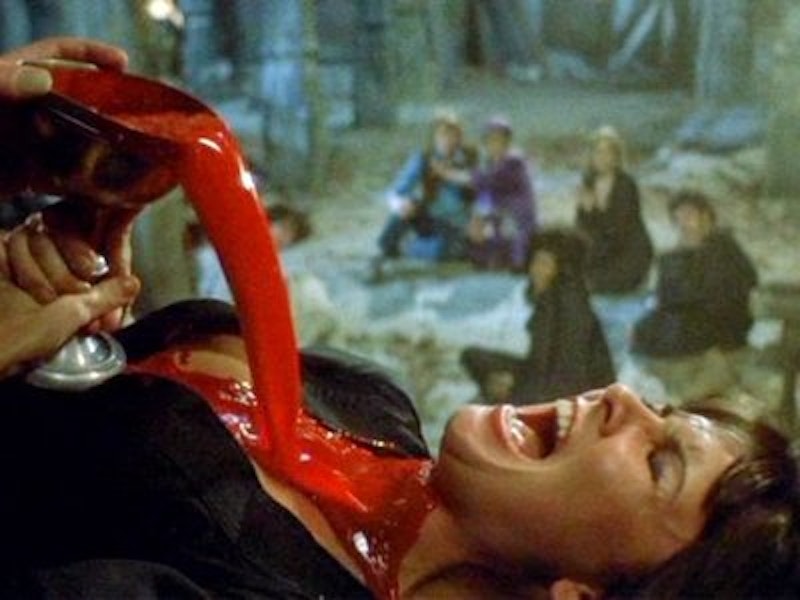 This is the seventh in a series of posts on the nine Hammer vampire films. The sixth post is here.

Dracula A.D. 1972 opens in 1872, with Dracula (Christopher Lee) and Van Helsing (Peter Cushing) battling atop a carriage racing through London's Hyde Park. Dracula gets a carriage wheels plunged through his heart, at the same time Van Helsing dies and is buried expeditiously. The flashback intro ends, and the camera pans up to the heavens… to catch a plane whooshing across the screen as funky psychedelic music kicks into gear. The old is dead; the new is here, daddy-o, complete with modern transportation and juvenile delinquent flower power.

This is the first Hammer Dracula film with a contemporary setting, and the series seems turned on by the new chance to groove. The first scene post-credits is a ridiculous damn-those-sexy-kids-are-taking-over set piece, as the band Stoneground and flower children invade and colonize a posh upper-class British home, boogying, breaking statuary, and fucking underneath the buffet table. At last the horrified snobs manage to overcome their paralyzing indignation sufficiently to call the cops, and the young hooligans race out the back way in a flurry of giggles, hip lingo, and what appear to be monk robes. If you were under 30, you'd understand.

The modern hippie vibe gives the series a chance to break out of its traditional and tired gothic tropes. Instead of all those boring closed mouth moldering villagers trembling obscurely and tediously, Dracula A.D. 1972 has young people partying and getting it on. Writer Don Houghton clearly enjoyed the opportunity, slipping in arch puns amidst the youth vernacular. "Laura will be there," one guy assures his girlfriend. "A bit drained, but she'll be there"—this just after we've seen Laura get the blood sucked out of her. Another one of the crowd gasps at the chance to get tickets to an exciting music show. "I'd sell my soul for that!" she exclaims—which, of course, she will.

You'd think, given the energy the hippies bring to the proceedings, that Houghton and director Alan Gibson might be grateful to them, and, say, give them the chance to fight vampires, rather than just slaughtered. Dracula A.D. 1972 could’ve been a proto-slasher, with Jessica Van Helsing (Stephanie Beacham) as the Final Girl, putting the stake through the heart of the re-risen old fuddy-duddy Dracula, and celebrating that we finally got out of that boring old castle and are swinging through the 70s.

The filmmakers aren't able to make that leap. The hippies are portrayed as clueless victims, whose experimentation with casual sex, drugs, and the black arts, deserves, and receives, chastisement. Hippies are wrong, the film declares—even as it looks on their debauchery with the lip-smacking voyeuristic glee of Johnny Alucard (Christopher Neame) watching Dracula ravish Laura Bellows (Caroline Munro.)

Hippies violate social norms, which is why they turn into evil vampires. The forces of order are represented by the boring by-the-numbers police dudes, who hassle Jessica and her pals out of disinterested virtue. Aiding the police in their anti-vampire, anti-hippie campaign is Jessica's grandpa, the cadaverous worrywart Lawrence Van Helsing (Peter Cushing).

In fact, for Van Helsing, as it turns out, Dracula is a helpful parenting aid—a live-action scared-straight exemplar. Early in the film Jessica helpfully assures her grandfather and the audience that she’s a good kid who doesn’t smoke, drink, have sex, or deserve to be murdered by a vampire. Still, you can see that Van Helsing is worried about the crowd she's running with. He makes some feeble efforts to get her to have dinner with him and bond, grandpa to granddaughter, but she rebuffs him to go out with her gang. Poor Van Helsing understands the mystery of the occult, but kids these days are a mystery impenetrable even by the most perceptive scholar.

And then Dracula shows up. Suddenly, those pesky gang ("group!") members are all conveniently dying off, and there's only grandfather left between Jessica and the Consequences of Your Actions, Young Lady. The final scene in the deconsecrated church is not just a triumph of Van Helsing over Dracula, but of Van Helsing over Jessica's wayward impulses. Dracula has captured, hypnotized, and dressed her in the usual Hammer bosom-flaunting, ready-to-be-ravished attire. Under the vampire's thrall, she is sexual, willing, and rebellious against proper authority: when Van Helsing stabs Dracula with a silver knife, Jessica pulls it out of him, even though her grandfather specifically tells her not to. Jessica is hell-bent on her own destruction—until Van Helsing defeats the monster, and Jessica awakes. Weeping, she falls into Van Helsing's arms, to be a good girl forevermore.

Whether as a bad girl or good girl, Jessica is under the sway of some guy. Her choice is between acting on orders from the bad patriarch, or acting on orders from the good patriarch—there’s no new boss, only the old bosses. Despite its flirtation with the contemporary, Dracula 1972 A.D. is still, ultimately, looking towards the past, not the future. Those two old occult dudes struggle across the centuries, and whether in the distant past or in the era of the Vietnam War, the young folks don't get to do much except die and obey.