Opposite and unexpected reactions to 45 Years and Hail, Caesar! 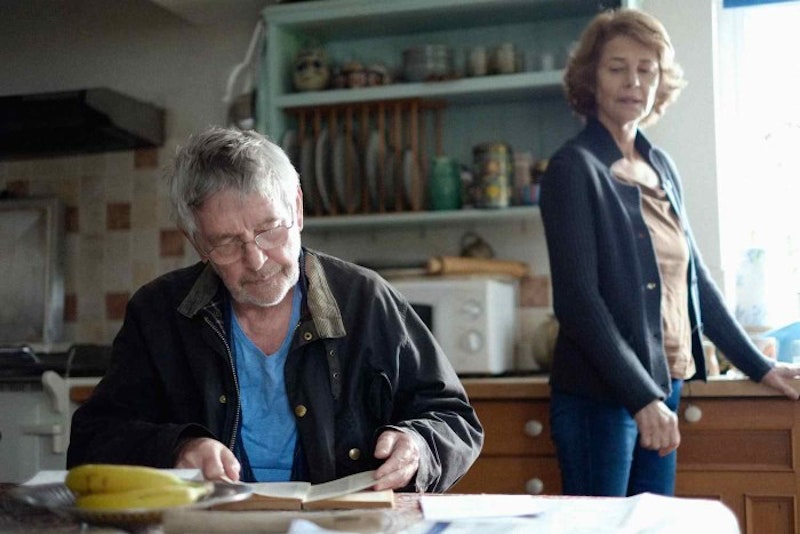 How did 45 Years get sold for distribution, let alone nominated for so many awards? This film is a joke, a miserable slog that appeals to almost no one. I went to a matinee at The Charles last weekend, and it was like a euthanasia convention in there. The blue light special crowd is this movie’s target demographic, but it looked like it left them just as cold as me and my family. Standing outside smoking a cigarette after rushing out of that death chamber, a bag of bones held aloft by her fellow crypt-mate asked us if we liked the movie. I shrugged and stuttered, unsure if my honest opinion might be too much for this woman’s heart to take. Before I could respond, she spat at us, wheezing, “I hated it. It felt like it was 45 years long!” She hacked into a hankie and was carried along by her handler, and we were beside ourselves.

A slug line at the bottom of A.O. Scott’s review for The New York Times described 45 Years as 95 minutes of “brutal regret.” It is. Andrew Haigh’s film is a misery, not just dry but also dehydrating, an interminable portrait of two hopelessly dull people in a diminishing marriage. There are no affairs, no murders, no drug addiction, no suicide, no heists, no feeling in this movie. Just Charlotte Rampling squinting and snooping like a shrew and Tom Courtenay behaving as if he were mentally retarded. I wasn’t expecting Elmore Leonard thrills, but this film is anemic, a pointless drudgery choking on its subtlety and understatement. Scott wrote in his review that 45 Years “suggests that even after decades together, two people can remain perfect strangers.” We should all be worried about the elderly attending this film; their heart rates are low enough as it is. Haigh could serve time for manslaughter.

Hail, Caesar!, on the other hand, is a barrel of monkeys, another great film by the Coen Brothers that sits somewhere between the brilliant and bizarre Burn After Reading and the misguided and forgettable The Ladykillers. Hail, Caesar! has been in development since 2004, yet its final form suggests that either its script or its final cut were severely edited from their original form. At only an hour and 45 minutes, Hail, Caesar! is far too short to give its excellent ensemble cast their due: Frances McDormand and Jonah Hill are featured in only one scene each, while Tilda Swinton, Scarlet Johansson, Channing Tatum, and Ralph Fiennes appear in only a few themselves. All of their characters are wonderful, worthy of their own turns starring in another rose-tinted vision of the old Hollywood studio system by the Coens.

It’s not that Hail, Caesar! could’ve been an epic—it feels like a producer’s commercial cut of a much longer film. It has so many threads that are hardly explored, and feels oddly unbalanced, with several scenes that linger unnecessarily on weak jokes and premises, abandoning plot lines and supporting characters, disappointing only in its lack. Jonah Hill got top billing for one brief scene, but Alden Ehrenreich carries the film along with Josh Brolin and George Clooney, who’s bearable only when he plays a hapless dolt. The press surrounding Hail, Caesar! is all doom and gloom, the lowest grossing wide opening ever for a Coen Brothers movie. But despite being released in February’s dumping ground, it’ll stand alongside their best comedies and live on, unlike most of the dreck that gets nominated at the Academy Awards and forgotten in April.