Not too sappy or dark, the movies tell an inspiring kidnap story. B+ 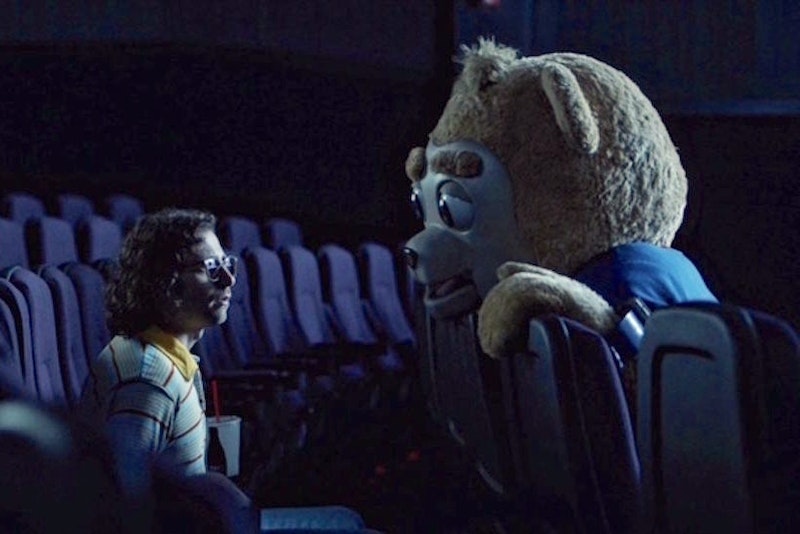 I’ve been surprised at the number of major Hollywood pictures I’ve seen this summer that operate on very specific—perhaps unintentional—emotional frequencies. The Emoji Movie was a Ludovico look into the black mirror universe of smartphones and social media; War for the Planet of the Apes was a Cormac McCarthy-esque slog through the misery of perpetual war, Sisyphean struggle, and the strength of the spirit and love; and now Brigsby Bear, a Lonely Island production that has so far passed through unnoticed just like 2007’s Hot Rod and last year’s Popstar: Never Stop Never Stopping. One look at the poster for Brigsby Bear and you’d be forgiven for assuming this was another morbid Young Adult book adaptation about a kid grappling with his mom dying of cancer. Like past Lonely Island movies, Brigsby Bear didn’t get much promotion or press, but as with everything else they’ve done, it’ll pass out of theaters quietly and slide right into cult obsession: a perfect ending for a uniquely sad and inspiring movie about creativity, fandom, taste, coolness, and passion being pushed down by a world of vultures and vampires.

Kyle Mooney plays James, a man in his mid-20s who lives at home with his parents and is completely obsessed with a fantasy show called Brigsby Bear: it’s all he talks about at the dinner table, and posters, tapes, toys, and merchandise cover his room. He’s a monomaniacal superfan of this Brigsby Bear. We see all this in the first 15 minutes of the movie—very quickly, sirens approach the family’s house and James’ parents are arrested. It’s revealed that James was kidnapped by these psychos from the hospital the day he was born—he’s never met his parents, and after 25 years, they’re finally reunited. The world is watching, and they all expect James to have a specific reaction: unbridled joy, denouncing his captors and embracing the freedom the full world has to offer him for the first time. But all he wants to do is watch the new episode of Brigsby Bear—which is impossible, because his father was the sole creator of the show, and he can’t continue the series in federal prison.

What follows is an endearing and refreshing take on an otherwise monolithically bleak genre: kidnap victims. This is the anti-Room: James’ fake parents never physically abused him, but there’s no getting around the darkness of two nut jobs stealing a kid and then raising him in an underground bunker and homeschooling him through a semi-psychedelic kids’ show. But every time you think the movie is going to take a predictable turn, it rejects expectations: James’ biological sister takes him to a party, and instead of being mocked by jocks and bros, he’s immediately befriended by a fellow movie-geek and aspiring filmmaker named Spencer (Jorge Lendeborg Jr.). James manages to get some of his Brigsby Bear tapes from a sympathetic detective (Greg Kinnear), and when Spencer sees them, he’s blown away and inspired to help and encourage James in making his own Brigsby Bear movie to continue the story that was so abruptly put on hold.

Brigsby Bear is striking because it covers so much emotional ground in so little time and doesn’t feel half-assed or underdeveloped: there’s everything from Stockholm Syndrome (in one heartbreaking scene, James shows Spencer a storyboard for his Brisgby Bear movie that involves saving his “real parents from Space Jail”), the power and beauty of friendship and overcoming trauma (everyone James meets is very nice and sympathetic—there are no bullies here), the creative urge and its purpose in an otherwise meaningless universe where bad things happen to good people. The film even subverts typical teen movie clichés: James has his first sexual experience with mutual friend Meredith (Alexa Demie), initiated by her at a party. It goes great. Later on, while shooting their movie, James takes Meredith aside, and gravely explains that while he had a good time, he’s “not sure if I can marry you.” Meredith laughs and takes it all in stride. It’s fine.

This isn’t idealized youth: it’s good people, a series of small actions of generosity and empathy that add up to something more positive and life-affirming than most any other picture in theaters now. Towards the end of the film, James, Spencer, and their friends have completed their feature length sequel to the Brigsby Bear series. James can’t stand to watch it in the sold-out theater with everyone else, and Spencer finds him throwing up in the bathroom. James asks his new friend, “What if they don’t like it?” Spencer’s response is perfect: “Who cares?” The reward is in doing the thing you love, not profiting from it or wallowing in its success or failure. It’s such an important message that is seldom expressed in movies otherwise filled with semi-Randian commandments to “BE YOURSELF”—an order that doesn’t necessarily demand self-reflection or doing unto others as you would do unto yourself.

Collaboration is also emphasized: along with Spencer, James works with his sister Louise (Michaela Watkins) and Meredith on the Brigsby Bear movie, all of them completely on board and supportive of James’ singular vision, an accidental auteur that is such a huge fan of this show that he has to see it continue at all costs, even if it means making it himself. Every emotional scenario is conflicted and complicated and not easily explained or boxed in: it hurts to hear James transmute his desire to free his fake parents from “Space Jail” into the plot of his new movie, and even worse, when his biological parents refuse to embrace his Brigsby Bear obsession and are backed up by an unsympathetic therapist (Claire Danes). But who can blame them? Brigsby Bear is the creation of the psychos that stole their son, and to see their son finally return only to cling to the world that his captors raised him in is understandably upsetting and infuriating.

There are no easy answers, and there isn’t enough time in Brigsby Bear’s brief run time of 97 minutes to resolve all the issues presented. But there’s more to chew on here than in most other movies I’ve seen this year, and not as many people will see it in theaters as they should, because it would be impossible to convey the very unique emotional range of this film and convince people it’s just as silly and fun as it is morbid and dark. But Brigsby Bear will be sitting on shelves and streaming across the world soon enough, and I hope they’ll be as taken aback as me and as passionate as James and his friends are.