Leap of Faith: William Friedkin on the Exorcist is another exemplary "making of" documentary by Alexandre O. Philippe (78/52: Hitchcock's Shower Scene). A- 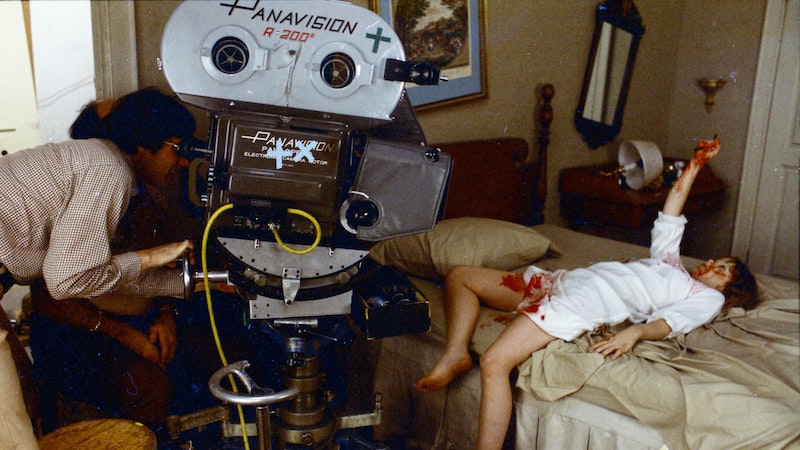 There are some great filmmakers who have nothing interesting to say about their own work. You read interviews with them, you see them at public Q&As at film festivals, and in some cases you'll even read their memoirs, and notice that they have little to share that could possibly add to the popular understanding of their films.

This is defensible. Think of it like Derek Jeter, a spectacular baseball player who never said a single interesting thing in an interview for his entire 20-year career. A great film can often speak for itself. Still, it can be a letdown when a director appears to have given little thought to their movies since they filmed them.

William Friedkin doesn't have that problem. In Leap of Faith: William Friedkin On The Exorcist, the director of the 1973 classic sets before the cameras and talks, at length, about his most famous film. The documentary, directed by Alexandre O. Philippe, has played at festivals since last year, and just landed on Shudder. It's simple, but fantastic—just a master filmmaker going on at length about a classic film, nearly 50 years later.

The Exorcist, released in December of 1973, was adapted form the novel of the same name by William Peter Blatty, who also wrote the screenplay. It's the story of a young girl (Linda Blair) possessed by a demon, and the two priests (Max Von Sydow and Jason Miller), who try to save her.

Famous for its theme song, its non-traditional uses of Catholic iconography, Linda Blair’s creepy performance, and for its location in Georgetown, The Exorcist is a key film in the New Hollywood of the 1970s, and the first horror movie ever nominated for the Best Picture Oscar. There's plenty to chew on for a full-length documentary.

In Leap of Faith, Friedkin, still sharp and spry at 85, talks about the making of the film, the directorial choices he made, his relationships with the actors and with Blatty, what inspired him, and a long discussion of the film's controversial, open-to-interpretation ending.

Some of these are stories that Friedkin has told before. But it's valuable hearing them in his own voice, along with plentiful clips from the film. Friedkin, just a year ago, participated in a documentary called Friedkin Uncut, which looked through his entire career with the help of numerous talking heads. The film was released through a bizarre blockchain scheme, but now can be watched on the streaming services Tubi and Kanopy.

But Leap of Faith is different. It focuses only on The Exorcist, and the only person commentating is Friedkin himself. The director does that Errol Morris/Alex Gibney thing where we'll hear his voice, asking a question, once or twice in the film, but otherwise, it's all Friedkin.

This brings to mind De Palma, the documentary a few years ago that featured Brian De Palma speaking about his entire filmography, and having something valuable to share about just about every one of them. Philippe also directed 78/52, an entire documentary that was entirely about the shower scene in Psycho.