Assange, Maxwell, Smollett, and others reveal truths regardless of verdicts. 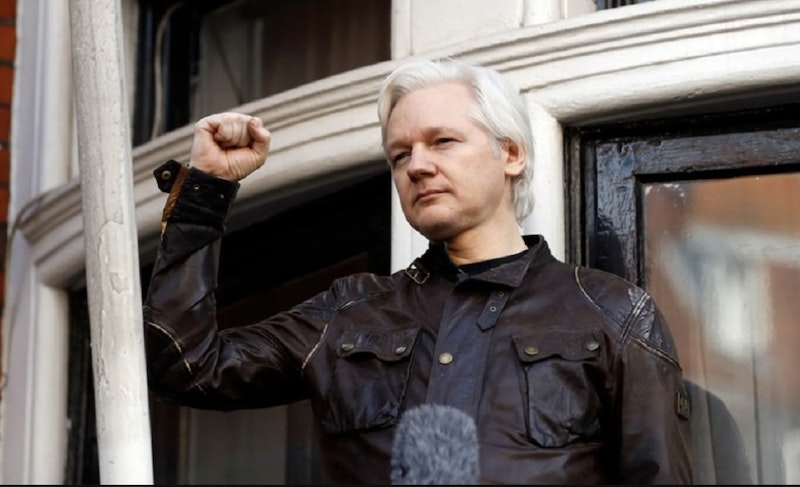 Some legal cases are so politicized that it would be unrealistic to expect justice to be done in the conventional sense (determining one person’s guilt or innocence), or to expect to know even with historical hindsight whether justice was done. The best to hope for, then—and what unites several current high-profile cases—is that a lot of dirt on powerful people will come out in the process. That’s a public benefit even if no one agrees on things like whether the sentence was long enough.

By that standard, a UK court determining that controversial secrets-leaker Julian Assange should be extradited to the U.S. may lead to a trial that could be doubly good for the world: It may incidentally reveal government secrets that Assange’s colleagues dug up, and it may yet end with a mild verdict inspiring more leakers and whistleblowers to follow in his footsteps. By the dirt-revealing standard, it’s almost a meta-trial, telling people how much dirt they can expose. Maybe the best hope for it all ending with Assange free but the U.S. government in a non-vindictive mood would be if he were found guilty but sentenced to “time served” (about two years awaiting extradition but nearly a decade cut off from the world, if you count his time hiding out in an embassy, not that that’s likely to enter into the court’s math).

The recurring topic of UFOs is once more a footnote in all this, since Assange lawyers tried to argue he’s too mentally unwell to be extradited to the U.S.—no matter how much the U.S. government wants to punish hacker-types who reveal its secrets—and oddly enough, there was a hacker who got a look at secret NASA files, which he claims revealed photos of UFOs over Earth, and whose lawyers successfully argued he was too autistic to make extradition from the UK to the U.S. medically compassionate. I’m happy for him, but by that standard perhaps most hackers and leakers are unfit for trial, including, some think, Assange. Maybe that’s okay.

Before you conclude we need harsh standards because nerd leakers will otherwise be spewing secrets willy-nilly, consider how difficult it is to get information out of government through “appropriate channels.” Another recent leaker of U.S. military secrets argues he was only driven to leak after desperately trying to get someone, anyone, in the official bureaucracy, including numerous members of Congress he repeatedly called, to listen to his warning that in his capacity as a government computer programmer he had accidentally introduced a terrible bit of bad code into a vast portion of the U.S. missile system. He was trying to own up to his own error and no one would listen, so he finally went public.

Contrary to what some on the right still believe, the military, like all other government bureaucracies, functions badly and ultimately should be abolished. In the meantime, it deserves some leakers. This should be no consolation to the left: Socialists want everything to work in that centralized, bureaucratic way. Socialists should be greatly embarrassed to hold that unrealistic position. Conservatives merely hold the narrower, though also insane, belief that soldiers, spies, and cops can be trusted to work via government bureaucracy, whereas OSHA and countless other agencies cannot. In any case, the entire political spectrum is naïve—and they all deserve to have their dirty laundry displayed before they get us killed.

The Jussie Smollett verdict—that he faked a hate crime against himself that he claimed Trumpers committed—has rendered justice less by punishing this strange, masochistic/messianic individual actor than by affording us all a reminder how quick and powerful the narrative-making forces were that tried to turn Smollett into a hero for purportedly being beaten. What becomes of him now that he’s been found guilty really is less relevant than the fact we’re forever left with, among other things, the gift of that embarrassing tweet by Vice President Kamala Harris (after the fake beating) declaring Smollett “is one of the kindest, most gentle human beings I know. I’m praying for his quick recovery. This was an attempted modern day lynching.” If nothing else, we will always know a Harris tweet can be as wrong as a Trump tweet.

We will no longer know what the most popular Twitter account tracking the ongoing Ghislaine Maxwell sex-trafficking trial (with a half-million followers) has to say, as Twitter has deleted it, explaining vaguely that the account may have been irresponsibly skewing news coverage (maybe pilfering lines from other news sources while at it). That may be, but with all the injustices in the world and all the nonsense on the Internet, you have to wonder how the establishment happens to find time to limit tweets critical of an apparent elite sex trafficker with ties to intelligence agencies, the publishing world, presidents, and countless celebrities.

As with the Assange and Smollett cases, you get the highly educational impression the establishment is less worried about you, the poor reader/citizen, being misled or put in danger than about really, really embarrassing photos of themselves coming out committing war crimes, fomenting ethnic conflict, or raping teenage girls. People may start to wonder if those are the establishment’s three favorite hobbies, regardless of what the next jury says.