My Rite with Maud

Saint Maud is often predictable, but has two great performances by Morfydd Clark and Jennifer Ehle. 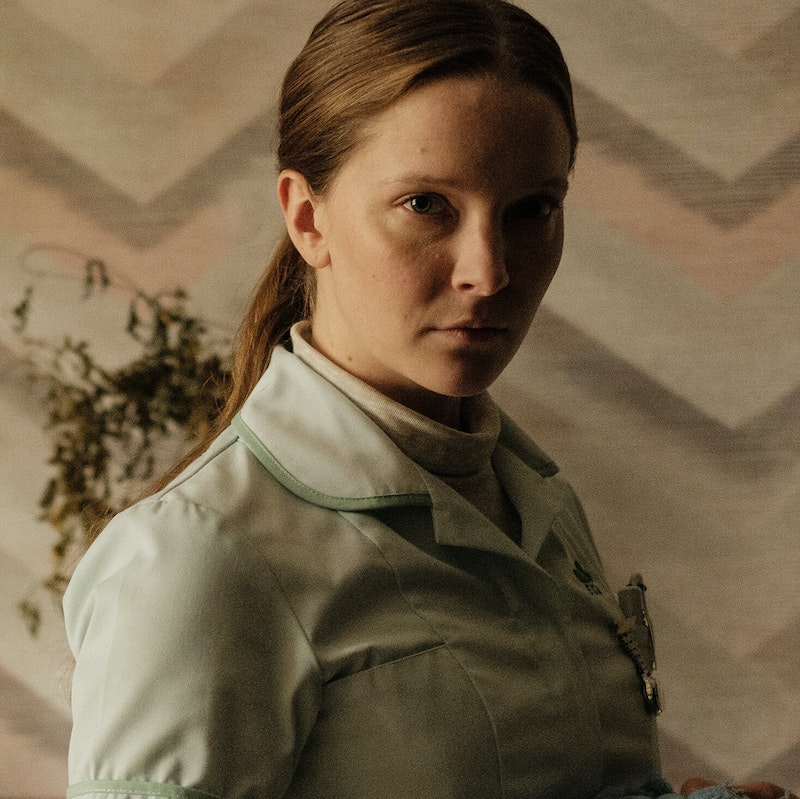 Saint Maud, written and directed by Rose Glass, premiered in 2019 at Toronto, on April 1, 2020 in Austin, and since then it’s dribbled out here and there—virtual screenings, VOD, streaming exclusives, and finally DVD and Blu-Ray release. But like another film held up by the pandemic (and hip surgery), Saint Maud deals with faith and the possibility of prophets in a serious way. And, as in Benedetta, lesbian sex is the crime that must be punished and stopped.

Here, star Morfydd Clark plays Maud, the prude and the visionary, a nurse for a private agency working for a dying dancer played by Jennifer Ehle. Her name is Amanda, and she likes paying young fans to sleep with her in the same house where Maud takes care of her. Problem: Maud can’t stand the sight of elderly, mostly bald Amanda making love with Carol (Lily Frazer). She confronts both Carol and Amanda, trying to pit them against each other, and fails miserably. At a huge party with Maud catering and Amanda dressed like Norma Desmond, the former confidant gets ripped apart in front of everyone by her dying boss for what she did. “Jealous?” Well, obviously. Clark plays the character with such a dead-eyed, dowdy intensity that the possibility of her being a demon or the Devil incarnate is there; in Benedetta, you never think the title character is a vessel for Satan.

That’s a real story, but Saint Maud is more frightening for its deadpan and often brutal dialogue. People have no problem telling Maud that she’s “the loneliest person alive,” “creepy,” and “in need of help.” After falling out with Amanda, she consults God at her tiny shrine, and begs him for answers: “I’ve behaved exactly as I should have, yet here I am. What should I do?” She goes out to a bar, gets smashed, eyes guys and jerks off one in the back, leaving as soon as he climaxes and completely freaks out him and his friend. They leave, and she tries to make friends, but it’s a disaster. Here, as elsewhere, Maud’s social and sexual frustrations manifest in supernatural events that lean demonic: vortexes in clouds, beer, and toilets, not to mention flashbacks to a former patient she possibly (probably) killed blending with her reality to the point of severe accidents.

Ehle is fantastic as Amanda, because she plays every line as dead and straight as it should be: “He’s not real. There’s no one in here but you and me.” Maud can’t handle this, even though she was ready to burn the bed with acetone, and has a “vision,” and Amanda ends up with dozens of scissor wounds in her chest and neck because Maud had a moment. She gets more acetone, walks in robes to the beach, and burns herself alive while a cloud vortex opens up, grows golden wings, and everyone before her bows in reverence. The last shot of the movie appears to be a glorious medium close-up of her salvation—and then there’s a jump scare showing “reality,” a charred and screaming corpse surrounded by black smoke.

Glass’ film is best when it pits Maud against the real world and real people. Carol’s a very modern young woman, and Maud clearly reviles her and everything she stands for. It’s not just her faith, there’s a scrim of white-hot bigotry that Clark gives Maud that makes the movie compelling and more than another overly mannered, dull religious horror movie. So few of these horror films, many of them also distributed by A24, have nothing real going on, and they act like mood is all that matters. Sometimes, but not when it’s a trendy style. Saint Maud looks like a lot of those movies—deep browns, blown-out whites—but it’s broken up by sequences like the party or the boardwalk, where Maud tries walking with nails in her shoe to try and get on God’s good side.

Saint Maud goes out there, and Clark goes even further, and it’s unfortunate that so many familiar and obvious turns are taken: everything about the love triangle, the visions, the climax, her attempts to reach God. Where Saint Maud succeeds is its switching of “visions” and reality, most effective when Maud accidentally crushes the chest of a big guy she’s in the middle of fucking. It’s just a vision—unlike poor Amanda—but it’s a well-deployed shock. Maud’s behavior is unhinged and Clark gives a commanding and convincing performance as someone who may be a prophet—maybe—but she’s too scattered and insane to work His will. Despite its frank discussions of faith and a couple of very good performances, Saint Maud is too locked in and, again, predictable, and when your movie’s about the question of faith, you can’t just show both options at the end and say it’s a choice. It’s a cop-out, and poorly-executed at that. Why bother? We already know Maud is out of her mind. There are more subtle and fresh ways of showing that. Besides, why would I want to know?