A Brilliant Sequel and an Action-Comedy Flop

On Finding Dory and Central Intelligence. 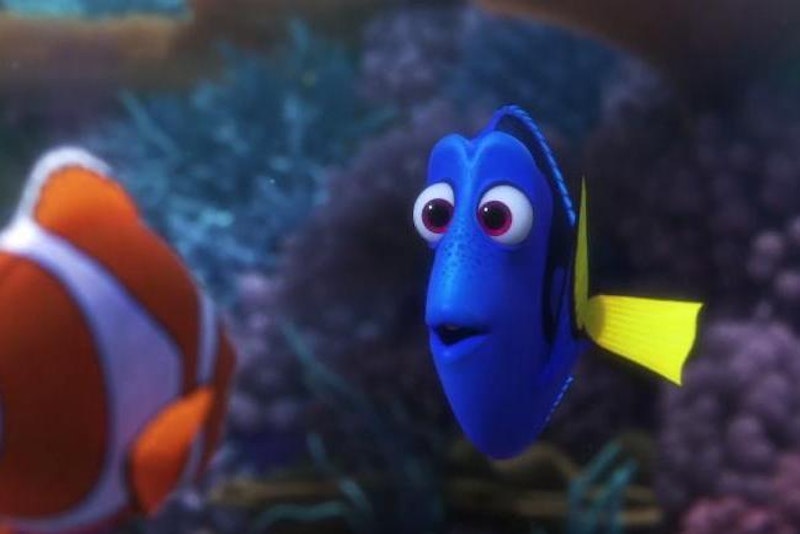 I’m probably in the minority, but I never considered Finding Nemo one of the better Pixar movies. It’s the same thing over and over, and it’s ultimate point—a jeremiad against what’s now known as helicopter parenting—was beaten into the ground. I always thought Dory, the forgetful fish voiced by Ellen DeGeneres, was not only the most annoying character in the movie, but one of my least-favorite in all of Pixardom. Now, 13 years later, we have its Dory-focused sequel. Outside of Toy Story, Pixar hasn’t done well with sequels and its last one, Monsters University, was clearly a revisiting of a universe that had exhausted all of its ideas the first time out.

So I was pleasantly surprised to discover that Finding Dory is delightful. The new movie beats its predecessor for several reasons: it has a better story and supporting cast. It gets more creative with locations, character, and the animation has advanced immensely since the first movie in 2003.

In Finding Dory, set just one year after the first movie, the titular Blue Tang fish looks for her lost parents. She’s helped by Nemo and his father Marlin, along with a new cast of characters: there’s Hank the cranky octopus (voiced by Ed O’Neill) and a bickering shark and whale (Kaitlin Olson and Ty Burrell.) Fans of The Wire will be glad to know that a pair of sea lions are voiced by McNulty (Dominic West) and Stringer Bell (Idris Elba.)

In a brilliant stroke, the new movie is set not in the ocean, but rather in a California aquarium, opening all kinds of storytelling creativity. And the part involving the search for Dory’s parents is quite moving, with a perfect payoff as well as a lesson that isn’t as belabored as in the first film.

After last November’s The Good Dinosaur—which I’d completely forgotten everything about by the time I got in my car afterwards—Finding Dory is a return to form for the animation studio.

Central Intelligence, the stunning failure of an action adventure/comedy from Dwayne Johnson and Kevin Hart, is full of miscalculations large and small, but the biggest one is this: it pairs two very funny men, who should be hilarious together, but they’re not. Hart is the hottest comedian of the moment, with a long track record of excelling on-screen when he’s paired with a partner, especially one who’s more of a traditional tough guy/man’s man than he is (See: Ice Cube in the Ride Along movies.) Johnson, while known mostly these days as an action star, has considerable comedic gifts, which has been evident since his pro wrestling days. Pairing the two of them should work, but it just plain doesn’t—partially because the chemistry just isn’t there, and also because the structure of the film is such a mess.

Central Intelligence was directed by bad comedy perennial Rawson Marshall Thurber (Dodgeball, We’re the Millers) and is effectively three different, unrelated movies, packed into one. There’s the comedy of high school reunion anxiety, in which Hart is the ex-big man on campus who thinks his whole life is a failure even though he has a beautiful wife, house and a great job. He reconnects with the formerly fat high school nerd who was viciously bullied back in the day but is now, well, The Rock.

Johnson, of course, turns out to be a CIA agent, who pulls Hart into the action and mayhem. But, Johnson may in fact be a double agent, and the third act is a Miami Vice-like drug thriller that looks and feels nothing like anything that came before. Not only do the three movies not fit well together, but none is very good on its own, either.

Sticking a good-looking movie star in a fat suit hasn’t been funny for at least 20 years, even if they’re not subjected to grotesque sexual harassment. The movie hints at doing something interesting with the Johnson character—kind of giving him a wacky personality that’s against type, like the actor's characters in Be Cool and Pain & Gain—but doesn’t commit to the bit, and lets his personality diverge wildly from scene to scene. If you want to see a good comedy about a killer and his high school reunion, watch Grosse Point Blank instead.