Film Review: The Ballad of Buster Scruggs is Compromised

As a movie, The Ballad of Buster Scruggs feels like… a TV series. B 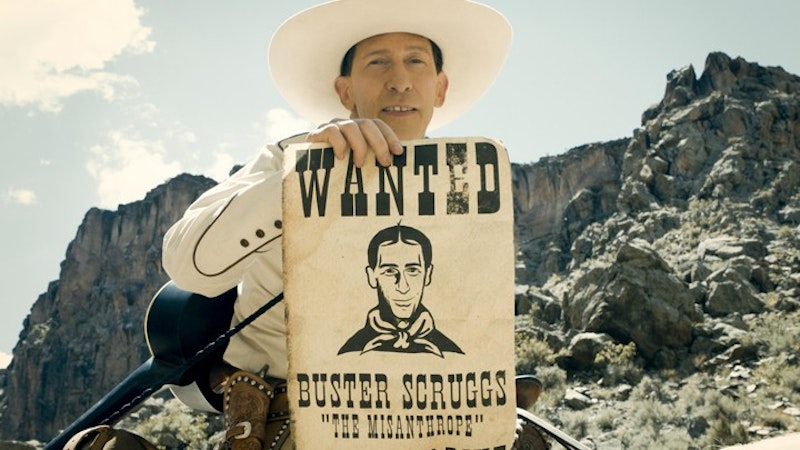 The Ballad of Buster Scruggs, the new Western anthology film from Joel and Ethan Coen, begins with a sequence that's not only one of the most entertaining pieces of cinema the Coens have ever produced, but serves as a microcosm for numerous themes and tones that they’ve explored throughout their careers. It might be the best 15 minutes of any film this year. Unfortunately, the film never reaches that level again.

The Coens have explored Westerns before, most notably for their acclaimed version of True Grit, while others of their efforts, especially No Country For Old Men, and have touched on the genre. Buster Scruggs was originally planned as a six-part anthology series for Netflix, the Coens' first major project for television. A few months ago, a theatrical release was added, although the film will still arrive on Netflix November 16. The project represents a big swing for the Coens, but beyond that wondrous opening sequence, there's nothing here that will rank with the best of their work.

Buster Scruggs, played by Coen veteran Tim Blake Nelson, is a prototypical singing cowboy who's also the world's greatest gunslinger. The 15-minute opening sequence tells a story with a beginning, middle, and end, complete with the usual Coen touch of combining comedy and shocking violence. Surprising and hilarious, it's just about a perfect piece of cinema.

You can understand why the Coens put this one first, because the subsequent chapters aren't quite up to par. Other than Nelson, the directors don't borrow much from their usual company of actors—there's no Clooney, Buscemi, Jeff Bridges, John Goodman, or any actors from the Coens' more recent films—but they also don't quite make the best of some newer faces.

The second one, with James Franco as a bank robber, starts out strong with a sequence between Franco and Stephen Root, but ends up lackluster. The third, with Liam Neeson as an impresario traveling with his armless, legless thespian charge, is pointless, wasting the Coen debut of an actor who seems like he should be a natural in the brothers' milieu. The fourth story, (a mostly) solo effort starring Tom Waits as a gold prospector, is better on paper than in actuality.

The longest chapter is the fifth, which stars Zoe Kazan as a young woman chasing marriage prospects, before falling into a sweet romance with a cowboy (Bill Heck.) Kazan is another actor who fits well in the Coens’ world, even if the story itself is kind of a letdown.

The final tale is the only one that even approaches the Buster segment. In this, the Coens borrow a page from Quentin Tarantino's Hateful Eight, in the form of a discussion among a group of mismatched stagecoach passengers (both films were influenced by John Ford's Stagecoach.) Tyne Daly, seen last month in the great indie film A Bread Factory, steals the show as a character known only as "Lady," although also in the coach are Saul Rubinek, Brendan Gleeson and Chelcie Ross, as the story goes to some surprising places.

We weren't supposed to get a new Coen Brothers movie this year, and in fact, they have no announced film projects in the works at present. As a movie, The Ballad of Buster Scruggs feels like… a TV series. The distinction likely won't matter to most who fire this up on Netflix. For those that do, I’d advise watching the first segment, skipping to the fifth and sixth, and then watching the first again.