Get Out and the female protagonists of Blumhouse. 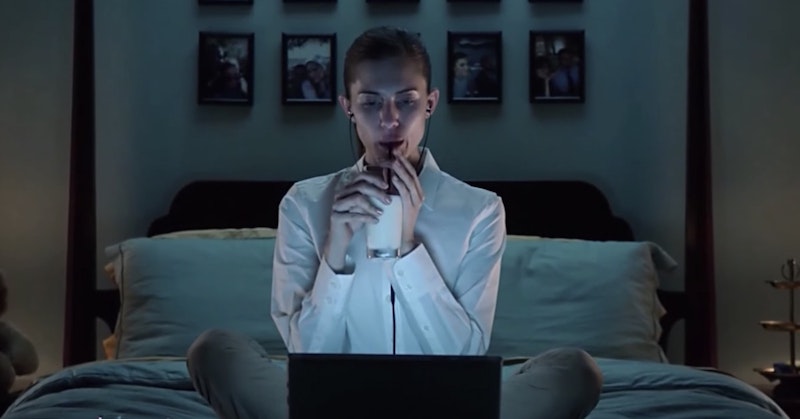 This is part of a series on Blumhouse horror films. The last entry on Curve is here.

Jordan Peele's Get Out (2017) is justly famous for its use of a horror film to address racism—or for its depiction of racism as a horror movie. But in the context of Blumhouse's catalog, what's most interesting about Get Out is the way that it both reproduces and mocks the empowered white woman final girl of horror movies in general, and of Blumhouse films in particular.

The plot of Get Out is a vast conspiracy against black people—which resonates because racism is a vast conspiracy against black people. Chris Washington (Daniel Kaluuya), who’s black, goes to visit the suburban family of his white girlfriend Rose Armitage (Allison Williams). Rose and Chris commiserate about her family's uncomfortable, low-key racism—her father Dean (Bradley Whitford) insists on telling Chris about his love for Obama, her brother Jeremy (Caleb Landry Jones) tells Chris that given his biological makeup, he could be a beast with training. The family's black servants Walter (Marcus Henderson) and Georgina (Betty Gabriel) smile with disturbing constancy and insist that they love the Armitages.

Finally, Chris figures out that the Armitages are engaged in a sinister plot to hypnotize him and then perform brain surgery to put a white person's mind in his helpless body. They do capture him, but he manages to escape, murdering all of them (impaling Dean with his own deer-head trophy) before staggering to safety with his friend and last minute rescuer Rod Williams (Lil Rel Howery).

Get Out is filled with wonderfully eerie performances. Lakeith Stanfield as a terrifyingly polite man wearing the clothes and the smile of a white senior citizen is but one highlight. Even in this company, though Allison Williams' transformation from bubbly, hip anti-racist good white girlfriend into expressionless white-turtle-necked slave-catcher honey-pot, who drinks milk separate from her Fruit Loops so the colors don't mix, is stomach-churning. The other Armitages are always weird, unpleasant, and ominous. But Chris trusts Rose. Underneath even the best white people, Rose seems to warn, there lurks the same slack hunger for power and death.

Making Rose the epitome of evil neatly reverses the usual moral economy of horror films, in which white women are typically the persecuted innocent heroes, not the persecutors. In her classic horror study, Men, Women and Chainsaws (1992), Carol Clover explains that slashers feature women heroes because women are perceived as vulnerable and weak. When men or monsters threaten them, it creates a sense of overwhelming, inescapable, undefeatable menace.

Clover doesn't say that vunerability is racialized as well as gendered. But it is. Black women are frequently invisible in Hollywood, but when they’re portrayed they're often shown as angry and tough, competent. They don't get the benefit of narrative chivalry, which positions white women as delicate, innocent, and endangered.

In Blumhouse films, the stories often compound or build on white female vulnerability. Hush features a white woman protagonist who is deaf; her disability makes her even less able to fight back against her stalker. Curve is about a white woman who spends much of the film trapped in a car, the constriction again emhasizing her weakness and helplessness. In Split the kidnapping victim is also a long-time victim of sexual and physical abuse. In the 2018 reboot of Halloween, Jamie Lee Curtis is well into her 50s; not just a white woman but an older white woman.

The ultimate point of emphasizing white women's vulnerability in horror films, according to Clover, isn't terror, but empowerment. The final girl in horror always grabs hold of the knife and improbably turns it onto her assailant. White women's weakness adds giddy drama to the final gout of blood and revenge. It's because white women are so disempowered that their empowerment is so explosive and satisfying.

After viewing Get Out, though, white women's sudden accession of power looks less like an unexpected revolution, and more like a reassertion of a buried status quo. Skinny, petite Rose looks soft and harmless, but that's a deception. Even at the beginning of the film, before we see her evil, there’s evidence that she's far from helpless. When she and Chris hit a deer and call the police, the cop who shows up asks to see Chris' ID, even though he wasn't the one driving. Rose uses her whiteness and her obvious affluence to bully the cop into backing down. Chris, afterwards, quietly tells her that her display of (social) strength was "hot." That's a thumbnail explaining at least some of the male viewer investment in these stories of white women unexpecteldy empowered. White women grabbing and wielding the phallus is sexy.

It's less exhilarating, though, when you realize the power in question is in part whiteness. The final girl is able to turn the tables and murder the evil stalkers attacking them. But Get Out reminds you that white women have historically been able to bring down horror and death on certain people labeled as criminals and stalkers, as long as those people were black. White feminists in the 19th century often supported lynching as a way to supposedly protect endangered women from back male marauders. Claims of weakness and fragility were leveraged to perpetuate systematic racist terrorism. When that final white girl symbolically castrates some evil degenerate, the spirits of the people actually castrated in the name of white women's weakness hover nearby.

Rose isn't the only malevolent white women in the Blumhouse catalog. While horror can celebrate women's revenge, it also has a long tradition of misogynist anxiety about women's power, and those two impulses can mix together in various ways. Katie (Katie Featherston) in Paranormal Activity, for example, is possessed by a demon who both embodies fears of out-of-control women and impels her to wreak a feminist-tinged revenge on her gaslighting asshole boyfriend Micah (Micah Sloat.) The protagonists in Truth or Dare spark an apocalypse in the name of sisterhood.

The ambivalence around female proagonists in other Blumhouse films is a reminder that evil in women is often seen as particularly loathsome, volatile, and enraging. There's a reason that Rose is the movie's most hateful character, despite the fact that her grandfather and father instituted the system of racist kidnapping and torture in which she (enthusiastically) participates. But if other Blumhouse films let you see some of the misogyny in Get Out, Get Out, in turn, gives back to all those final girls their whiteness, as both power and indictment. When you watch Laurie Stode kill Michael, or Ripley destroy the aliens, or all those other white women horror protagonists obliterating all their powerful, monstrous, debased, twisted, impure antaongists, you are, in part, cheering for Rose.