This is the first in a series on colonial war films, focusing on the U.S. experience in Vietnam, Afghanistan, and Iraq. 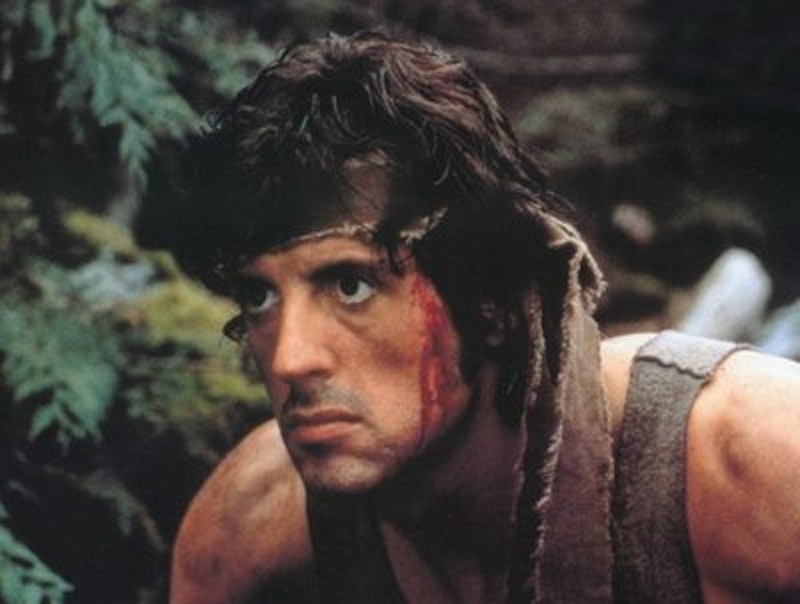 Obviously, First Blood isn't usually classified as science fiction. There are no light sabers or warp drives, and John Rambo (Sylvester Stallone) is an unstoppable human Green Beret, not an unstoppable Terminator from the future. The plot involves Rambo, a Vietnam vet suffering from PTSD, going rogue after being detained by asshole sheriff Will (Brian Dennehy) in a small town in Washington state. Rambo escapes the police, hides in the woods, and kills or (mostly) wounds a couple hundred law enforcement officials before being convinced to turn himself in. It's an unlikely story, but not a futuristic one.

Science fiction isn't only defined by advanced technologies and advanced calendar dates, though. In his book Colonialism and the Emergence of Science Fiction, John Rieder argues that one of the most important characteristics of sci-fi is a fascination, and often reversal of colonial experiences. The War of the Worlds, as one iconic example, imagines what would happen if Martians invaded Britain, and did to the English what the English had done to the Tasmanians (Wells mentions the latter by name.) The Thing, from the same year as First Blood, is an analagous tale; an alien ichor falls to earth, absorbing and transforming American scientists into things, just as America has spread its culture across the globe, infecting and assimilating all else to its own image.

First Blood uses this exact same reverse colonial conceit. The film is framed as a sympathetic brief for veterans; in the opening of the film, a stuttering, deferential Rambo seeks out a friend who, it turns out, has died of cancer from exposure to Agent Orange. But the concern for ex-soldiers quickly dissolves into a fever dream about the terrifying threat of those same veterans. Expert American killers went into the jungles of Vietnam to kill; what if those American killers came and attacked us? "There are no friendly civilians," Rambo says coldly. In Vietnam, that was a brief to burn the village in order to save it. And, sure enough, Rambo burns and destroys much of the small town of Hope, Washington. Just as the Martians turned England to Tasmania, so Rambo turns the Pacific Northwest into Vietnam.

You could argue this transplantation puts Americans in the shoes of the Vietnamese—just as Wells suggested that being invaded by Martians might lead his Britishers to understand the plight of Tasmanians. And it's true that First Blood has an unusually Catholic point of view for an action movie. The film follows Rambo for its first half hour or so, sympathizing with him as he is harassed and imprisoned by the local police. The film even explicitly links the small town cops, who spray Rambo with a hose and beat him in his cell, with the Viet Cong who imprisoned and tortured Rambo during the war. Rambo is set on his path of mayhem when he has a flashback, in which the police beating him are interposed with images of his torturers.

After Rambo escapes, though, the film suddenly stops tracking him, choosing instead to follow the police officers as they thrash helplessly through the Pacific Northwest forest, blundering into Rambo's traps and getting picked off one by one. Where before the police were the North Vietnamese enemy, suddenly in the middle part of the film, it is Rambo, lurking in the forest, who is the stealthy adversary, and the police who are the American grunts out of their depth, calling in helicopter cover to no avail.  At the climax in the middle of the film, Rambo holds a knife to Will's throat, and tells him to back off before he starts a war he can't win. That war is the pursuit of Rambo, but also Vietnam itself. Rambo is speaking for southeast Asia. When the wise Green Beret commander warns Will that his people are going to come back in bodybags if he attacks Rambo, he could be speaking, retrospectively, to the United States, which attacked North Vietnam with overwhelming force, and ended up with nothing for their troubles but a lot of corpses. Will, for his part, could be Lyndon Johnson, blustering on about his responsibility to protect as he staggers into escalating catastrophe.

The analogies have their limitations. It's notable, in particular, that however the perspective shifts back and forth, the victim is always America. This is true in that virtually everybody in the film (except for those brief malevolent Vietnamese in the flashbacks) is a white American. But it's more broadly true in terms of the film's sympathies. In the forest scenes, Rambo is presented as a superman; he sustains minor injuries, but basically is an unstoppable force. There is no real effort to confront the fact that the war resulted in many more Vietnamese dead than American. Those incompetent police wandering through the woods should, by all rights, be mowing down Rambos in large numbers, before being forced to retreat themselves. Vietnam in the person of Rambo is figured as an invincible, invulnerable enemy. The Green Beret commander says Rambo ignores pain and setbacks in a speech that really does make him, and by extension the North Vietnamese, sound like one of those Terminator robots, rather than human beings. When the film flips around to express sympathy for Rambo's vulnerability, it does so explicitly by criticizing anti-war efforts. How dare protestors attack the troops when they haven't had their experiences, Rambo rages.

The point of the film is precisely to get viewers to understand, and identify with, veteran experiences. First Blood, like war films, and for that matter like War of the Worlds, is trying to get its audience to imaginatively put itself in the place of those who suffer. First Blood is supposed to bring the war home; it is meant to confront civilians with their complicity.  Vietnam is placed in rural Washington to show "there are no friendly civilians." Everyone is complicit.

The question is, though, complicit in what? In bringing Vietnam to America, First Blood erases the fact that the real crime of the war was that Americans went to Vietnam. Even the title of the film reflects this confusion; Rambo mutters that the police forced him to violence by drawing "first blood." This turns Vietnam into a personal grudge…which doesn't make any sense at all. America was not attacked by Vietnam and forced to retaliate. Nor was Vietnam fighting to revenge itself on America. The United States parachuted into a conflict that it had little to do with; the Vietnamese fought American troops while they were there because they were there, not because anyone drew first blood. Vietnam is not meaningfully a personal revenge story.

Transplanting First Blood to America is a way of making the war intimate and accessible. But the Vietnam war was not intimate and personal for the United States. It was a colonial proxy war, whose effects were overwhelmingly felt by people who were not Americans. Soldiers and veterans suffered horribly, but a film that makes the war about them alone can't help but dissolve into moral confusion and self-justification. If Americans are the only people in the world, then Americans are right, one way or the other. Reverse colonial sci-fi is less an assertion of sympathy with the oppressed than a insistence that we don't deserve to have done to us what we did to them. First Blood only cares about the blood of Americans. As such, it's not imagining a new tomorrow without Vietnams. Rather, it posits a future in which America is ever more successful at becoming everywhere.