Misogyny Will Save Us From War

So says MASH. It's not very convincing. 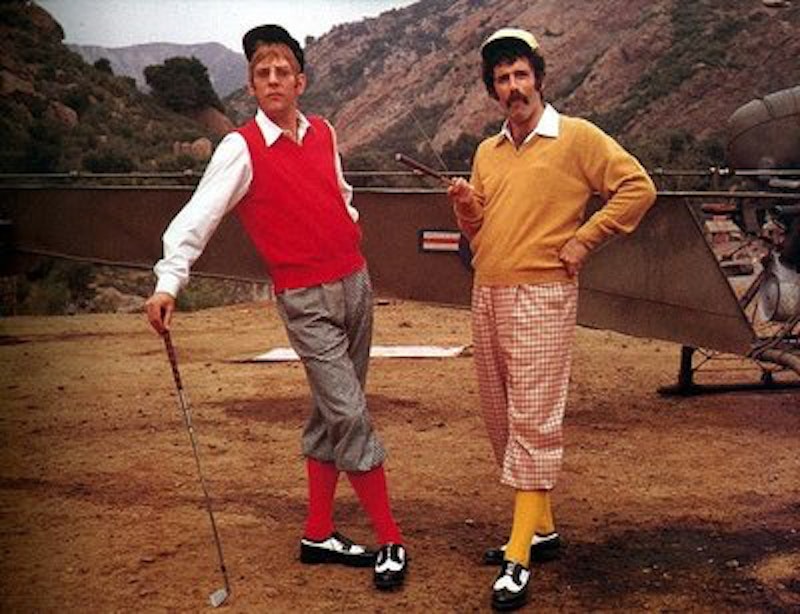 This is part of a series on latter-day U.S. colonial wars. The previous installment, on Eastern Condors, is here.

The main joke in MASH is sexual harassment. Robert Altman's 1970 Korean War film about emergency medical personnel is structured around a series of vignettes, but the most consistent through line is the conflict between wacky laid-back surgeons Hawkeye Pierce (Donald Sutherland) and Trapper John (Elliott Gould) and uptight bombshell head nurse Margaret Houlihan (Sally Kellerman). In the context of the Vietnam War of the era, Hawkeye and Trapper are countercultural rebels; Houlihan is the uptight military establishment. By screwing Houlihan over, the surgeons are supposed to be showing the foolishness of war and satirizing the military. In fact, the film simply cosigns the military's smug patriarchy; it has all the committed anti-war zeal of a frat party.

Houlihan is upset at the surgeons’ drinking, womanizing and lax discipline. She and religious dolt surgeon Frank Burns (Robert Duvall) try to impose order and a respectful working environment. In retaliation for her meddling, Hawkeye and Trapper bug her tent and broadcast her having sex over the camp PA system, harass her by referring to her as "Hot Lips," and expose her to the entire base while she’s taking a shower. When she complains to the commanding officer, he sneers at her humiliation and dismiss her concern. The commanding officer's commanding officer sums up the reaction of the chain of command: "Who, Hot Lips?" he says. "Screw her."

Hawkeye and Trapper bully other women administrators too, and sexualize the nurses they work with. The fact that the nurses are portrayed as generally enjoying the attention neatly elides the fact that superior officers are systematically pursuing sexual relationships with the people they're supervising. Houlihan outranks the surgeons in theory, but in fact the old boy's network makes sure that her efforts to intervene on behalf of the nurses (which is her job as head nurse) are ineffectual. Because she’s trying to advocate for other women, she’s subjected to a brutal campaign of sexual abuse and humiliation that reduces her to tears. She eventually sleeps with Duke Forrest (Tom Skerritt) one of her tormentors, a plot twist that’s designed to emphasize her defeat and absolve her harassers.

Houlihan is supposed to deserve what she gets both because she's a jerk and her insistence on military discipline makes her a stand-in for the army itself. In her recent book Kill All Normies, Angela Nagle points out that women are often associated with the status quo so that counterculture resistance can be framed in terms of misogyny. Trapper and Hawkeye are rebellious, cool, and irreverent not because they speak out against the war explicitly, but because they hedonistically ignore staid sexual norms.

Practically the first thing Hawkeye does when he arrives at the MASH unit is push himself on, and make sexual innuendos about, a nurse he instantly christens "Dish" (Jo Ann Pflug).  Dish is married, but she ends up sleeping with Hawkeye anyway. He even convinces her to sleep with someone else. The guy in question is a well-endowed dentist who after one instance of impotence convinced himself that he was homosexual and was intent on killing himself because gay people cannot suffer themselves to live. Through an elaborate plot, Hawkeye gets Dish to have sex with the dentist, curing him of his insecurity, and not coincidentally demonstrating Hawkeye's own masterful anti-establishment virility.

This has virtually nothing to do with questioning the Korean conflict, or war in general. Misogyny allows Trapper and Hawkeye to present themselves as cool and rebellious, but it doesn't allow them to actually rebel in any meaningful way. Neither of them ever criticizes the violence. The closest they come to an act of resistance is when they make an effort to help a Korean youth who they have paternalistically adopted as a servant (they teach him to make martinis.) He’s about to be drafted, and they try to give him drugs to increase his heart rate so he'll be found unfit. The Korean doctor sees through their ruse, though, and the kid is drafted anyway. The Korean boy is never mentioned, or apparently thought of, again.

The misogynist pranks don't just substitute opposition to the war; they actually make war look kind of fun. Korea in MASH comes across as an adolescent vacation. Trapper and Hawkeye sleep around, drink, and even get a luxurious vacation to Japan, complete with golfing and a detour to a brothel. The film shows glimpses of men wounded in battle being sewn up on the operating table, but since none of those men is ever given a story, or even a speaking part, it's difficult to identify with them. It's easy to see why Trapper and Hawkeye seem reluctant to go home. Korea has good friends, good times, sex, booze, and fun. Who wants to head back to the States and its boring rut of marriage and conformity?

MASH frames the conflict of Korea as a battle between feminized authoritarians like Houlihan and swaggering rebels like Hawkeye. Hawkeye wins, which means that there’s sex, gambling, and mischief for all. The hippies are victorious and the war is groovy, which is no doubt a great comfort to the Koreans and Americans getting slaughtered on the battlefield. The new swinging patriarch may replace the old fuddy-duddy patriarch, but misogyny is still misogyny, and war is still war. MASH thinks that's a good thing. Though the film has a few funny bits, it has no satirical edge or purpose—just the callous indifference you'd expect in a narrative that believes sexual harassment is the height of humor.