A unique heist film. A- 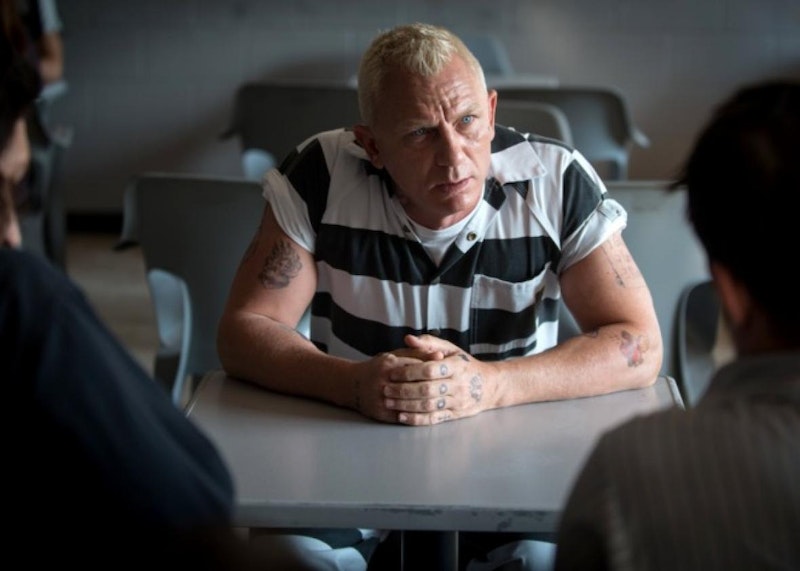 Director Steven Soderbergh has ended his brief “retirement” with the glorious Logan Lucky, an original heist film that features some of the best work by several members of its talented cast. Soderbergh had long spoken of retiring from directing feature films, and a lot of the times he said that was during interviews to promote the two-three films he was making per year for most of the early part of this decade. Even while “retired,” Soderbergh made a prestige cable show (The Knick), and also participated in the production of such films as Magic Mike XXL. And now he’s back for real, with no signs of rust at all.

Soderbergh, of course, directed Ocean’s Eleven and its two sequels, and the genius of Logan Lucky is that it’s a heist movie that’s structured almost exactly like those films, even hitting a lot of the same plot beats, yet the style and setting are so radically different. Still, it's thrilling, and also frequently hilarious.

Logan Lucky features the Logan family, a clan from West Virginia that’s said to suffer from a family curse. Jimmy (Channing Tatum, featuring notable extra flab) is a fired employee of the Charlotte Motor Speedway who decides to carry out a heist of that very speedway. In this he enlists his brother Clyde (Adam Driver) who lost part of his arm in Iraq, his sister Melly (Riley Keough), an authoritatively sexy hairdresser, and the wonderfully named Joe Bang (Daniel Craig), an imprisoned demolitions expert.

This isn’t another Hell or High Water—the heist plot isn’t motivated by politics or revenge, nor is the film attempting to make any type of Hillbilly Elegy-style point about the hopelessness of rural America. But it does set itself in a milieu and physical location that are rarely glimpsed on screen these days.

But what it has going for it is a really smart plot, one that comes together just as well as the one in Ocean's Eleven. This doesn’t look anything like any other heist film. The script is credited to “Rebecca Blunt,” a first-timer who allegedly doesn’t actually exist; “Blunt” has been rumored to be anyone from Soderbergh itself to his wife, former E! network correspondent Jules Asner. The leads are all outstanding, with Tatum finding a different gear than usual and Driver—one of the few present-day actors with an actual record of military service—playing a lived-in character too. The real revelation, though, is Craig, playing a character who’s about a 180 from 007—white hair, a Southern accent and funny.

The supporting cast is pretty deep too, including a welcome Katie Holmes as Tatum’s mean ex-wife and Dwight Yoakam—who should really be in movies all the time—as a prison warden. Even Seth MacFarlane has a dynamite supporting role as a British douchebag; the key to the performance is he looks and sounds nothing like MacFarlane usually does. And Hilary Swank is brilliantly deadpan in a brief role as an investigator.

Soderbergh is back, even if it felt like he never left, and Logan Lucky is a welcome and winning return.

Patti Cake$ Is Clichéd But Gets Spark From Danielle Macdonald. B

Patti Cake$ follows the same template as music underdog movies of the past like Purple Rain, Eight Mile, and Hustle and Flow, hitting many of the same beats and ending up in more or less the same place. There are a couple of key differences that make Patti Cake$ stand out: A very specific sense of place and a star that’s uniquely talented. Directed by Geremy Jasper, Patti Cake$ earned positive notices at Sundance in January. It’s the story of a young, plus-sized white female rapper, and her quest to escape her circumstances and attain rap stardom.

Set in a particularly poverty-plagued section of Northern New Jersey, Patti Cake$ tells the story of Patti (Australian actress Danielle Macdonald) who forms an unlikely supergroup along with her South Asian male friend (Siddharth Dhananjay), a black metal performer who lives in a shack at the cemetery (Mamoudou Athie) and… her grandmother (Raging Bull’s great Cathy Moriarty). Bridget Everett, the comedian/cabaret singer who always shows up on Amy Schumer’s show, acquits herself well in a rare dramatic role as Patricia’s alcoholic mother.

Patti Cake$ repeats many clichés, and at times seems to be following Eight Mile, in particular, beat for beat. But I liked it for the simple reason that Macdonald is such a unique screen presence, and actually a pretty decent rapper. I also admired the film’s lived-in sense of place.

The Hitman’s Bodyguard Is Ridiculous But Fun. B+

The Hitman’s Bodyguard arrives in the dead of August, with little buzz and almost no promotion. So what a surprise that it turns out to be one of the most consistently enjoyable movies of the summer. What this action buddy comedy lacks in originality and plausibility, it makes up for with a whole lot of fun, helped by a pair of stars who are clearly having the time of their life.

The film stars Ryan Reynolds as a disgraced former elite bodyguard, and Samuel L. Jackson as perhaps the world’s most prolific assassin. They’re longtime rivals who are forced, for very contrived reasons, to work together, in order to ensure the conviction on war crimes charges of the former president of Belarus (Gary Oldman, bringing back his old Air Force One accent). This entails, as is the genre custom, leapfrogging among European capitals (London, Amsterdam, The Hague), and laying waste to bad guys and buildings in all of them.

It’s the sort of film in which there’s a big speech at the end about how the bad guy must be punished for his killing of innocents, as if we didn’t just witness two hours of huge crashes and explosions in multiple crowded cities. The last seven days of world events, for what it’s worth, aren’t going to be kind to this movie’s reception or reputation.

Directed by Patrick Hughes, whose most prominent previous credit was the third Expendables movie, the film delivers creative, confident action set pieces, complete with a score, by Icelandic composer Atli Örvarsson, that’s more like a parody of an action film score.

The other highlight is the bickering chemistry between the two stars, who really are great together. Also great? Salma Hayek, in a small but wonderful role as Jackson’s estranged wife. Yes, it’s Jackson once again playing a professional hitman who says “motherfucker” a lot. More impressive is that Jackson is 68, and he’s believable as an action star, even now.

The Hitman’s Bodyguard is over the top to a ridiculous degree, but it does what an action comedy should do: It combines really well-done action with lots and lots of laughs.