Coastal Elites is a smug, self-defeating dud that has nothing new to say about the Trump era. D 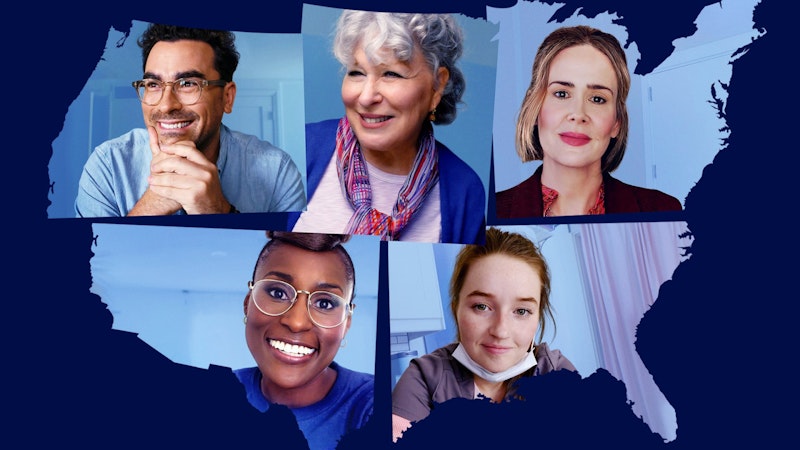 At some point during the opening segment of HBO's Coastal Elites, probably after the fourth or fifth time Bette Midler mentioned The New York Times, a thought occurred to me: Why does every single Hollywood-produced piece of political satire in the Trump era say the exact the same thing?

Coastal Elites, which was originally conceived as a play by playwright/screenwriter Paul Rudnick, was later reconfigured into an HBO movie that debuted last week, under the direction of Austin Powers, Meet the Parents and Bombshell veteran Jay Roach. It consists of a series of monologues, by actors playing the titular elites, in which they share what it's like to be a certain kind of blue state liberal in the age of coronavirus and Trump.

Leave aside that COVID-era movies and TV shows assembled entirely from the equivalent of Zoom calls is an aesthetic art form that I'm already sick of, even though it’s only existed for about six months. Two things in that format have been the slightest bit watchable—the quarantine episode of the Apple TV+ show Mythic Quest, and the "virtual" NFL Draft. Everything else has been awful, including Coastal Elites.

The characters are all familiar, and in some cases, their stories go in interesting directions, until they start ranting about Trump, Pence, and/or Ivanka. They're the sort of people who you've probably logged off of Facebook to avoid.

Bette Midler, in the first monologue, plays a walking New York Jewish lady stereotype—picture Mike Myers' old Linda Richman character, but a lot less funny—recounting the time she got into an altercation with a MAGA hat-wearing man in a Starbucks. The goal is to present us with an anti-Trumper with all the rage and resentment of a caricature of a MAGA rally attendee.

The second monologue, with Schitt's Creek's Dan Levy, gets off to a better start, as he shares the dilemma of a gay actor wrestling with the decision of whether to take on a stereotypical role. It's compelling, at least until Levy yells about Pence. The third has Insecure's Issa Rae telling a story about her rich banker father's invitation to the White House, and Ivanka's doomed quest to befriend her.

In the fourth, Sarah Paulson starts by parodying what appears to be a meditation YouTube channel, before pivoting to the monologue you've probably heard a thousand times from different people about how she can't believe her whole family loves the president. The punchline, involving her father's unwillingness to vote for Trump again due to his comments about not liking John McCain because he got captured, is undercut by those comments having happened over a year before the 2016 vote.

The final monologue, with Booksmart's Kaitlyn Dever, was my favorite, since her nurse character isn't actually a coastal elite herself.

The problem with Coastal Elites is that it has the same worldview of every other mainstream Hollywood work that’s tried to wring satire out of the Trump era. It concedes that Trump is awful and that his supporters are racist buffoons. But it also devotes energy to getting across that opponents of Trump are elitist, smug, and out of touch. So they hedge, in a way that allows the liberal filmmakers to pat themselves on the back, believing they've made a movie that’s not only fair, but is for everyone (when really, it's for no one.)

This is what Jon Stewart's recent movie Irresistible was about, and The Oath, and The Hunt, and the majority of Trump-era political SNL sketches, especially that recurring bit where Scarlett Johansson's dog can talk, and turns out to love Trump.

Why is this the only conclusion that Hollywood can draw from the current political moment? Why not find some other angle, one that’s biting, funny, or surprising? I imagine the vast majority of people who’ll watch a movie like this are liberal cultural elites themselves, and will likely recognize some of the content in their own behavior, while I also assume the number of Trump fans who’ll watch is almost nil. I may be voting the same way as all of these characters, but that doesn't mean I wanted to spend more than a few minutes with any of them.