Film Review: Baby Driver Is One of the Year’s Most Confident Films

A stunning success for director Edgar Wright. A 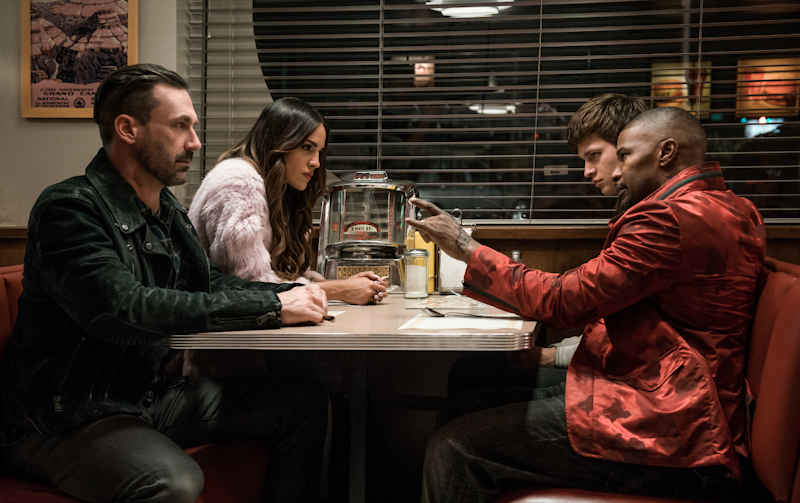 Baby Driver may be the movie Edgar Wright was born to direct. A rollicking action/adventure/comedy/romance/musical that finds a dynamite angle and sticks with it. Here’s a film that’s fun, and totally unabashed about it.

Named for a Simon and Garfunkel song, which is one of about 40 pop songs of the past that dot its soundtrack, Baby Driver has a hell of a hook: Ansel Elgort plays a getaway driver for a gang of robbers, and due to tinnitus in his ears, he must listen to music through earbuds at all times. As for the name? He’s a driver, and his name is “Baby.” Almost exactly 30 years after Dirty Dancing, finally another movie has a protagonist named “Baby.”

A wonderfully menacing Kevin Spacey plays the gang’s mastermind, with other crewmembers including loose cannon Jamie Foxx, sleazebag Jon Bernthal, sexy Eiza González and bearded and scary Jon Hamm. There’s so much here that works: the dialogue is witty and funny. The songs are perfectly chosen and set perfectly in time to the action. There’s even a sweet romance between Baby and a diner waitress (Lily James).

It’s got skillfully blocked chase scenes that look nothing like what the Fast and Furious movies do. And while practically every other movie is shot in Georgia these days, Baby Driver finds a way to film Atlanta in a new and interesting way. It probably helps that it's not trying to present itself as another location.

Baby Driver is Wright's first film since The World's End four years ago, although he was slated to direct Marvel's Ant-Man before leaving shortly prior to production. The new film is easily his best—just as ambitious as his 2010 Scott Pilgrim vs. The World, but with a much higher rate of success. Wright is writing alone this time—the Cornetto trilogy films, starting with Shaun of the Dead, were all co-written with Simon Pegg—and the transition is seamless. This is one of the year's most confident films.

Elgort, best known for The Fault in Our Stars, plays the lead part just right, as a soft-spoken guy with a Southern accent who may be an autistic savant. Spacey, as with most of his roles, is luxuriously overacting. But perhaps the best news about the cast is that it’s finally a great movie role for Jon Hamm, who I’ve long maintained has nothing stopping him from having George Clooney’s career.

The only real flaws in the film? One character's squeamishness about violence is a huge part of the plot until, all of a sudden and without explanation, it isn't. And the film's endgame has just one or two more beats than it needs to have.

Baby Driver may not be the best movie of the year, but it’s the movie this year that put the biggest smile on my face.