Slumdog Millionaire subjects its young characters to unspeakable atrocities and then has the presumption to peddle an “uplifting” message. Anyone interested in real emotions will await The Wrestler. 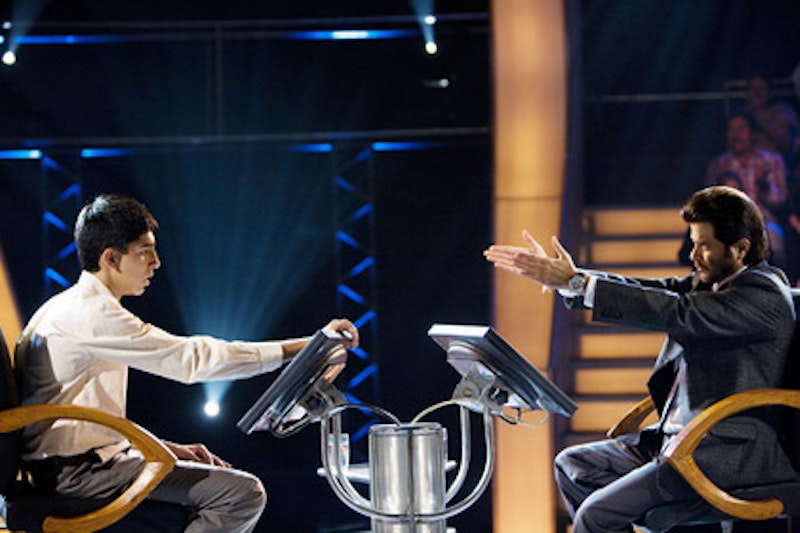 Prior to becoming a full-time film writer for this site, I used to think that the greatest sin a filmmaker could commit was aesthetic or intellectual incompetence. My stock “Worst Movie I’ve Ever Seen in Theaters” was, for a long time, the 2001 Rob Schneider vehicle The Animal, which I saw one weekend afternoon with my entire family. The Animal is exactly what you’d expect from a second rate Schneider showcase: bad direction, a cardboard romantic interest (Colleen Haskell, in her first acting job after winning Survivor), and a hackneyed script. The whole movie feels like it was shot by high schoolers on their AV club budget.

A movie like The Animal is bad simply because it wastes its audience’s time. Even Schneider’s fans (surely there are some) would rather watch the Deuce Bigelow movies if they’re in the mood for amateur-hour raunch. But this is a benign sort of cinematic failure—uninvolving even for fans and forgettable for those of us who’d rather look elsewhere. Far worse, as I’ve discovered from nearly a calendar year’s worth of critical movie-going, are the films that ruthlessly and cheaply exploit audience emotions for dramatic gain. By this I mean movies that are posited, either through artistic or marketing gestures, as emotionally substantive, but which resort to easy tragedy whenever possible in order to heighten viewer reactions.

2008 has been a particularly nasty year in this regard. 4 Weeks 3 Months and 2 Days used a graphic and aestheticized depiction of abortion to “illuminate” the horrors of Romanian communism. Frozen River depicted upstate New York poverty as an endless gray landscape of broken families and nihilistic misery, with an infant’s near-death thrown in for good measure just to ensure we’re on the edge of our seats.

These films, noxious and disreputable as they are, at least stick to one emotion in their unrelenting affronts on subtlety. 4 Weeks and Frozen River exist merely to barrage us with agony, to pound us into emotional submission using sadness as a hammer. There’s an old showbiz saw that says something like, “If you make your audience cry, then you’ve made a good movie.” But there are fair and unfair ways to make people cry, just as there are many ways to make a good movie that don’t involve crying at all, and the films I’ve mentioned were made by people who don’t seem to appreciate those caveats. I probably chuckled once or twice at The Animal, and someone may shed a tear at the blood and indignity on display in Frozen River, but movies don’t fail or succeed based on a quantified emotional measurements, especially when they elicit those emotions in brazenly calculated ways. Farts and dead babies, for example.

Slumdog Millionaire, the new film from UK director Danny Boyle, arrives late in the year and can therefore be seen as a victory march for this kind of filmmaking. Not content to merely bludgeon an audience with unremitting tragedy, Slumdog lowers us deep into the dramatic gutter and rubs our faces in its characters’ suffering, only to pull us all the way out in the final reel and provide a calculated “crowd-pleasing” finale. It’s therefore the juvenile cousin of Blindness, the Fernando Mereilles-directed debacle that similarly wallowed in a cinematic morass of rape and murder simply to makes its faux-hopeful ending seem uplifting.

Boyle’s film concerns Jamal Malik, a teenage Indian boy who, at the picture’s outset, is one question away from winning the 20-million rupee grand prize on his country’s version of Who Wants to Be a Millionaire. No contestant has ever gotten beyond 16,000 rupees, so a shadowy government operative has, we learn, been busy torturing Jamal to figure out how the uneducated, previously homeless boy cheated. But through the film’s admittedly effective three-layer narrative, we discover that Jamal does in fact know all the answers, and he knows them thanks to his unbelievably tragic, sub-Dickensian childhood.

Jamal’s life story is too episodic and complicated to recount here, nor does a plot summary have any bearing on the point I’m trying to make about Slumdog Millionaire. All you need to know is a few facts about what this boy, along with his brother and childhood love interest, endures throughout the film: His mother is brutally murdered before his eyes. He then lives as an orphan in downtown Mumbai, which is presented as a sprawling mountain of trash. A secretly evil child caregiver drugs and violently blinds his friend, also before Jamal’s eyes. The same evil caregiver enlists his love interest, Latika, as a dancer and presumably a sex slave. His brother grows into a street thug and steals Latika from under him, leaving Jamal without family or friends. And this is all after a truly disgusting scatological sequence early on that bests Boyle’s similar scene from Trainspotting in both duration and general filth.

All this tragedy and torture and pain is played for maximum dramatic effect—Boyle piles on the syrupy music, close-ups and slow motion shots, and frequently flashes back to the most heinous scenes—and as a continuing explanation for Jamal’s quiz show success. Every question, you see, just happens to correspond to a horrible memory from his life. Along the way, his romance with Latika grows and grows despite constant, violent interruption. When they are finally reunited (believe me, this is not a spoiler), we get even more treacly music and talk about destiny and true love. And then the credits roll over a joyous Bollywood-style dance sequence involving all the characters.

It’s not the happy ending of Slumdog Millionaire that bothers me; happy endings can be one of the great rewards of good art, movies or otherwise. Rather, it’s the cheapness of the ending—its reliance on the shocking and brutal events leading up to it—that makes the movie’s emotional payoff feel undeserved. Boyle and his screenwriter Simon Beaufoy seem uncertain of their ability to actually engage an audience’s emotions, so they bombard us with nightmarish images and sell them as tragedy. Then they finally reunite their protagonists at the film’s end and sell it as happiness. But every emotion in Slumdog Millionaire is broadcast at 10,000 decibels; the movie is a screaming neon cartoon of human experience, not an effective framing of hopelessness and redemption like the best inspirational movies—One Flew Over the Cuckoo’s Nest, The Landlord, The Grand Illusion, The Elephant Man, Sullivan’s Travels, Nights of Cabiria, or even It’s a Wonderful Life come to mind.

Slumdog’s champions will likely defend Boyle’s ghetto depictions by saying that this kind of violence actually happens in Mumbai, which isn’t germane; Boyle exploits poverty for his own craven storytelling concerns, and then he glamorizes it by playing party-time music like M.I.A.’s “Paper Planes” as the children gallivant through the slums. He glamorizes poverty by over-stylizing it and extolling the virtues of lessons learned through tough experience.

This is perhaps the “crowd-pleaser” that our current movie-going culture deserves. Having rewarded similarly exploitative pictures like Babel and Pan’s Labyrinth with praise and box office success, we’ve demeaned and desensitized ourselves to actual emotional engagement with the movies. How many more films can we possibly endure that rely on the routine torture of children for dramatic effect? Is this what it takes to make us recognize a plot as tragic? Worse still, is this what it takes to make us appreciate those children’s eventual happiness?

No point in dwelling on the flaws of Boyle’s film, since Slumdog is merely illustrative of our current conception of a “life-affirming” (to borrow a critic’s phrase that’s plastered on the poster), crowd-pleasing movie. But to affirm life, a movie must somehow evoke emotions that resemble those we actually feel, and this is not simply a matter of volume or scale. The Wrestler, which will be out soon in New York and L.A., is case in point. Simultaneously grim and warm, it offers an ending worthy of its complex and hopeful protagonist. I’ll be covering this movie when it’s released in December, and I’ll be glad to recognize a film that honors emotions rather than hurling them like blunt instruments at audiences that should demand better.