Where Are the Immigrants?

Gossip Girl epitomizes how inaccurately segregated the TV universe is. 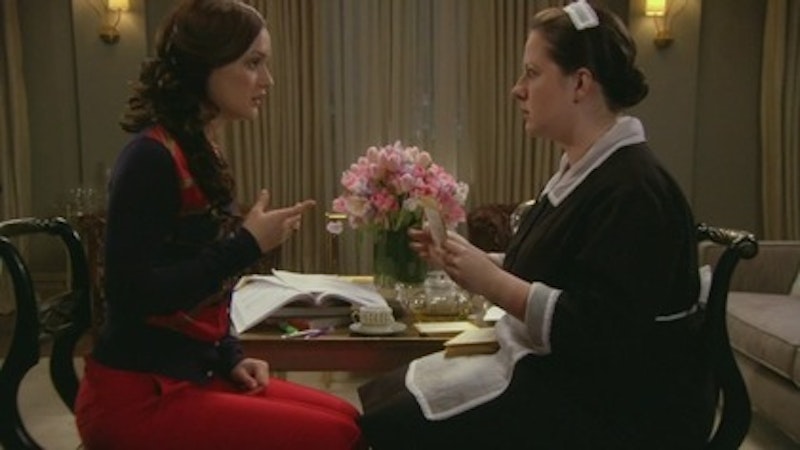 It’s time for TV screenwriters to refresh their view of the U.S. population.

No matter how alternative the soundtrack might be or how many guest appearances they get can get from 80s-era coke-snorting writers, they are going to look mighty out of touch. The biggest faux pas? Still believing that the ratio of immigrants in the United States somehow corresponds to the amount of super-rich families that have foreign maids, because that’s about the only place that they’re depicted.

This oversight has become glaringly obvious, as Gossip Girl has ballooned to proportions that eclipse the second generation of 90210. Gossip Girl doesn’t pretend to be progressive about depicting race; Blair and Serena’s elite group of uniform-subverting desirables at their high school contains a couple of non-white girls, but they’re so lemming-like and insignificant that they basically stand in as foils for how exciting and shiny the main characters are. But the show outdoes itself with its character Dorota, the ambiguously foreign maid.

Dorota fits all the stereotypes of immigrant maids that have been misused by soap operas for decades.  She wears nothing but trimmed black French maid outfits and her only lines are occasional expressions of moral distaste at the culture of the characters. Dorota’s own background is insignificant to her function on the show, and is never mentioned except for lines like “God is always watching,” which some might interpret as a hint that she’s Catholic. The actress herself is from Poland, but grew up in the States, hence the accent that doesn’t venture far from simply rolling every “r.”

The worst thing about depicting immigrants as maids is that they’re clearly peripheral to the events in the show, as well as silently submissive to the constant orders of the upper-class families they work for. Blair frequently calls Dorota names like “Silly Dorota!” and yells at her about choosing the wrong china. Like a good foreign stereotype, Dorota remains quiet and respectful to the rich white girl. Luckily for CW-devotees everywhere, Gossip Girl is not on a soap opera-level of cultural cluelessness. The show occasionally pokes fun at their stereotype, making Dorota’s ringtone for the Waldorfs is “I’m a Slave 4U” by Britney Spears.

The archetypal immigrant maid character may have begun to expire after the movie Spanglish, which explores the power relationship between the stereotypical backyard pool-bronzed American family and the strapped-for-cash Mexican maid. Spanglish reversed the direction of the lens and showed the story from the perspective of the saucy Flor, who rarely hesitated to spar a bit with the super skinny wife of the house, played by Téa Leoni.

Evidence of this depiction’s recent staleness is the Internet buzz surrounding Dorota’s recent development into a slightly more prominent mother figure for Blair, making the shaky parameters of her character start to cave. On a recap of the Thanksgiving episode, a writer for Gawker summarizes, “So she [Blair] dragged dutiful Dorota around town when all poor Dorota wanted to do was go feed the ducks,” adding mockingly, “She understands simple pleasures.” Tim Stack from Entertainment Weekly’s website takes joy in laughing at Dorota’s tacky depiction, writing, “I just love the idea of Blair and Dorota roaming the Upper East Side together like gypsies. How cute, especially since Dorota was wearing her little maid's cap!” Fans love to gossip about Dorota because her character is so badly written that it’s fun, but does the regal successor of The O.C. really want to be the butt of a blogosphere’s joke?

When it comes to demographic disasters, Gossip Girl is not alone in the blame. There are an estimated 38 million immigrants in the States, yet many shows set in high-diversity cities like New York and L.A. have nary a character with a legitimate accent. Any problem has been going on too long when there are already satires of it, and the lack of non-stereotyped immigrants on TV has gotten plenty of slack from the comedy world. There’s the hyperbolized examples of Apu on The Simpsons and Fez on That 70s Show, whose peripheral roles remind us just how unfamiliar the idea about a show featuring an entire family of immigrants has remained.

Someone’s got to clean up that mess, and it won’t be the maid.