So You Found Yourself in a Saw Trap… 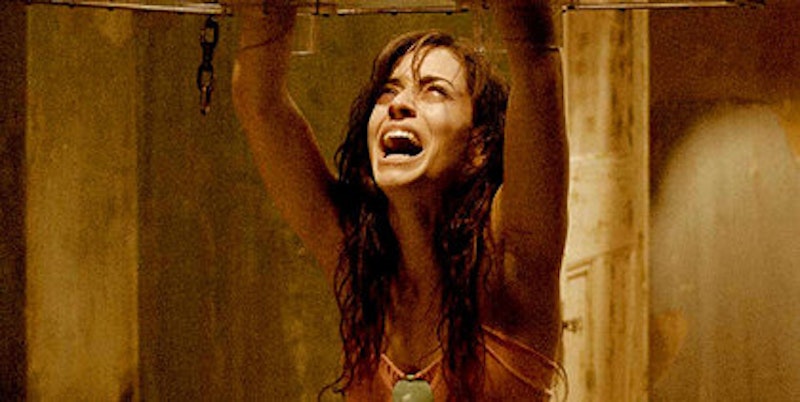 Hi, I’m Phil Medley, and I’m going to guide you through what to do should you wake up inside a Saw trap. Every year, roughly five-10 people find themselves stuck in a Saw trap, and I regret to say that most do not survive. But that’s because they didn’t have my patented four-step program! With this simple tutorial, I can promise you that if you end up in a Saw trap, you definitely might possibly live to see another day.

Step 1:  Try Not to Get Kidnapped

In fairness, this instruction is a little misplaced in a guide to surviving a Saw trap, but clearly, avoiding capture altogether is the most ideal solution. Here are some helpful hints about how not to get kidnapped by the Jigsaw Killer:

—Always lock your doors when leaving your dwelling or your car.
—Don’t approve deliveries or service calls for which you did not personally arrange.
—Try to avoid dark recesses large enough for someone to hide in.
—Don’t wrong anyone or consistently make enemies with the general population.

Note: The remaining steps assume that the Jigsaw Killer has indeed captured you.

Uh oh, looks like you’ve been captured and placed inside a game of life and death. ?  Now what? Well, your first instinct is probably going to be to panic. Resist this urge. Panicking does nothing but cloud the mind and disrupt your decision-making abilities. Also, sudden movements will most likely trigger some sort of countdown device, and you want to put that off for as long as you can. Just take deep breaths to slow your heart rate down. If that doesn’t work, try humming a song. I recommend “Semi-Charmed Life” by Third Eye Blind.

Step 3:  Keep an Open Eye and an Open Mind

Here’s your chance to do some sleuthing, gumshoes! Before you listen to the tape recording that Jigsaw has left for you, scope out your surroundings. Does anything look out-of-the-ordinary? If so, take note of it—it could be a key to your escape.

Also, it couldn’t hurt to do a little introspection: Why do you think you’ve been placed in a Saw trap? Did you commit a crime but weren’t caught? Perhaps you have an unsavory or socially unacceptable occupation. Whatever the reason, it would behoove you to gather as much information about your situation as you can before listening to the tape recording. Collecting this information puts you ahead of the game, and it makes Jigsaw a little less puzzling.

One last note on keeping an open mind: You’re going to need to prepare yourself for the prospect of losing a limb, or at the very least, an appendage. I know, I know—it’s a tough pill to swallow, but after all, Jigsaw wouldn’t be a horrifying menace to society if all of his victims walked away free, now would he? But take solace in the knowledge that breakthroughs in medicine and technology have helped numerous limbless individuals live nearly limbed lives.

Step 4:  Always Remember—Jigsaw is on your side

I’ve been all over the country, and I gotta say that this is the step on which I get the most pushback. At my seminars, people say things like “What are you talking about? Jigsaw is a killer!” and “He’s a maniac!” Yes, he may be all those things and more, but do you know what Jigsaw isn’t? A liar. He may have put you in this predicament, but he wants to see you pull through and live a full life! If he gives you an instruction that sounds crazy and/or potentially dangerous, DO IT. If he tells you to put your head into a guillotine, put your head confidently into that guillotine—it probably opens up a locked door somewhere. In all my years of doing this dog and pony show, I have never once heard of Jigsaw telling somebody to do something and it turning out to be the wrong thing to do.

All right, let’s review TRKA: (1) Try really hard not to get kidnapped; (2) Remain as calm as you can; (3) Keep an open eye and more importantly an open mind; and (4) Always remember that Jigsaw is on your side. It’s easy to remember if you use this helpful mnemonic: The Regal King Accommodates [Guests].

Oh, and don’t forget—it’s a game, so try to have a little fun, will ya!