4 Months, 3 Weeks and 2 Days goes where Hollywood dares not tread, but there’s still something unsettling about its brand of “realism.” 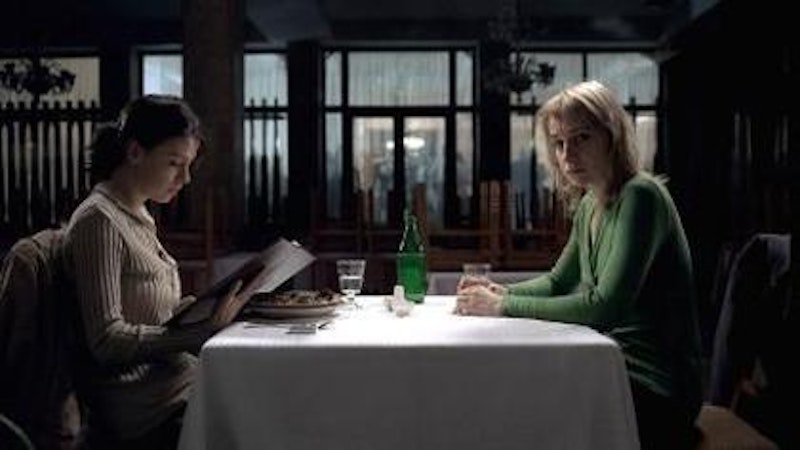 It’s inevitable that a film with a cumbersome title and intimidating subject matter will be referred to in shorthand. Thus, despite a Palme d’Or title and a recent avalanche of  U.S. critical acclaim, Christian Mungiu’s second feature 4 Months, 3 Weeks and 2 Days has already been dubbed by many as “the Romanian abortion movie.” It’s a reductive label but not an inaccurate one, and it at least acknowledges that Mungiu is in an entirely different artistic realm than, say, Jason Reitman and Diablo Cody, the blandness incarnate creative team behind Juno. As for other recent possible analogues, Mungiu’s concerns are barely even comparable to Judd “Shmushmortion” Apatow’s cowardly non-mention of the issue in Knocked Up.

On the surface, Mungiu’s tense, grainy film makes the recent pair of pregnancy-issue Hollywood movies look like Disney romps. He bypasses the will-she-or-won’t-she drama and instead plunges viewers into the societal reality of abortion—it isn’t pretty, but it happens. It’s never a happy choice, but occasionally a necessary one. Here’s hoping this cinematic attitude catches on, in these times when pap like Juno is praised for its honesty.

But as unflinching as 4 Months is, it still walks the same delicate line as any “issue” movie. This film’s advocates will argue fiercely that it’s not “about” abortion, that it is more generally an examination of life under a totalitarian regime, in this case Romania during the reign of dictator Nicolai Ceausescu. Gabita, the young student who wants to end her pregnancy, and Otilia, the friend who tries to help her, are subjected to more than just the emotional trauma that accompanies the act in question; they also have to navigate the attending sense of societal shame and the possibility of imprisonment if caught. In the film’s most agonizing sequence, the abortion doctor (with the eyebrow-raising name Dr. Bebe) requests sex in addition to monetary payment, exploiting both their desperation and the knowledge that he won’t be reported. Even in the scenes that don’t directly concern the girls’ ordeal, the country’s oppressive regime looms over everything—the routine bribery during any commercial transaction, political conversations at dinner or the drab concrete architecture that makes all the exterior shots indistinguishable.

So no, 4 Months isn’t “about” abortion, just like Moby Dick isn’t “about” whaling. But Melville’s book still has a lot about catching whales, and you can’t talk about Mungiu’s film for long without mentioning the fetus that eventually ends up on a hotel bathroom floor. Mungiu could have made any number of movies about his country’s communist past, but he chose to view the regime through this particular experience. He’s not required to explain this choice (although he has, stating that it’s based on the real-life experience of a friend) but he does need to justify it in his work. Instead, the abortion exists in the film merely to ratchet up the viewer’s psychological and physical discomfort—hardly a noble depiction of such a traumatic decision. In its own way, the abortion in 4 Months, 3 Weeks and 2 Days is as much a simple plot device as the same act’s non-existence in Knocked Up.

Technically, Gabita’s abortion is the plot of Mungiu’s film. His most inspired artistic choice is making Otilia, not Gabita, the center of the story. After all, Gabita spends most of the film supine, waiting for her pregnancy to terminate. Otilia, meanwhile, is forced to compensate for her friend’s timidity; she goes to meet the doctor, brings him back to the hotel room she rented, and stoically attends a family gathering at her boyfriend’s apartment, barely hiding the tremendous suffering and nervousness brought on by the day’s events.

As Otilia, Anamaria Marinca gives a compelling performance that we see through long, unbroken shots. She’s in every scene of the film, and the camera focuses on her so closely that the audience encounters each obstacle simultaneously with her. This documentary style, along with the countdown implied in the film’s title, give this very interior story the appearance of a thriller. Otilia’s eyes are constantly darting, the hand-held camera bounces as its operator runs around her, and of course the opening title—“Romania, 1987”—reminds us that the specter of communism haunts every ensuing frame.

It’s appropriate, then, that the domestic (read: non-abortion) scenes in 4 Months are the ones that most effectively illuminate the extent to which totalitarianism imbued the lives of most Romanians. In her first, unsuccessful attempt to get a hotel room, Otilia is bludgeoned by that particular brand of professional insouciance that grows in a society without commercial competition. Any other product she buys comes from the black market. And as she comes and goes from the hotel—first to attend her boyfriend’s family party, then later to dispose of the fetus—she’s held up by the prying eyes of identity-card inspectors. The suspense of the story derives from Mungiu’s aesthetic depiction, and also from the recognition that Otilia could be arrested at any moment.

But abortion, of course, was only one of many illegal “anti-communist” activities under Ceausescu. The dictator also rationed food, gasoline, and electricity, performed horrible medical experiments on orphans, destroyed innumerable historical buildings and artworks, and bugged civilian phones. If Mungiu wanted to make a film about totalitarianism, he had countless domestic and political issues through which to frame his story. One would then suspect that his choice to focus on abortion grew out of a personal view on the subject, especially when a similar film could be made about any number of less sensational acts. Teaching Western literature, for example, or even buying bread. Then again, nobody would be recoiling in suspense during a film about bread lines.

Mungiu carefully avoids making any statements about abortion, however. We never learn the reason that Gabita wants one or even the circumstances of her pregnancy. The invasive, painful procedure isn’t presented as a metaphor for the regime’s stranglehold. And Mungiu presents all the medical details—the syringes, the instructions to “lie perfectly still,” the possibility of fatal hemorrhaging—in such a way as to intimately acquaint the audience with the procedure’s awfulness. His commitment to realism is admirable, but I also think that Mungiu exploits the strong emotions and discomfort that abortion tends to rightfully raise in people as a way to heighten his film’s suspense. Luckily for him, the issue simultaneously makes 4 Months seem topically weightier than it actually is, leading to exaggerated praise like that from critic Ann Hornaday, who called the film “shocking and courageous.”

Those two words mean different things, however, and one doesn’t necessarily imply the other. It’s absurd to applaud Mungiu’s courage just because he shows the terrible physical reality of abortion on film; by that standard, any picketing pro-lifer with a camera should be invited to Cannes. We can admire the artful tension of 4 Months, 3 Weeks and 2 Days without misinterpreting its horror as gravitas. If a director constructs a film around a graphic portrayal of one of the most controversial issues in modern times, then any serious conversation about the film has to address the purpose of his depiction. In 4 Months, the abortion exists solely to induce further squeamishness, and it’s surprising that the accolades have rolled in without any acknowledgment whatsoever of Mungiu’s dubious treatment of the subject.

Despite superficial similarities to Juno and Knocked Up, the Hollywood product that Mungiu’s film most closely resembles is Alfonso Cuarón’s Children of Men. In its hand-held, dystopian vision of a woman trying to terminate a child, 4 Months is the inverse of Cuarón’s film, in which Clive Owen tried to keep the world’s only infant alive. And just as many critics awkwardly tried to saddle Children of Men with post-9/11 relevance, 4 Months doesn’t function well as a metaphor for anything. The former is about terrorism and the latter about abortion, but both simply use those topics as entry points for cinematic tension. Mungiu has brought the full visceral nature of abortion closer to the artistic mainstream, but his film didn’t need that particular issue to make its point. Instead, Mungiu comes off more like Dr. Bebe than he’d probably like to admit—providing a necessary service, but not without exploitation.