A director who snickered about death. 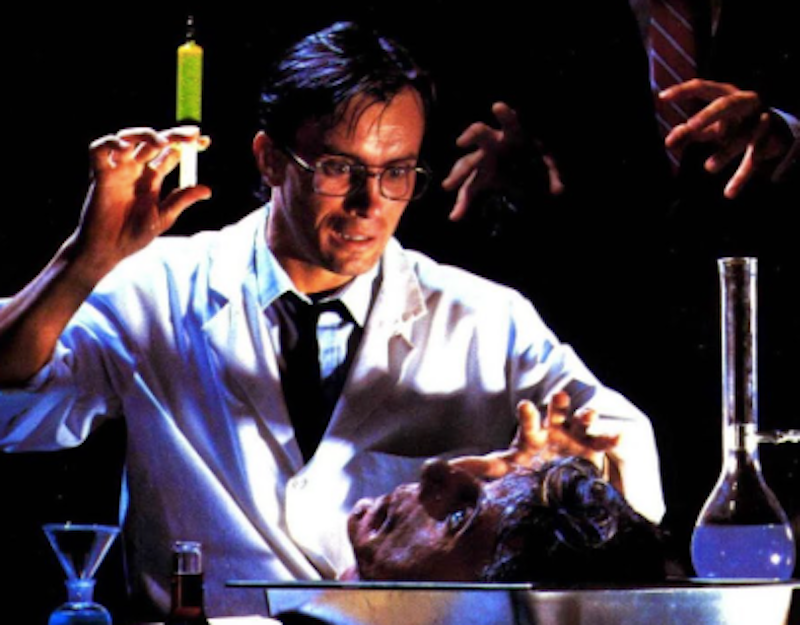 Body horror films are supposed to be horrible. The alien comes tearing out of the stomach; the arctic researchers dissolve in a vile ichor; everyone on screen twists and warps in a pulpy mass of blood and flesh and wrongness. The human body is disgusting and repellent. Watching body horror makes you sick of yourself.

Beneath the genres's oozing, writhing ugliness, though, there lurks another fetid emotion—joy. Turning bodies into puddles isn't just nauseating. It's also fun.

No one captured the sick exhilaration of the genre better than director Stuart Gordon, who died last week. Gordon's 1985 Re-Animator, based loosely on an H.P. Lovecraft story, is a mad scientist riff that replaces Mary Shelly's melodramatic angst with giddy gore. Rarely has the grotesque looked like so much fun.

The movie is set at Miskatonic University, where the intense, bespectacled Herbert West (Jeffrey Combs) comes to complete his studies after his mentor died messily in Switzerland. West takes a room with fellow medical student Dan Cain (Bruce Abbott), who soon discovers that his roommate is obsessed with reanimating the dead. An experiment in the morgue goes awry, resulting in the death of the medical school director Dean Halsey (Robert Sampson), who’s then reanimated himself, an experiment which goes awry, resulting in… well, you get the idea. Catastrophe follows catastrophe, and the solution is always more reanimation. Expiration and resurrection dance around each other in a pitched polka of panic and putrescence, set to the music of Richard Band's brilliant score, which features a Psycho-like sawing motif given a grinning, jaunty oomph. Every time West pushes the plunger down on the needle with his neon-green reagent, the background music sounds like a party with teeth.

Combs as West is virtually a party himself. Though Herbert initially seems like a typical buttoned up, logical scientist, his protestations about scientific inquiry and the pursuit of knowledge are quickly revealed to be a mere façade. The truth is that he just really loves reanimation. He breaks into a goofy smile at inopportune moments as the chaos unfolds, and pulls out his formula and injects it whenever he can, even at risk to his own life and health. After pompous brain surgeon Carl Hill (David Gale) tries to steal the reanimating research, West beats him to death and then decapitates him with a shovel. As soon as the man is dead, though, West shifts from self-protection back to his passionate hobby. Looking from Hill's head to his body, he exclaims. "I've never done whole parts before!" and injects both bits.

Inevitably, Hill comes back to life. His body knocks West out, and then carries his head away to perform various evils—including kidnapping Cain's girlfriend Megan Halsey (Barbara Crampton) and imprisoning her in the morgue. The disembodied Hill rolls his eyes and gasps and rasps in a tray of blood as he looks at Megan's nude form. Then his body picks up his head and lowers the head towards her as its tongue sticks out ghoulishly.

Decapitated, Hill seems to be having more fun than ever before. Reduced to head and eyes, he's a stand-in for the viewer, sighing happily as blood is poured over him and exuberantly running his eyes not only over Meg, but over the other horrors—his own body stumbling around as it seeks others to strangle, all the zombies he's reanimated as they groan and ooze and attack. "That's it, my dear, more passion!" he hacks out as Meg screams and tries to escape. Repulsion and enthusiasm are sexualized and then queasily conflated.

Part of the enthusiasm is for the possibilities of filmmaking and special effects. West and Hill love the spectacle of on screen gore as much as the audience does. Makeup artist John Naulin says he used 24 gallons of blood on the film; he'd never used more than two on any other project. A lot of what fans love about body horror is the shocking extremity—the unabashed gruesome spectacle. Reanimator revels in eyes popping out, or eviscerated cats coming back to unwholesome life. The scene in which a reanimated corpse kills Dean Halsey is an orgy of excess; first the zombie bashes a door over onto the Dean, then leaps up and down on the door while you hear the Dean's bones crunching underneath it, then it pulls the Dean out and starts beating and strangling him. It goes on, as Dan and West try to pry him off.

Beyond the spectacle, though, Reanimator is a celebration of the sheer yuckiness of the human condition. Death for Gordon isn't something to fear, but something to embrace because corpses are just so cool. Like Hill muttering with a mixture of exasperation and delight as he watches his body stumble around, Gordon loves the squishy dumb ugliness of our corporal meat. We die and worms eat our eyes and how is that not awesome? Who would exchange that for the life of the mind?

In the famous last scene of the film, Meg dies on a hospital table, and Dan grimly prepares a syringe-full of the reagent. "I love you," he whispers, as that Richard Band more-corpses-are-coming-back-to-life theme starts up. Then the screen fades to black, and only the glowing reagent is visible—disappearing as the plunger is depressed and it flows into Meg's brain, which we can't see. There's a pause, and then Crampton as Meg earns her scream queen bona fides as she unleashes an unholy shriek in the blackness.

And that's the end. I hope Stuart Gordon is screaming too now, somewhere, filled with the neon stink of mortality that he loved.