Death Comes Faster Than You Think

On Max von Sydow's fantastic performance in The Ultimate Warrior (1975), an otherwise forgettable film now streaming on the Criterion Channel. 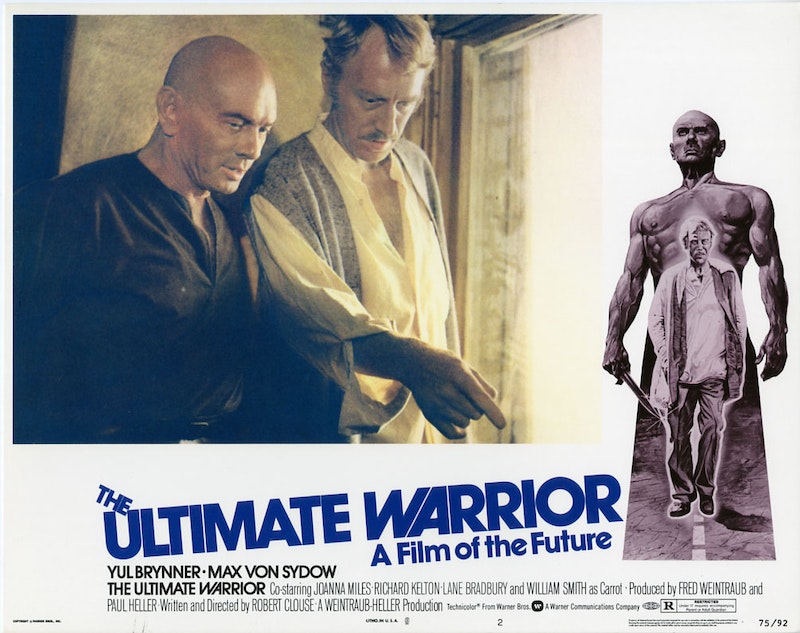 Max von Sydow died on March 8. He was a powerful film presence, at home in Ingmar Bergman classics like The Seventh Seal and The Magician as well as Hollywood films like The Exorcist and Minority Report. He also had roles, large or small, in genre films that weren’t always so distinguished. Flash Gordon, for example. Conan the Barbarian. Ghostbusters II. Solomon Kane. Even late in life he took minor parts in The Force Awakens and Game of Thrones.

One of von Sydow’s movies ended up in the collection of science-fiction films from the 1970s that the Criterion Channel streamed in January. The Ultimate Warrior, from 1975, was probably the least interesting of all Criterion’s picks. It’s forgettable. Except for von Sydow’s performance.

Written and directed by Robert Clouse (director of Enter the Dragon and Black Belt Jones), the movie’s set in a nearly abandoned New York City in 2012, when the twin towers of the World Trade Center overshadow empty streets. A plague has killed much of the population and wiped out crops. Two enclaves exist in fortified compounds in New York; one, led by Baron (von Sydow) has a gardener named Cal (Richard Kelton) who’s worked out how to grow plague-resistant food in unfertile earth.

Unfortunately, the other and larger enclave has a belligerent leader named Carrot (William Smith). But Baron’s group lucks into potential salvation: a mysterious warrior named Carson (Yul Brynner) who Baron hires to protect his people. The two men hatch plans for the warrior to take Cal, Cal’s seeds, and Baron’s daughter Melinda to an island in the south where civilization can be rebuilt.

Of course the plans don’t go as Baron and Carson would like, and the result is a pedestrian action-adventure movie without much action or adventure until the third act. Tension doesn’t build, subplots are mechanical, and there’s a general feeling of predictability. You’ve seen all this before, in better movies.

Video rental stores hadn’t been invented when this film was released, but it has the feel of a direct-to-video movie of the kind that would become common in only a few years. Cheap costumes, cheap sets, unimaginative choreography, a post-apocalypse setting to keep the budget down, and good actors on the back ends of their careers.

Except von Sydow wasn’t, really; this was only two years after The Exorcist. I’ve no idea why he took a part in this movie, but with all respect to Brynner, he’s the most interesting actor in it. There’s almost always a kind of lupine quality to von Sydow, a sense of danger. And at the same time a sense of intelligence and of emotional depth. I’ve never seen a movie in which he didn’t give a performance at least as strong and as subtle as the movie merited, and The Ultimate Warrior is no exception.

Baron’s not a particularly interesting character. He’s archetypal: the wise leader of a (relatively) peaceful people struggling to survive in a brutal world. It’s the kind of part that usually exists to provide a mentor for the hero the story’s really about. That’s not the case here. To an extent, that’s a function of a surprising casting decision: Brynner was nine years older than von Sydow. Fifty-five when the movie was shot, Brynner should’ve been too old to play a credible warrior, and it’s a testament to his own acting skill as well as his physical fitness that he never feels too terribly miscast.

But von Sydow plays Baron in a way you don’t expect in a story like this. He doesn’t come off as especially wise, more a practical man who works out schemes to defend his people and his family. There’s a vitality to him.

Usually it’s the hero, in this case Brynner’s Carson, who gets all the vitality, all the capability and agency. It’s the hero who gets to do whatever needs to be done. But von Sydow plays Baron in a different way. You’re not sure of him. Is he setting up Carson? What’s on his mind? It turns out to be a scheme to save his daughter. But von Sydow makes us wonder what kind of man makes that kind of scheme. What kind of man pulls together a community after the apocalypse happens?

It’s a portrayal that fits perfectly with the role as written, but by taking the character seriously and finding an original way to play him, von Sydow gives the story a new dimension. And it’s one of the few things in the movie that’s not what you expect; one of the few things that gives you more than the standard.

The most interesting scenes in the movie are Baron’s conversations with Carson. Von Sydow and Brynner don’t have chemistry, if only because Brynner plays Carson as tight-lipped and emotionally closed, maintaining a poker face. Von Sydow therefore plays their mundane scenes together as a feeling-out process, a man trying to take the measure of another man. The two actors, both talented old pros, make something moderately interesting out of lines that don’t give them much to work with.

It’s a problem for The Ultimate Warrior, which is nominally an action movie, that the action’s not as interesting as one of the performances by a supporting actor. But that’s the way it is. After Baron’s inevitable death, there’s a sense of anticlimax even as the action aspect picks up; nothing surprising happens, except that the script and staging forces Carson into an improbable act of self-sacrifice at the very end.

And there’s only so much either actor can do with the parts they have to play. There isn’t enough von Sydow in the film to make it worth watching for him alone, and ultimately his character’s lacking at a script level. This isn’t the kind of movie that’s a career highlight. But it stands as a testament to von Sydow’s professionalism and skill. His work here is an example of what talent can do to make a pedestrian movie watchable.