The truth about coastal elites. 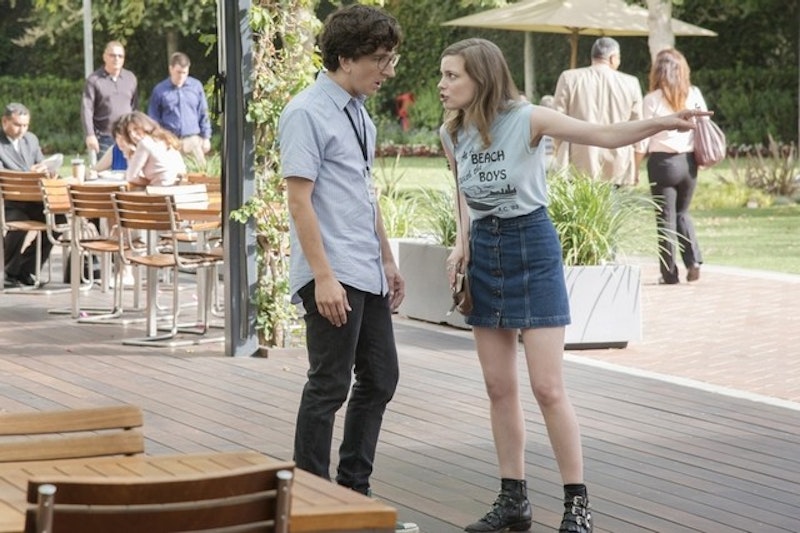 I hated Love. I didn't find it funny. I found most of the characters completely unappealing both physically and emotionally. With the end of the very first scene, I thought, “How'd this get made?” The answer of course is due to the will of Hollywood's go-to comedy godfather, Judd Apatow, the brains behind everything from Freaks and Geeks to my favorite comedy of the last several years Bridesmaids.

Apatow's work can be an exhausting exercise in banality when it's off. Take, for example, This is 40, whose advertising not only alluded to the fact that the creators weren't too confident in the film with taglines like “The sort-of sequel to 'Knocked-Up,'” but also that one of the main images from its marketing was that of lead actress Leslie Mann, hair wrapped up in towel, giving us the “can't even” look. And as box office stats showed, the audience couldn't even either.

Back to Love. Despite my bafflement as to how the show got made and disgust with its main ingredients, I plowed on. I'm not sure why. With the pedigree of Apatow behind it, I kept thinking, “Any minute, this is gonna get good.” It didn't. It got worse.

First scene, two couples in two apartments, one in bed reading, the other figuring out whether they want to have sex. In both cases, the men were significantly less attractive than the women. Not like one-or-two-nose-hairs less attractive. Like “Wait, these women have sex with these men ever without being significantly financially compensated first?” less attractive. One guy was fat and bald, and the other, Gus (played by Paul Rust, the creator of the show), kept my brain stimulated with visions of punching his face. So already as a viewer I was annoyed because hot women having sex with these gag-inducing men never happens in real life. Ever. I get it, it’s made-up and a “comedy,” but belief suspension only stretches so far.

Next few scenes make me want to punch Gus until he bleeds. They’re of him whining about getting dumped, whining about being in his 30s, whining about his whiny ass. Then we get to the coffee-with-friends scene. For the uninitiated, the c-w-f is a well-worn staple of (indie) comedies wherein the main character whines to friends about whatever the theme is. Over coffee. But that’s not the worst part. Not even close.

Gus starts in on where he’s going to live, now that he and his girlfriend are broken up. A plausible problem for a character, I grant. Also, not a bad problem upon which to build a comedy scene. But he, and the other characters, go into detail about various LA neighborhoods and which he can afford, would want to live in, etc. I’ve lived in LA for about 20 years. Even I don’t know as much about LA neighborhoods as these characters do. More importantly, I don’t care. As a resident or viewer.

So now to the Trump part! Months ago, I became acquainted with the phrase “coastal elites.” A derogatory term used by predominantly Trump supporters against a somewhat clichéd caricature of those of us who live in LA, NYC, and Portland. I find the term somewhat condescending. Not just because I happen to live in LA, was raised in Portland, and have spent some time in NYC, but also because the term carries with it a connotation of down-the-nose sneering at anyone who lives in those places based on the presumption that we think we’re better than everyone else. There’s some anecdotal truth to that presumption, but only some. While I lean left, tend to eat vegan, am an atheist, and voted for Obama twice, I do my best to keep my biases at bay, not dismiss others, and generally treat other adults like adults. That said, I understand the term. There’s an air (apart from the smog) in LA of moral righteousness. There are rich people here. Some of the richest in the world. And when those morally righteous rich people get to talking about morally righteous rich people things, it does make you wanna suck on a shotgun.

Back to the c-w-f scene, the above paragraph is exactly what came across in the conversation about where Gus will live. He and his friends are “coastal elites” and you want to smack them. But it’s worse than that. Not only do they go on about the horrors of the “East Side” and how “Santa Monica’s really expensive,” but they’re also doing it in one of the most expensive, hippest, vegan-est, trendiest, “could we possibly be more of an LA elitist cliche”-est joints in all of LA county (the biggest in California), Brite Spot. And it’s exactly what you think. Retro-chic fonts and wood paneling, a tofu- and kale-laden menu. It’s not only boring and not funny, but it’s entirely dependent on local cultural reference that no one outside of Gus’ (and by extension Rust’s) circles knows let alone cares about.

Similarly, in a scene near the end of the episode, the bald, fat on-again-off-again boyfriend convinces the female lead to go a group that “isn’t church.” It’s a group of mostly thirtysomethings who gather in a small auditorium where they talk about love and energy. If this sounds remotely familiar, it’s because it’s a poorly veiled satire of L. Ron Hubbard’s Scientology. If you’re not familiar with Scientology, that’s because you’re not an LA “coastal elite” and you don’t care about Scientology. All you really need to know about the religion is that it’s kooky, weird, and caters predominantly to insanely rich actors like Tom Cruise. Why this is important is that, for some reason, Rust must’ve found it necessary to include and lampoon Scientology.

Let’s take stock. Love is basically about an ugly, boring Gus who’s preoccupied with ugly, boring LA-based things that only those who are either from LA or who have lived here a really long time can appreciate. Most people don’t know or care about the East Side versus the West Side. Most people can’t possibly afford to hang out at Brite Spot, let alone whine about their housing situation while eating kale salads. Most people have no clue what actor-obsessed Scientology is, let alone have any time or energy to care about who attends or why. Not only is “Love” based on gags exclusive to anyone who isn’t native to or a long-term resident of LA, but it also hinges on mockery of LA-specific characteristics being funny to those who don’t live here.

We’ve arrived at the scene that sealed Love’s fate. And it wasn’t that this scene revealed any one “coastal elite”-y thing more than any other. The disgust it ignited in me was so much more basic. So first some set-up. Gus is at a pool party with some cooler twentysomethings. He’s drinking and joking with them. He’s having the time of his life (presumably because he’s never been to a pool party before). As the party winds down, he heads out. Two cute girls approach him. Not that he works up the courage to approach two cute girls. They actually waste their time approaching him. Immediately, I was tossed out of the “reality” of this show. From what we already know of Gus, how awkward, nervous, and unattractive he is, it’s completely implausible that this would happen. They ask him what he’s up to. He gives some completely unremarkable answer. They ask him to come up to their room. We cut to him in their room.

There’s some boring back and forth that we know is leading to what happens next. They offer him a three-way. At this point, I laughed. Not because it was so funny. Because it was off-the-rocker ridiculous. Much to my chagrin, Gus takes them up on it. And my eyeballs are tortured with the revolting sight of a shirtless Gus making out with the girls.

Remember that Gus’ actor Rust is not only the lead actor of this show, but also the creator and writer. He intentionally inflicted a shirt-off him onto the audience coupled with his wet-dream fantasy of having a three-way with hot twentysomethings. Look, I don’t begrudge an ugly man’s fantasies. I begrudge him inflicting them on me. But even that wasn’t the worst part. In the middle of making out, one of the girls admits that they’re sisters. Gus leaps out of bed in disgust.

Speaking on behalf of all heterosexual males, if two hot girls, with whom I’m engaging in a three-way, reveal to me that they’re sisters, my only reaction is, “Who’s first?” Not in moral-high-ground La La Land. Nope. Gus engages in a boring, unfunny freak-out about how disgusting it is that these two sisters are sisters and so he can’t have sex with them. They react correctly, offended that he’d turn them down, and toss him out.