Burden is a flawed effort with some significant virtues. C 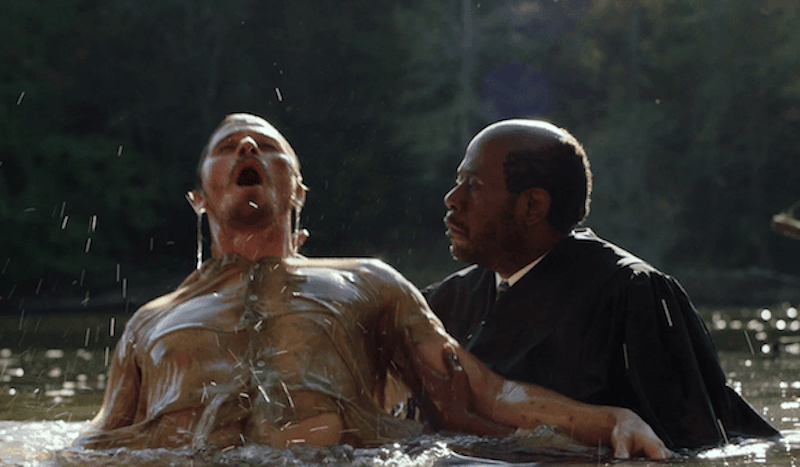 America can't get enough of stories in which racist white people gain redemption and see the error of their ways, through their friendship with a black person. One such story—Green Book—won the Best Picture Oscar for 2018. Burden, the latest entrant in this peculiar subgenre, is better than Green Book, and not nearly as insulting. No one eats a large pizza in bed or forces another character to eat fried chicken in a moving car, and the filmmakers appear to have checked in with the person who was basis for the main African-American character to make sure he had a family. But Burden is a flawed effort that, despite some significant virtues, can't sell the redemption story at its heart.

The film, directed by Andrew Heckler and based on a true story, gets its title from both the burden of racial prejudice, and that… the guy's name was Mike Burden. In a depressed small South Carolina town in 1996, Burden (Garrett Hedlund) is a local ne'er-do-well who belongs to the town's Klan chapter, which is led by Tom Griffin (a woefully miscast Tom Wilkinson, who can't quite nail the accent.)

The Klansmen have recently opened a museum in an old theater that features Klan and Confederate memorabilia, which is resisted by the local reverend (Forest Whitaker) and the rest of the black community. The cops, meanwhile, are firmly aligned with the Klan, which also maintains the power to blacklist people from local employment. Burden is loyal to the Klan, seeing Griffin as a father figure, and even participates in some horrific violence. But things begin to change when he starts dating the single mother (Andrea Riseborough) of a young son and eventually, after breaking with the Klan, he's taken in by Whitaker's minister.

Burden’s affecting at times and the filmmakers do a good job creating the world of the town. The film also, much like Spike Lee's BlacKKKlansman two years ago, hammers home the point that members of the Ku Klux Klan are, objectively speaking, the stupidest people in the world. The problem is Burden can't quite nail what’s most important—convincingly selling the main's character's radical transformation.

The reason for Burden's redemption is… what? Growth? Guilt? Sudden conscience? Pressure from his anti-racist girlfriend? Newfound religion? The film hints at all of the above, but never articulates the main reason, and neither the script nor Hedlund is up to conveying the change.

Whereas Viggo Mortensen's Green Book character was a loud, motor-mouthed dumbass, Burden is a monosyllabic, uncharismatic, boring dumbass. Sometimes quiet performances can convey gravitas at the margin, but not here. Whitaker gives a decent performance, even if his haircut looks a bit ridiculous, while Usher has a small but affecting supporting role as a childhood friend of Burden's. Riseborough, meanwhile, continues her long streak of looking different in each one of her movie roles.

If you're looking for Trump-era salience, Burden was shot in October and November of 2016, was a Sundance entry in 2018, and is finally headed to theaters two years later, courtesy of fledgling distributor 101 Studios. The film also ends with a plea to donate so that the former Klan museum can be turned back into a theater, along with a URL. A noble cause, but it makes it feel like the movie was a GoFundMe pitch.