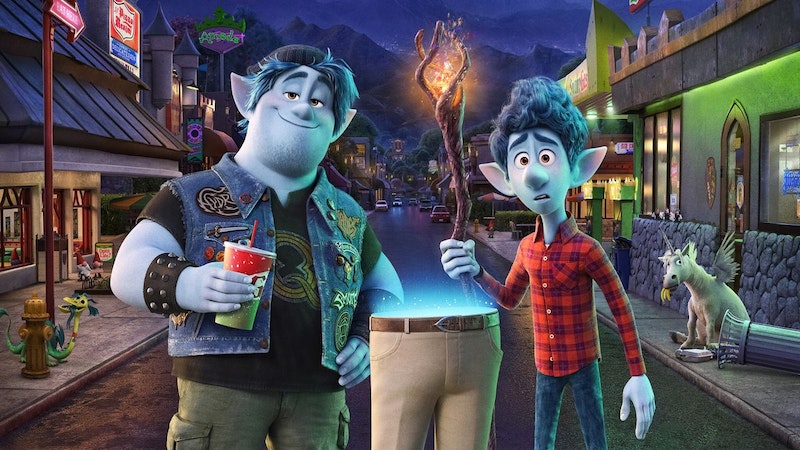 With Onward, Pixar Animation Studios has produced its best film since Coco three years ago, an original and emotional effort that succeeds equally at storytelling and world-building. It represents the best of what Pixar can do with a non-sequel original story.

Directed by Dan Scanlon, a veteran Pixar hand whose last film was the forgettable sequel Monsters University, Onward starts with a great premise, and then builds to a moment that's almost shocking in its profundity and beauty. In between, there's a lot of what Pixar does best: First-rate animation, witty dialogue, and wonderful characters. And much like corporate cousin Walt Disney Animation Studios did with Frozen, Onward subverts genre expectations to center a compelling sibling relationship.

The film, in its first masterstroke, is set in a suburban town in which magic and mythical creatures were a regular feature of daily life until relatively recently but have since been replaced by technology. There are, however, still various hints of the magical world of the past.

Ian and Barley (Tom Holland and Chris Pratt) are a pair of elf brothers, whose father passed away when Barley was young, and Ian wasn’t yet born. On Ian's 16th birthday, the nerdish Ian learns he can carry out a spell that will bring their father back from the dead for one more day—but the spell wears off halfway through, leaving only the lower half of their dad's body. With a false torso, the brothers carry him around, Weekend at Bernies-like, for the bulk of the film.

The rest of the film is a quest to complete the spell while, in traditional Pixar fashion, the characters move MacGuffins around and take turns rescuing each other. There are some nice touches along the way, including a former magical coven that's been retrofitted into a Chuck E. Cheese-style restaurant.

The older brother character Barley, voiced by Chris Pratt as a seeming tribute to Tenacious D-era Jack Black, is a great creation. He's a guy who lives somewhere at the intersection between rock 'n' roll and medieval fetishism, in the tradition of Led Zeppelin.

Also, in the cast is Julia Louis-Dreyfus as the voice of the boys' mom and acquitting herself much better than the recent flop Downhill. Mel Rodriguez, the veteran character actor, voices her boyfriend, a cop who's also a centaur, while Octavia Spencer is a long-retired manticore who makes a triumphant return to heroism. The film also does that half-hearted representation grab thing where it has a minor character—a cyclops cop voiced by Lena Waithe—mention in passing that they're gay, before disappearing from the movie entirely.

But what’s best about Onward is that, near the end, it adjusts the stakes and makes clear that the movie is about something different than what you thought it was. It's a tear-jerker in a way that's earned, almost on the level of Coco's ending.

Onward is, by far, the best movie of 2020 to date and also better than every animated feature film of 2019. And at a time when Pixar has been too dependent on sequels, it represents the best of what the animation studio can do.