A Boy and His Dog (1975) is a tightly-plotted, well-paced, and cheerfully nasty movie. 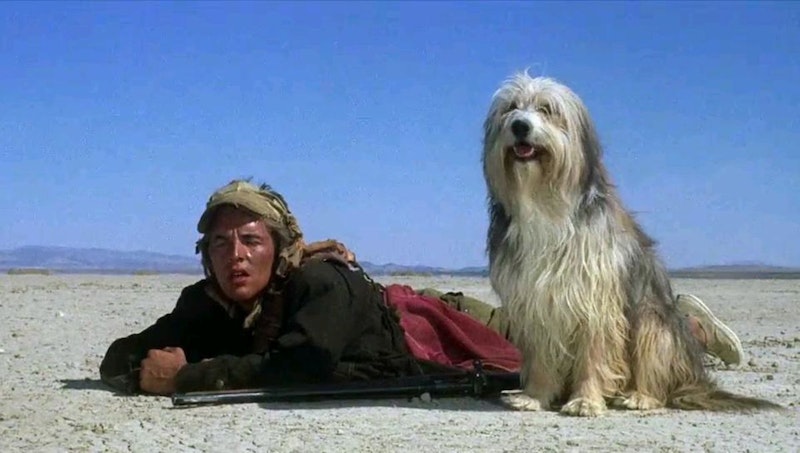 “Sending a woman to see A Boy And His Dog,” wrote science-fiction novelist Joanna Russ in 1976, “is like sending a Jew to a movie that glorifies Dachau.” It’s possible to understand what she means while thinking she may be overstating the point. In fact, how you feel about the movie may depend on whether you view it as convincingly misanthropic or merely misogynistic.

A Boy And His Dog was released in 1975; it was written and directed by L.Q. Jones, based on a 1969 novella by Harlan Ellison (which Ellison later followed with other short stories and an un-filmed teleplay, collected in the 2018 volume Blood’s A Rover). Ellison supported the movie overall, while also referring to the “moronic, hateful chauvinist last line, which I despise.” For Ellison, that’s a fairly warm reception of an adaption of his work.

The story takes place in 2024, after a Fourth World War that lasted five days. “Politicians have finally solved the problem of urban blight,” we’re informed, before we get introduced to a post-apocalyptic wasteland. Vic (Don Johnson) is a boy looking for a girl to rape. Blood (the voice of Tim McIntire, who also composed the music for the film; one of the performers was Ray Manzarek) is a grumpy telepathic dog who helps find Vic girls. They fall afoul of the plans of a remnant of the old society, a group of radical small-town conservatives who’ve recreated the town of Topeka in an extensive underground bunker—the game Fallout draws much from this film—and who have sinister designs on Vic, using a girl named Quilla June (Susanne Benton) as their bait.

The film’s tightly-plotted, well-paced, and cheerfully if self-consciously nasty. It’s punk a year before punk hit big, giving us a world defined by brutality and betrayal. Two worlds, really; the first a desert dominated by roving gangs, the second a parody of 1950s Americana. The two halves of the film work together, both unhinged though in different directions.

The acting’s strong, though the two leads are a trifle miscast. Johnson’s watchable, and alternates between a fine swagger and a convincing pout as Vic. But at 25 he’s a bit too old to be a convincing youth; the film reads differently if we think of Vic as an overgrown adolescent instead of an actual adolescent.

McIntire, on the other hand, is fine in creating the world-weary Blood, always annoyed and often pissed off at Vic. The problem is that, understandably, Blood’s filmed by putting McIntire’s voice-over atop a performance by an actual dog. Who is clearly not annoyed or pissed off. It tends to emphasize how un-doglike Blood is as a character; he’s a human in a dog’s body, and the dog we see on screen is an actual dog doing his best as any good boy does.

That aside, the film looks solid. The gunplay’s convincing, and night scenes look like they’re actually shot at night; the lighting’s stark and engaging. Dialogue’s clever without being witty, giving a feel for the world, telling us all we need to know about how things ended up and what society’s like in this future. Even the second half of the film, which necessarily involves more exposition, flows well.

There’s a strong tone to the movie, an exultation in its own viciousness. Its satire of middle America is tepid now, but would’ve felt stronger in the mid-1970s when Nixon’s silent majority was not entirely mythical. At any rate the lead characters, who end up opposed to the malign forces of Topeka, aren’t idealists either. Vic’s pure id, while Blood’s more cerebral but no less cruel, complicit in Vic’s rapes, and delivering the final line that was too much for Ellison.

If you view the movie as purely misanthropic, there’s no problem. But Russ has a point that it’s at least easy to read the movie as especially misogynistic on top of that general misanthropy. It’s not just that the sexual violence, or that the one main woman character betrays Vic to his enemies and is an untrustworthy ambitious schemer. It’s also open to question whether the movie understands that its other characters aren’t any better.

Vic and Blood are both despicable, and their friendship surviving at the end of the movie isn’t good. It’s possible to read the film as a brutal tale about two brutal people surviving through a brutal world. If it did what it wanted to do, you’d come away from it thinking that human civilization was a doomed idea from the start, that human beings were inherently vicious, and any human power is necessarily unjust. Instead you’re at least as likely to come away thinking the movie’s celebrating the tie of boy and dog, rather than mocking the idea of friendship as an inherent good.

The movie’s less misanthropic than it wants to be, then, but you can also argue that it describes a specific kind of male fear, maybe something more common in the 1970s and maybe not: the fear of domesticity as a kind of violation. At one point, Vic’s captured by the evil forces of Topeka and strapped down as his semen’s mechanically extracted from him. He’s used to repopulate the town, so Topeka’s young ladies are brought to him one by one and briefly “married” to him while he lies imprisoned and violated. It’s a scene you can argue derives from a fear and hatred of women, but it’s also a weirdly concise expression of a fear of marriage as imprisonment, of a civilisation that merely milks men for children.

That fear of society underlies Topeka as a whole. There’s a surreal sense of nightmare to the place, with its people in white makeup—presumably emphasizing their whiteness, part of the conservative fantasia of small-town America. It’s a nightmare because it’s a distortion of who human beings are, or so the movie seems to argue; Vic claims it’s cleaner up on the surface. Yet he doesn’t do anything to topple Topeka, doesn’t even help Quilla June to lead a rebellion, because for him there’s no fighting city hall. Only escape.

The movie plays with a potent myth, the myth of virtuous-but-feral nature against peaceful-but-corrupt civilization. The myth of the outlaw. Which doesn’t really square with a thoroughgoing misanthropy; the movie’s not skeptical enough of its own mythology. A Boy And His Dog is a bracing piece of nastiness, but it’s not nasty enough to do everything it wants.