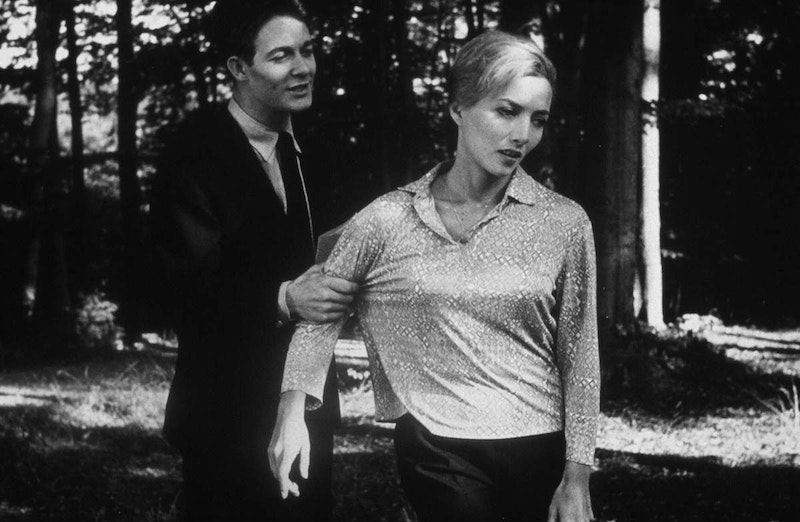 Kino Lorber has two new 4K restorations of films by Claude Chabrol, salvaged from his no man’s land in between Les Bonnes Femmes in 1960 and Les Biches in 1968. The films are The Third Lover, from 1962, and Line of Demarcation, from 1966. The former was the last straw for Chabrol before he took work for hire and sought out more commercial scripts, as Kat Ellinger points out early in the commentary track. But besides major early works like Le Beau Serge and Les Cousins, significant chunks of Chabrol's body of work are out of print or languishing in awful-looking DVDs released by Pathfinder and Wellspring in the early-2000s.

Les Bonnes Femmes hasn’t been available in English for nearly 20 years. Chabrol died in 2010, and he’s still due for a critical and commercial reevaluation. Please, more restorations and re-releases. Given how prolific he was (on average, a film a year or more from 1958-2009), it’s frustrating how inaccessible his work remains.

The Third Lover is a very familiar riff for Chabrol—an obsessed, insecure or incompetent man (Paul) seeks to replace or defeat an arrogant, aloof but powerful man (Charles). There’s usually a woman named Hélène played by Stephane Audran, and here she is, a year before her marriage to Chabrol and eight years before the director thought she “really became an actress” (during a scene on a bus in La Rupture). Jacques Charrier plays Albin, a French journalist who becomes consumed with Audran’s Hélène and equally jealous of her boorish husband Andréas Hartmann (Walter Reyer). A young man caught off guard by a crush and determined to destroy the perfect life with Hélène he can’t have, and succeeds.

The Third Lover ends with Hélène cut open by a steak knife wielded by Andréas, furious after Albin provides photos he took of Hélène and a lover kissing in Munich. Albin’s in love with Hélène, and as cold as their marriage appears, she insists that Andréas and her have a “very special bond.” She mentions saving him from suicide at the beginning of their relationship. So of course she ends up not only dead, but also carved, ready for her close-up on the balcony before a screaming Albin below. He insists on taking the blame, but Andréas refuses to deny responsibility for his actions. The film ends with an overhead shot of Andréas led away from his home in handcuffs while Albin stands by the cop car, helpless. “Please! Let me atone!” All the murderer has to say to this little bourgeois prick: “I pity you.”

In so much of Chabrol, legal innocence is the biggest burden. Michel Bouquet’s character in Just Before Nightfall commits suicide over it, unable to get anyone to condemn, even admonish, his accidental killing of his mistress (one of Chabrol’s best scenes is the walk Bouquet and his lover’s husband take, when he confesses to the murder—the husband, a good friend, appears nonplussed and by the end of the walk has forgiven him. This compounds Bouquet’s pain like nothing else).

The Third Lover ends with the same compounding of pain, sorrow for having been so naive as to try and break up a marriage. How dare you. That certainly deserves prison. Chabrol’s studies of the upper middle class in France wouldn’t resume for another six years, and at only 80 minutes, The Third Lover is a worthwhile curio for fans who want more malaise in skinny suits and gardens, like À double tour or the best of this cluster, 1963’s Ophelia starring Andre Jocelyn (a great lead performance).

Line of Demarcation is another predictor of future Chabrol films, the first of many about the Occupation and Vichy France. Featuring regulars like Maurice Ronet, Claude Léveillée, and Audran, along with Jean Seberg, we follow the people of a French town struggling with new Nazi neighbors and smuggling Jews and POWs. Contrary to the posters, this isn’t a frontline combat war film. The Nazis terrorize the French merely through their presence, and the slippery allegiance and affinity between officers and the people they’re oppressing.

As Samm Deighan notes on the commentary track, Line of Demarcation was the first major French film to acknowledge that not everyone under the Nazis acted honorably. People sold out their fellow Frenchmen and innocents like passing Jews. But unlike Godard, who excoriated the French military with Le Petit Soldat in 1961 for using torture—before the Algerian War was even over—Chabrol makes his case politely. Remember, this the man that made Nada, a “both sides” critique of leftwing terrorism as no different than a fascist state.

Chabrol has never been on the side of those who throw bombs, like his former colleague at Cahiers du Cinema said in his film The Image Book. As much as I talk and write about that film, and how it will inevitably be overlooked upon his death in favor of his immensely influential run of films from 1960 to 1967, Godard’s obituaries will correctly cite him as the most important figure of the French New Wave and one of the most important critics and filmmakers in the history of the medium.

Next to anyone else, Chabrol would be widely considered the master he is. But this is also the man that made Pleasure Party, his supreme masterpiece, a radical act of self-flagellation by writer, star, and frequent Chabriol collaborator Paul Gegauff. There’s so much more to this man’s body of work than the extremely reductive and largely wrong cliche about him being the “French Hitchcock.” He really isn’t, there’s hardly any of Hitchcock’s formalism and aside from a few really gripping thrillers (Nightcap, Masques, The Cry of the Owl), Chabrol is dry, methodical, maybe even ambivalent.

But these two films are worth consideration by fans. They’re solid middle-tier Chabrol, and in the context of his career, they’re early examples of what would come in later decades. These are surprisingly mature and fully fleshed-out films on their own though: Line of Demarcation is as tightly plotted and sober as something like Story of Women, Violette Noziere, or even his straightforward take on Madame Bovary in 1991. Among the dozens of films he made, there are many more that deserve a 4K restoration—La Cérémonie is a no brainer given its parallels to Bong Joon-ho’s Parasite—but any Chabrol is good news. Just not The Twist.