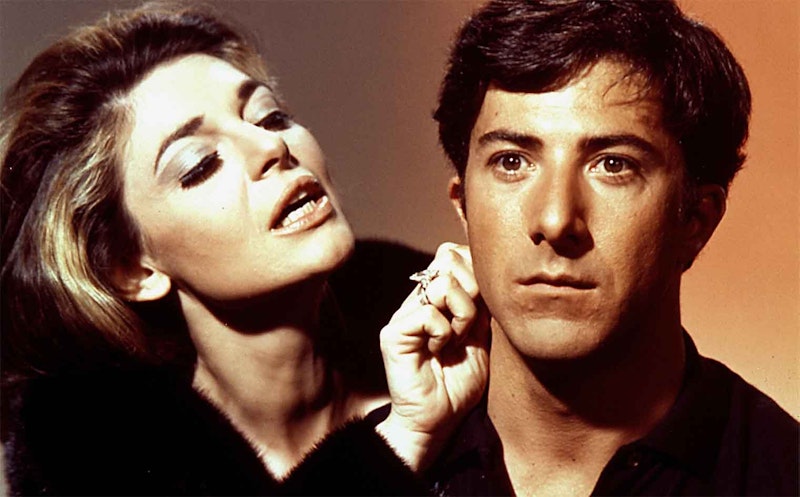 It had been several decades since I saw the 1967’s The Graduate in a theater; five or so years ago I watched a DVD of the “plastics” film with my younger son, and thought it lost some juice over the years. On Labor Day—when the Red Sox and several other teams were off, which is very strange scheduling—Booker and I looked at the movie listings and it was a choice between the chancy Tel Aviv on Fire and a revival of The Graduate at Baltimore’s grand Senator Theater. We opted for the latter, and it was the smart move: maybe it was the restored print, or the big screen, but I’d forgotten just how sensational Anne Bancroft was as Mrs. Robinson, easily the best performance in the film.

Dustin Hoffman (playing oddball protagonist Benjamin Braddock) also had his share of moments. In the opening half hour, during the party for Ben’s graduation and early maneuvers with Mrs. Robinson, it appears Hoffman is mentally preparing for his role in Rain Man (1988), a pretty good film that was only partially ruined by Tom Cruise. And speaking of Cruise, there’s a scene in The Graduate, when Ben takes Mrs. Robinson’s daughter Elaine (Katherine Ross) on a forced date to a strip club in a dirty part of Los Angeles—in comparison to their respective families’ large houses in a suburb—and there’s a shot of Hoffman, maybe 10 seconds, where he’s wearing sunglasses and flashing a wide grin that’s identical to Cruise’s well-known look in his breakout film Risky Business (1983).

Ross isn’t much as Elaine, no match for Bancroft or Hoffman. An adequate foil, I suppose. What I didn’t like about seeing The Graduate almost 52 years after it was released—and I thought otherwise upon first seeing it at a film series at Johns Hopkins in ‘73—was I left the Senator with Simon & Garfunkel songs coming out of my ears. Although I liked the duo as a youth—but couldn’t stand Simon’s solo work, save the catchy “Me and Julio Down by the Schoolyard” and “Kodachrome”—this is an “iconic” act that seems silly or trite today, although the harmonies do hold up. A few years ago, I wrote a piece about S&G and I’ll stand by that.

It isn’t Paul Simon’s fault that director Mike Nichols made a complete hash of the film’s score—I don’t think any director successfully incorporated rock ‘n’ roll until Easy Rider in 1969, which was really tardy—but hearing the painfully Dylan-lite “The Sound of Silence” three times wasn’t “ear candy” but rather an “ear bleed.” Similarly, I never needed to hear “Scarborough Fair” again, ever, but watch The Graduate and you take the canned peas along with a crisp October Macintosh apple.

Nichols does almost everything else right, from the kaleidoscopic camera shots of the confused/exultant Ben, to the then-risqué subject matter, to a number of hilarious scenes at the Taft Hotel. I also chuckled when Ben’s father (William Daniels), at first toasting his son, obnoxiously to neighbors, as if he were a show horse, and then, as Ben is floating in the pool during the day, thinking about his nocturnal rolls in the hay with Mrs. Robinson, becomes annoyed by his son’s aimlessness, saying it’s fine to drink beer and swim, “but it’s been two weeks now!”

It could be that I’m shoveling the goo on The Graduate because two days earlier I’d seen the disastrous new After the Wedding—my son Nicky pegged it perfectly earlier this week, citing the complete waste of actresses Michelle Williams and Julianne Moore—but I don’t think so. The Graduate’s one of the great films of the 1960s, not only for the writing and direction, Bancroft’s career performance, but also the dour portrayal of affluent youths not yet affected by the counterculture. Also, it was kind of weird knowing that most of people on screen—main characters and extras—are all dead now. It’s not logical—it’s a given watching, say, On the Waterfront or High Noon—just an older fellow’s nostalgia tic.

Popular conservative writer Jonah Goldberg published a terrific column last week, suggesting that tentative Democratic front-runner Joe Biden go back a century and run a front-porch campaign. Goldberg, like me, doesn’t like Biden or Trump, but says this strategy would be “dignified” and good for the country. Maybe that’s wishful thinking—we’re well past the point of “dignity” or integrity in politics—but it would definitely elevate Biden’s chances of winning the nomination. He writes: “Getting into arguments with political Lilliputians like Sen. Cory Booker or Andrew Yang elevates their profile while lowering Biden’s.”

This makes sense: Biden’s daily flubs, both incidental and astounding, could eventually bring him down if he continues to share debate stages with his more quick-witted competitors. The media would go crazy—another benefit for the moderate Biden—and so would Trump, especially if the former Vice President flips the script (if he wins the nomination) and refuses to debate the incumbent a year from now. It’s hard to out-Trump Trump, a lesson Elizabeth Warren, Bernie Sanders and the fading Kamala Harris haven’t absorbed, so in a presidential contest that no one has a grasp on, it’d be unexpected, and brilliant, if Biden throws out the playbook and wins the White House.