Jackie belongs in Madame Tussauds, not at any awards ceremony. 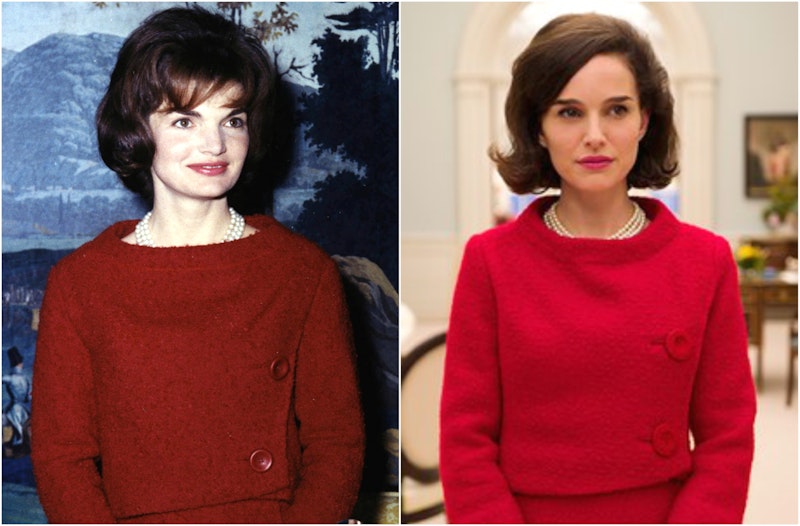 As far as awards season flotsam and jetsam goes, there’s nothing more offensively boring than the historical drama that revolves around a singular, tour-de-force performance. Steven Spielberg’s Lincoln is obviously the gold standard for this, a dreary and programmatic take on the end of the Civil War with Daniel Day Lewis carved into a wall somewhere, his method acting and embodiment so severe that critics come out of it drunk on the awesome power of prosthetics and good makeup. Who cares if Lewis only answered to “Abe” on set if the film he’s so committed to amounts to nothing? I hated Silver Linings Playbook, but it wasn’t boring: I’ll admit it was an original story, even if I disagree completely with its tone and the conclusions it comes to. Bradley Cooper and Jennifer Lawrence were rightly lauded for their roles in Silver Linings Playbook because we’d never met those people before. They exist solely in those couple of hours. When you’re dealing with a period piece or historical drama, depending on how well known the subject is, you really have to be sensational or come at it from an odd angle to make anything memorable. Lincoln was garbage because it expected us to be hypnotized by Daniel Day Lewis at the expense of an original script and a made-for-TV aesthetic that is profoundly uninteresting.

Jackie, directed by Pablo Larraín and starring Natalie Portman as Jacqueline Kennedy-Onassis, is a confused mess, though mercifully short compared to Lincoln (only 99 minutes). All the press leading up to the film’s opening on Christmas Day talked exclusively about Portman’s “career-defining performance,” and up until I saw it yesterday, I had no idea what it was about. Yes, it stars Portman as the former First Lady, one of the most famous ever, an icon of fashion and grief and Camelot and blah blah blah. So… what about her? Why the movie all of a sudden? She died 22 years ago, last I checked a Kennedy didn’t run for president this year, and I’m not seeing any of the socially conscious boxes being checked here. Very white, very rich, very staid, run of the mill.

This kind of movie upsets me more than most because so many wonderful components are on display: Portman is wonderful as Jackie, but how can she garner any acclaim when she’s wonderful walking around an empty shell of a movie? She’s got the voice and the faces and the tics nailed down, but everyone else is out to lunch: Peter Sarsgaard, as RFK, is practically the only other halfway alive person here (though no Massachusetts accent is odd), everyone else—JFK, LBJ, Lady Bird, William Walton, Nancy Tuckerman—come courtesy of Madame Tussauds. Billy Crudup is fine as Theodore H. White, the journalist who profiled Jackie for Life at the end of 1963. But he’s just there to prop up the incoherent structure: we experience Jackie’s story as she tells it to White. There’s no point in chopping up a story with a timeframe this brief—we’re talking a matter of days—and make it nonlinear. It serves no one, it isn’t some clever device meant to mimic Jackie’s scattered, sorrow-stricken mindset. Portman is constantly shoved in our face, either in close-up or melodramatic tracking shots, and this movie really expects its audience to be so caught up in the living embodiment of a famous dead person that they don’t notice there’s nothing around it.