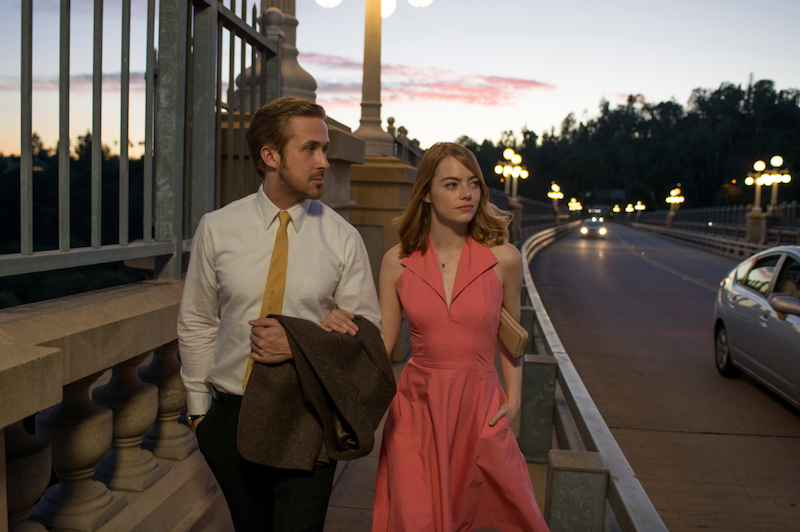 At some point, 2016 acquired a reputation as a “bad movie year.” I’m not sure why: some combination of almost every summer blockbuster being terrible, and a series of think pieces written about the “superiority” of TV. But 2016 ended up as a fine film year, and aside from the January doldrums, there wasn’t a single weekend in which a moviegoer couldn’t walk into a theater and not expect to see a least one above-average film.

1. La La Land. Damian Chazelle’s Los Angeles fantasia is both a tribute to classic Hollywood and an approximation of it—a film that knows it’s corny and makes no apologies for it. It features gorgeous visuals, crackling chemistry between Ryan Gosling and Emma Stone, and first-rate musical numbers. It's pure, unapologetic movie magic.

2. Everybody Wants Some!! Richard Linklater’s “spiritual sequel” to Dazed and Confused, a baseball movie that’s not even set during baseball season, was the widest I’ve smiled at the movies all year. It’s got an eclectic, lively group of friends, played by mostly unfamiliar actors, and adds on a sweet romance between Blake Jenner and Zoey Deutch.

3. Moonlight. Barry Jenkins’ film about three eras in the life of a black boy in Miami is a small story with so much going on. It’s stacked with great performances, starting with Mahershala Ali and Janelle Monae, and it leads up to the best third act of the year. We need more movies like this.

4. Manchester by the Sea. Kenneth Lonergan’s film may be the ultimate tearjerker, featuring the best performance of Casey Affleck’s career, but it’s also surprisingly funny, and a rare film set in New England that doesn’t collapse into self-parody and bad accents. Extra points for avoiding the cop-out ending that I was afraid was probably coming.

5. The Edge of Seventeen. Kelly Fremon Craig’s coming-of-age drama wasn’t seen by many people when it came out last month, but it’s the best teen movie in years, featuring a revelatory performance by Hailee Steinfeld. Her banter with Woody Harrelson, as her teacher, is something to behold.

6. Hail, Caesar! The Coen Brothers’ latest film isn’t their most ambitious effort, but it’s hilarious throughout, and yet another 2016 film dedicated strongly to recreating an approximation of the old Hollywood. A great cast helps deliver the most laughs in a Coen comedy since The Big Lebowski. The scene with Josh Brolin’s executive meeting with a rabbi, a priest, a reverend, and a padre is the hardest I laughed at anything all year.

7. Krisha. Trey Edwards Shults’ micro-budgeted indie is heartbreaking in its simplicity and beauty. Shot in the director’s parents’ house and mostly cast with his family members, it’s the story of a 60-year-old woman (newcomer Krisha Fairchild) returning to her family on Thanksgiving after years of estrangement.

8. Tower. Keith Maitland’s amazing treatment of the 1966 University of Texas shooting is both the year’s best animated film and its best documentary. Featuring rotoscopic animation of the events of that day 50 years ago, as well as talking head interviews, it takes a tragic story and renders it with poignant beauty.

9. Toni Erdmann. The year’s most surprising comedy was a nearly three-hour father-and-daughter German film from director Maren Ade. Hilarious, and also very touching, and featuring the best on-screen performance of The Greatest Love of All since Coming to America.

10. I Am Not Your Negro. There were a lot of solid documentaries this year that dealt with the subject of race in America, from OJ: Made in America to 13th to Do Not Resist. But the best of all was Raoul Peck’s adaptation of an unpublished James Baldwin novel, read by an uncharacteristically subdued Samuel L. Jackson.