When Reality TV Eats Your Art

How the judges tripped up Laurence on Project Runway. 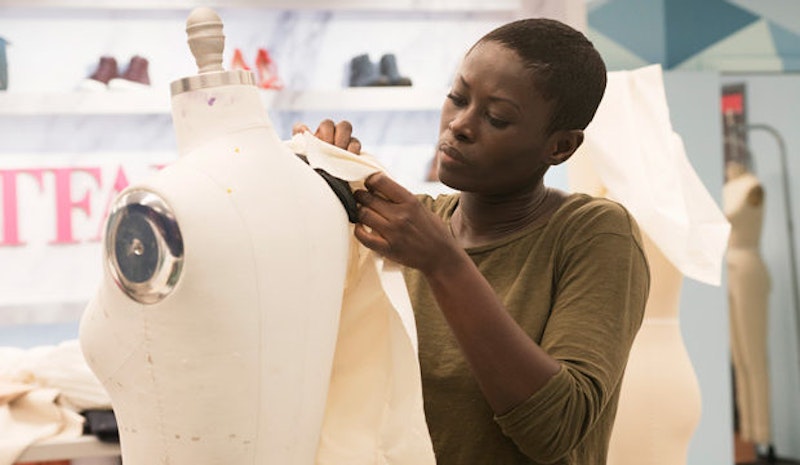 Erin won Project Runway Season 15 with her cutesy, crafty art school aesthetic complete with banana dress, and lots of people are pissed. I was disappointed by the finale too, but not because Erin won. Rather, because she kind of deserved to win. Laurence Basse, with her jaw-dropping leather-work, was my favorite designer over the course of the season—but in the finale, she choked. Her collection was professional and cool, but it lacked the oomph of many of the items she made during the season challenges, when she churned out must-have pieces in a single day. She didn't even include a leather jacket—her signature piece—in her finale. What went wrong?

Sometimes when you're an artist, you just aren't inspired; anyone can fumble a project. In this case, I think Laurence didn't so much drop the ball as she got tripped, and then kicked on her way down. In short, in that great Project Runway tradition, I blame the judges.

Specifically, I blame the judges for being more interested in a good story about an artist than in the artist's work. Contestants throughout the season referred to Laurence as a "beast." That sounds like she was dramatic and fearsome—but in fact, it’s almost the opposite. She was fearsome because she was not dramatic. Every challenge, other designers would thrash around in a panic, trying to figure out how to turn hunks of metal into clothes, or scrapping their designs after mentor Tim Gunn raised his eyebrows threateningly during the critique. Not Laurence, though. She always figured out a plan instantly, executed it impeccably, and came away with awesome clothes. She was never in the bottom three in the entire show, which means there was never a moment where it looked like she might go home.

This kind of consistency and focus is a huge advantage on a show like Project Runway, with brutal time pressure and escalating stress. But Laurence's steadiness also ultimately undermined her. On a reality show, the judges want drama.

Laurence did have a brutal backstory; her father disowned her when she became pregnant at 16, and he'd died without reconciling with her. She was a model herself, and perhaps the single most physically stunning contestant to ever appear on the show (not excluding season 9 winner Anya Ayoung-Chee, who was actually a beauty pageant winner.) A successful, determined single mother with a tragic backstory and a glamorous career should be enough narrative juice for any reality television show, you'd think. But the judges wanted more.

In particular, they wanted more of an arc. Erin, the eventual winner, started out with several challenge victories, lost her way, and then came back in the final episodes. Roberi (the runner-up), grew on the judges throughout the competition. Moments of weakness, or a slow start, create a storyline in which the competition itself can be figured as a growth experience or an important step in a designer's artistic development.

The judges were frustrated at being unable to fit Laurence into that kind of narrative. She won the second and seventh challenges, but after that her consistency worked against her. The judges got bored of her wonderful shoulder construction; got tired of her decision to work mostly in black. After, episode 11, in which Laurence made a stunningly elegant LBD that managed also to look like a tire, Nina Garcia practically crackled with frustration. "I want to see you break through!" she exclaimed.

Many designers on the show are young. It makes sense that a 22-year-old right out of art school might have a real creative epiphany on Project Runway, and some have. Laurence, though, is 41, and has been working in fashion, in one capacity or another, since she was a teen. She's a middle-aged artist with decades of forming her own aesthetic. It's preposterous to expect her to suddenly transform as a designer just because the judges, the producers, or the viewers think it would make good television if she did.

Yet the judges want what the judges want—and contestants who want to succeed will try to give it to them. Nina Garcia wanted something different, so, in her final collection, Laurence tried to do something different. She abandoned black as the dark color in her collection, using olive instead—and also tried to organize her collection around a personal theme. That theme was her trip out of the dark and into light. Which is a horrible. Especially for a designer whose theme really should have been, "I can make fucking kick ass leather jackets."

Laurence was happy with her collection, and perhaps she would’ve made the same wrong turn without the judges’ prodding. Nina signaled to Laurence that she was more interested in her as a biography than in her art. That's not uncommon; critics and fans alike have been as fascinated by, say, Sylvia Plath's trauma as by her poetry, and as titillated by Taylor Swift's break-ups as by her music. People want to hear the reality TV story of an artist often more than they want the art. Some creators can leverage that to their benefit. And sometimes, as with Laurence, the demand that the work be an advertisement for the self leads to weaker art, and missed opportunities.