The real problem with that classic Christmas bomb, Godfather III. 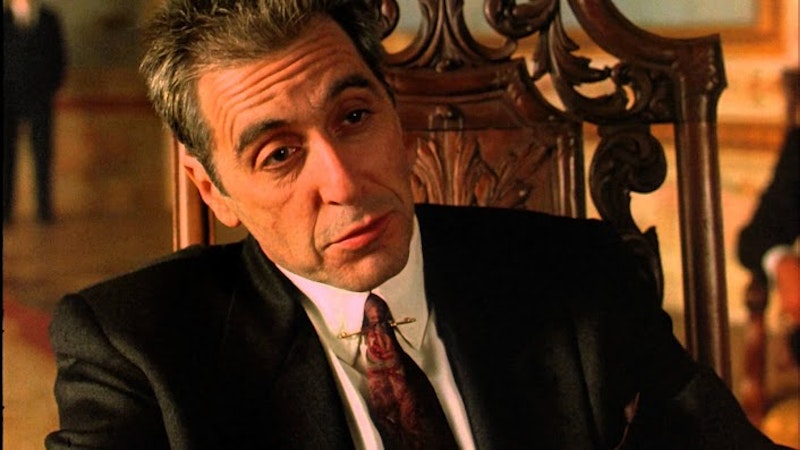 Michael Corleone ought to be depressed. A depressed, isolated hypochondriac who ends up killing his son. I mean the Michael Corleone in Godfather III, the historic turkey that affronted the world so many Christmases ago. Even Francis Coppola and Mario Puzo were let down, since (judging by the finished product) they’d have preferred to get the money without making a film. But none of the disappointed fans have singled out the turkey’s central flaw: Michael Corleone appears rather chipper.

Look at him in the opening scene. He buzzes about, nodding and smiling to associates. When the Andy Garcia character gets out of hand, there’s a reaction shot of Michael comically rolling his eyes; he’s like a sit-com dad coping with rehearsals for the school play. In general the opening has an air of happy bustle, with touchstone characters rolling up for recognition: Enzo the baker! Johnny Fontaine! Michael presides, and his biggest personal problem is that stand-by of the upper middle class, a child who prefers the arts over law school. That’s his son, Anthony, now an upstanding young man determined to sing opera.

I remember the Anthony of Godfather II, poor thing. “Anthony’s all right,” Michael told his wife. “Anthony is not all right!” his wife shouted back. Given that the little boy saw his mother driven out of the house, and that on her return visits the mother ignored him for his sister, you’d think the young fellow staring at his shoes would grow up into an adult plagued by neurosis. But no. A lot of Hollywood healing has taken place off-camera, the sort that allows the hero cop’s buddy to give a thumbs-up after being hit by 15 bullets.

Originally, the Godfather movies were about fathers and sons, with a heavy side-line in brothers. They were also about conflicts that tear the heart: for instance, not wanting to be a mobster, but wanting to avenge your dad, or not wanting to believe that your brother has betrayed you, but then finding that you want him dead. By the time Godfather III came around, the focus had shifted to a girl. That’s not necessarily a bad thing, but it is here. The girl in question is Michael Corleone’s daughter, whose only conflict is that she wants to have sex with her cousin. At the end of the movie she gets in the way of a bullet and dies. Her father feels terrible, and it just goes to show, though not anything much.

What should’ve happened: Michael Corleone should’ve had his son killed. In the first movie, Michael kills his brother-in-law and his soul turns dark. In the second, he kills his brother; his soul turns not just dark but cold, and he’s a lonely man sitting in a compound where there used to be a family. In the third movie, he’s just a fellow who encounters complications. “Just when I thought I was out, they pull me back in,” as the movie’s best-known line would have it. Greedy mob bosses want in on Michael’s last big deal, and then his daughter winds up as collateral damage. If only he hadn’t entered on his life of crime, she might’ve lived. Or if she’d stayed back at the hotel instead of going to the opera.

Sofia Coppola received a lot of blame for the rottenness of the third Godfather film. She played Michael’s daughter and she’s no actress; hence people could point at her and think they saw the reason for the film’s inadequacy. But her role was the bigger problem, and behind that problem was this: the filmmakers had forgotten what the story was about. That became clear as soon as Michael Corleone smiled.