The Tyranny of Toothsome Pretty Guys

Near Dark and the wrong suckers winning. 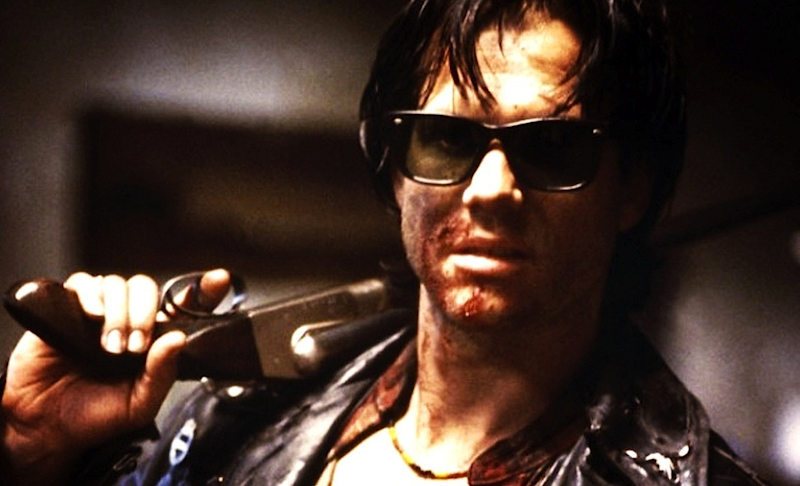 This is the 10th post in a series on women filmmakers. The ninth, about A Dry White Season, is here.

The whole point of vampire films is that you get to watch irritating people brutally murdered and damned for all eternity. Near Dark (1987) instead introduces us to a bland, worthless protagonist, and then spends an hour and a half gratuitously protecting him from the consequences of his own idiocy.

The protagonist in question is Caleb (Adrian Pasdar) a pretty boy Oklahoma veterinarian's son who hits on short-haired pixie cowgirl Mae (Jenny Wright). Mae's not just a pixie cowgirl though; she's also a vampire. She bites Caleb, and her vampire clan buddies kidnap and induct him into a life of auto theft, rambling, mass murder and blood-sucking.

Caleb is bad at the mass murder—he never kills, which is the behavior that makes him a protagonist. His refusal to slaughter, though, comes across less as a moral commitment than as squeamishness. Carlyle in Twilight resists his drive to kill because he has consciously and at great cost renounced murder and violence. Caleb just can't bring himself to kill and drink a victim's blood. But he's willing to let Mae kill for him. Nor does he protest when the vampire gang brutally slaughters everyone in a rural Texas bar. He helps the vampires escape in a shoot-out with the cops in which a lot of law enforcement officials die. He never expresses remorse, or even mild consternation about the piles of bodies he's left in his wake. Only when the vampires threaten his own family does he protest (largely ineffectually).

In theory, Mae and Caleb are in the grip of a great passion—a complicated but deep love. In fact, Caleb's treatment of Mae throughout the film borders on stalkerish. After they meet, Caleb offers to drive to her friends in the trailer park. Mae starts to behave erratically, babbling about the noises of the night and emphatically avoiding Caleb's efforts to embrace her. She becomes terrified as dawn approaches and begs Caleb to hurry and get her home. Yet despite her obvious distress, probable mental illness, and repeated refusals of consent, Caleb stops his truck en route and tells her he won't take her home unless she kisses him. It's only then that Mae bites him—which seems like the least he deserves for being a shallow, manipulative, abusive shit.

Even after he's bitten, Caleb continues to treat Mae like crap. Because he can't bring himself to kill, Mae lets him drink blood from her arm. The second time she does this, Caleb drinks so greedily that Mae becomes frightened, and has to push him away. She tells him he could kill her, and he just lies back and grins. Maybe he's high on the blood, but even so, he comes across as a selfish asshole.

Why does Mae fall for this hapless loser who’ll cheerfully suck her dry? Why does the movie lavish attention and care on a bland actor like Adrian Pasdar, who vacillates between vaguely smug and vaguely nauseous? Especially when you could kill his character off in the first scene and focus instead on actors like Lance Henriksen, Bill Paxton, and Jenette Goldstein, who use their fangs to enthusiastically chew up every bit of available scenery. Why derail your cool vampire flick with the sad story of some characterless schmuck?

You could argue it's all about the pretty face. Pasdar has regular features and an aw-shucks himbo self-assurance. That sways Mae—and perhaps director Kathryn Bigelow as well. Male directors, from Hitchcock on down, often seem smitten with their female protagonists. It makes sense that female directors might occasionally be smitten with male ones.

It's not just female directors who swoon over good-looking heroes despite (or because of) their worthlessness, though. For example, the recent film Passengers, directed by Morten Tyldum, who is a guy, is carefully constructed to forgive Chris Pratt for stalking Jennifer Lawrence and ruining her life—just as Near Dark is constructed to forgive Caleb for stalking Mae. Both dispense their forgiveness in similar ways; Pratt and Caleb get to do action-hero things towards the end of their films, erasing their creepiness in a rush of hearty hetero derring-do and special effects explosions. Caleb manages to destroy a whole coven of deathless vampires who have survived for hundreds of years. Experience, ruthlessness, and super vampire powers are nothing compared to having the plot on your side.

All the evidence suggests that men and women alike have an inexplicable, Mae-like soft spot for useless men. Slacker Harry Potter is universally beloved, while the much more competent, determined, and intelligent Hermione has to play second banana; Luke Skywalker whines endlessly, but he's cute so fate loves him. We're always told that sexy women can wheedle their way into unearned advantages, but it's good-looking guys who provoke universal swoons. A rakish smile, a manly tilt to the hat, and everyone wants to put you at the center of the universe.

At the end of Near Dark, Caleb turns Mae back to human by giving her blood transfusions—a simple cure that you'd think vampires would’ve discovered over the last several hundred years, but which it's left for Caleb to stumble upon because oh why the hell not. There's no indication that Caleb asked Mae if she wanted to be turned human again, and she awakes in some distress and confusion. Caleb embraces her enthusiastically as the credits role, but Mae, for her part, looks more frightened than ecstatic; her hands flap disjointedly as she stares, transfixed, at the daylight, which no longer burns her. Maybe they'll live happily ever after. Or maybe Mae is realizing she's sacrificed eternal life for a callous dipshit with a pretty face.