Giving Up on Marriage 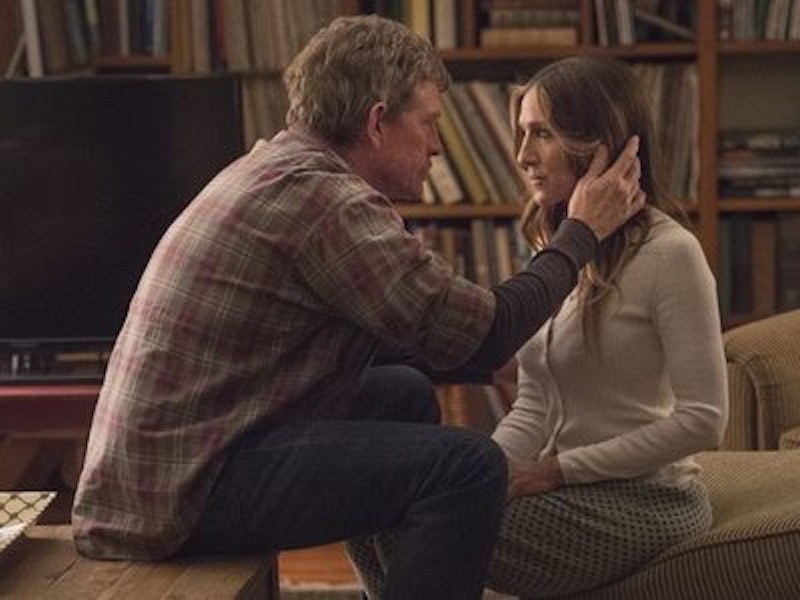 As Carrie Bradshaw, Sarah Jessica Parker invited viewers to ask whether it’s possible for an educated, career-oriented, late-capitalist woman to treat sex like a man. Her new show considers whether she can dissolve a marriage like one.

Divorce was my favorite show this year. Human, sharply-plotted, and tremendously funny, Divorce depicts a disaffected couple as committed to severance as they are to their own supreme ambivalence about it. Both sides of the ruptured dyad experience parallel bouts of indecision even as they increasingly give themselves over to the rote, alienating machinery of matrimonial litigation.

The conflict retains its emotional over-familiarity despite the inversion of whatever gendered stereotypes might remain of the normative dynamic. She’s the one with all the money and assets, and as a result the most likely to be on the hook for alimony.  He’s the one with a more demonstrable connection to the children, as well as most of the moral high ground. She initiates infidelity with a male bimbo, and he carries out a retaliatory affair only to emerge feeling lousy about it. He doubles back in search of rediscovering emotional intimacy, and she coldly slams the door in his face.

But switching those gender roles isn’t necessarily played for fresh spin or subversive commentary; it’ll be hardly noticeable to many viewers. Rather, Divorce succeeds by demonstrating that no matter what the particularized facts of the two individuals involved, divorce is always the same sad story. It’s a hellish vise of emotional corruption and economic callousness. It’s a mean microcosm of life’s grander and more general conditions of disappointment. As Frances and Robert inflict procedural violence on each other with the palpable look of desperate love in their eyes, one gets the acute feeling that marriage might be a dangerously overrated tradition.

Divorce serves as an opportunity to examine love and marriage today, particularly in light of contemporary public discourse on feminism and gay rights. When viewed from a critical perspective, the concept of marriage has a non-obvious place. In relation to social justice, sexual equality, and personal freedom, it’s bit unclear where family now stands.

At least since the 1950s, many feminists have understood marriage to be one of patriarchy’s key repressive structures. These theorists are often openly hostile to the institution of marriage. For example, the central plank of Shulamith Firestone’s radical feminism was abolishing the nuclear family, and in Dialectic of Sex she condemned the culture of monogamous love. Bluntly, “romanticism is a cultural tool of male power to keep women from knowing their conditions” and “love, perhaps even more than childbearing, is the pivot of women’s oppression today.” Firestone insisted that deconstructing monogamy was crucial to revolutionary feminism, holding that “women and love are underpinnings. Examine them and you threaten the very structure of culture.”

More recently, the concept of marriage has been crucial to the gay rights movement. But totally apart from the vile homophobia of social conservatives, marriage and family have also been controversial from a specifically gay perspective. For instance, in 2014 Bruce Benderson published Against Marriage and encouraged the gay community to rethink its focus on marriage.  He said, “Instead of opposing that obnoxious institution, marriage, they’re fighting to be accepted by it. To me that’s the strangest thing in the world. Why focus on a conservative institution connected to nuclear family values that has never respected the separation of church and state, when you can ensure the same rights other ways? Marriage is about family values in the most conservative way.” In other words, Benderson questioned why the gay rights movement was settling for something old and traditionally repressive rather than building something new and potentially liberating.

In The Second Sex, Simone de Beauvoir argued, “Modern marriage can be understood only in light of the past it perpetuates.” If that’s true, the question is why even in the face of so much progressive social change, we’re all still so committed to reforming marriage rather than abolishing it.

Juliet Mitchell considered marriage’s spooky trans-historical staying power in Woman’s Estate, a classic work of socialist feminism. “For though the family has changed since its first appearance, it has also remained.” For centuries, marriage has had “a certain rigidity and autonomy despite all its adaptations.” The endurance of marriage is particularly glaring from the perspective of historical materialism—marriage retained the same basic structure even as western society transitioned from feudalism to capitalism. In The Origin of the Family, Private Property, and the State, Friedrich Engels had already provided the standard Marxist reading of family as a power relationship directly related to economics. If economics changed so much between feudalism and capitalism, why hadn’t family?

Mitchell explained that in the shift from feudalism to capitalism, the lower and middle classes lost direct control over private property to the upper class. In exchange, the lower and middle classes were given marriage ideology, which provided “the focal point of the idea of individual private property under a system that banished such an economic form from its central mode of production—capitalism.”

In other words, the nuclear family now functions as an ideological stand-in for precisely that which is foreclosed in capitalism: autonomy, individuality, equality, dignity, and happiness.

Family sustains capitalism by reinventing feudal values. “This ideology which looks backward for its rationale is, nevertheless, crucial for the present… it rigidifies past ideals and presents them as the present pleasures. By its very nature, it is there to prevent the future.” Like a true Marxist, Mitchell believed the internal contradictions of the family would only serve to hasten its demise. But that’s not what happened. Capitalism has not fallen and neither has the nuclear family. Instead, we’ve seen almost entirely the opposite.

Theory is a vexing puzzle when it comes to living our real lives. In Maggie Nelson’s auto-theory memoir The Argonauts, the author explores precisely this tension: the difficulty of understanding tradition to be something threatening and fundamentally regressive, yet feeling moved to participate in it anyway. Nelson tells the story of her own marriage. On November 3, 2008, she and her gender-fluid partner learned that Proposition 8 was likely to pass the next day, banning gay marriage in California. The couple hadn’t previously planned on marrying, but soon rushed out the door to secure the right they were suddenly in danger of losing.

On their way to get a marriage license, they passed anti-gay protestors holding signs claiming homosexuals were killing marriage. “Poor marriage!” she thought. “Off we went to kill it (unforgivable). Or reinforce it (unforgivable).” Which one was worse? This is the paradox. Nelson was speaking in the context of a personal discussion of feminist and queer theory, but the issue is perfectly relevant to cis/hetero circles as well.  When it comes to marriage, do we know for sure whether we want to save it or kill it? Both options feel wrong.

In any event, marriage is in no present danger of being discarded as a patriarchal anachronism. As far as I can tell, it’s still solidly the norm. I’m roughly 30 years old, and I’ve already grown past the age where “all my friends are getting married.” By now, we’re starting to fall into two camps: those happily married, and those seriously starting to wonder whether lifetime monogamy is in the cards at all.

In the meantime, we can ponder all this while watching Frances and Robert bungle through their own impossible paradox. Divorce is a rare show that feels both intimately familiar and dramatically contemporary. It’s a story and the story. Like most things, whether you choose marriage or something else will depend largely on the stories you tell yourself. I hope we’ll manage to come up with a story that allows us to have our wedding cake and liberate it too. A hopeless romantic and a radical feminist can exist in the same body. As Maggie Nelson wrote, “There is much to be learned from wanting something both ways.”