An Interview With Anthony Fisher

Writer/Director of award-winning Sidewalk Traffic talks about how to get a feature film made by your mid-30s. 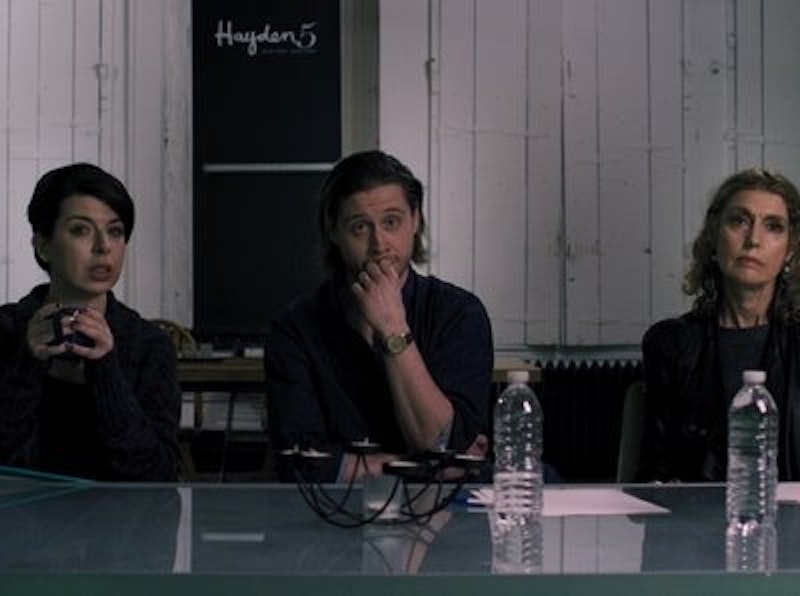 Anthony Fisher has worn many hats. At various times throughout his career, he's been a scriptwriter, film director, documentary maker, film editor, writer, and TV commentator. His numerous documentaries and interviews have been featured on Fox, CNN, MSNBC, and CBS. He now writes mainly for The Week, The Daily Beast, Vox, New York’s Daily News, and The Federalist.

In an email interview with Splice Today, Fisher discussed his first feature film, Sidewalk Traffic, released earlier this year, which won the Audience Award at the Lower East Side Film Festival and Best Micro-budget Feature at the Berlin Independent Film Festival. It's the story of Declan, a 30-year-old husband and new father in New York City facing both career and personal crises, who’s looking for salvation and the resurrection of his dreams while playing the role of stay-at-home dad. Sidewalk Traffic is available to buy or rent at iTunes, Amazon, Google Play, YouTube, and many other VOD outlets.

Splice Today: It came out of the blue when I heard about Sidewalk Traffic. I knew you as a writer with a libertarian bent for a number of publications, and a TV commentator. What did I miss about your background?

Anthony Fisher: After graduating from Emerson College, with a major in film and a minor in writing, I worked in various TV/film production jobs, wrote screenplays, and made a bunch of short films. I had scripts optioned, and my film Bed Head was purchased for distribution by Sundance Channel.

ST: Which directors have influenced you?

AF: In high school I was fanatical about Scorsese and Woody Allen. Tarantino had only made two movies at the time, but they were both game-changers for me. I also loved the Coen Brothers, especially Miller's Crossing, Fargo, and Raising Arizona.

ST: Any other particular films that had a great impact?

AF: Some other films that made me want to make movies included Say Anything, Chinatown, Dog Day Afternoon, In the Name of the Father, Cinema Paradiso, Grosse Pointe Blank, Clerks. I was kind of all over the place, a mix of high and low art.

ST: Was making a feature film always the ultimate goal?

AF: The short comedies were meant to train me for the big feature, which has been my lifelong dream. Everything, including the documentary work, helped hone my storytelling and technical skills, as did my work on numerous film and TV productions in roles ranging from production assistant to editor to assistant director.

ST: So that's what you'd recommend to aspiring filmmakers?

AF: The best film education is working on film sets. Do any job available. Be a production assistant, work the 14-hour days, listen, volunteer, don't be above any seemingly menial task. You’ll learn the life of the film set, how a crew is a living breathing organism, and how every fool-proof plan has a flaw and problems will need to be fixed on the fly.

ST: What would you tell young film school grads about how the business has changed?

AF: I'd say they should understand that the model I came of age trying to succeed in no longer exists. There's no more middle-class filmmaking or boutique indie divisions of major studios.

ST: What did the boutiques offer filmmakers?

AF: When I optioned my first script in the early 2000s, small-budget digitally shot movies could be financed by boutique companies under larger corporations. That's all long gone now. The only movies that get made are micro-budgets, genre films like low-brow comedies, horror, the occasional thriller, and of course big-budget tentpole movies that can spawn innumerable sequels.

AF: It's a low-risk project that studios can count on to be a major moneymaker, which is essential to them given that only about one in 10 films returns a profit.

ST: So you had to take the micro-budget route? Is that a bad thing?

AF: The upside is, you can make it! The technology is there now where it wasn't when I came out of school. The downside is, everyone else can too, so you're still a little fish in a much bigger pond.

ST: Your feature film, Sidewalk Traffic, was shot in New York City. What does the title refer to?

AF: It came to me when I was wheeling my newborn daughter in her stroller through my former neighborhood of Chelsea, which isn't child-friendly. I'd get glares like I was ruining someone's day. If I dared bring the stroller into a cafe during an un-crowded post-lunch rush, I'd be lucky to be seated—more likely I'd be ignored. Hence, pushing the stroller made me feel like sidewalk traffic.

ST: That sounds a little like wandering into the wrong bar in Boston while wearing a Yankees cap, although less life-threatening. Was making this film cathartic for you?

AF: Yes. It was therapy, it was necessary expression, and it was also a ton of fun. It was also incredibly stressful, could’ve fallen apart at least a dozen times, and was frequently all-encompassing.

ST: What's the backstory to the film?

AF: I’d taken the notes that I’d imagined might end up being a book someday, about my struggles with depression, new fatherhood, and sudden unemployment at the height of the Great Recession and turned them into a screenplay. That screenplay was Sidewalk Traffic.

ST: You wrote and directed the film. Has being an auteur been a dream of yours?

AF: I never really had auteur pretensions. I made it a point to refuse the "film by" credit on Sidewalk Traffic because, while I might have been the creative driving force, it's absurd that any one person "makes" a film.

ST: Since this film is so personal, I'm guessing you had some difficult moments in the cutting room, and some scenes you liked got dropped on the floor. Were you faced with some painful choices?

AF: Making a movie this personal definitely presented its creative challenges. There were moments that just had to go from the final cut. They were honest, but too raw, and my producer and I ultimately decided they would cast a shade over Declan that the audience might misconstrue.

ST: What was your approach to working with actors? Where are you on the spectrum from a control freak like Hitchcock, who said actors are cattle, to Woody Allen, who some actors have criticized for not giving them enough direction?

AF: With actors, I encouraged them to provide input, and allowed them to experiment within reason.

ST: Sidewalk Traffic draws heavily on your own personal experiences. Did you allow your actors any flexibility in deviating from the script?

AF: There was definitely no improv or ad-libbing, but if an actor felt more comfortable and in character with a few tweaks of words, I'd generally be okay​ with that.

ST: Could you give me an example?

AF: A few times an actor would say something like, "This doesn't make sense to me that the character would react this way." In a situation like that, I’d have to consider if the way I wrote it really is true to the character as interpreted by the actor.

ST: So your actors sometimes taught you things about your own characters?

AF: Sometimes. Each part of the process is creation, and good actors create. If I trust that they know this character, there are times when I'll sit back and think that might know this character better than me at this moment, so why not let them try it their way.

ST: So you'd give them a shot at it and then make your final decision later on?

AF: That's the thing about film. You can do it a bunch of ways and figure out the “true” scene later on in the editing process.

ST: How heavily did you rely on your team while shooting?

If my sound guy looked particularly engrossed in a scene, I might ask his opinion. I certainly relied on my producer Robyn K. Bennett and Director of Photography David Kruta for ideas on the spot.

ST: Was your editor on the set with you or did he/she not join you until shooting completed?

AF: Yes. Our editor, Ray Chung, was invaluable to have on set. He'd suggest shots that could be used as transitions in and out of scenes that I’d never thought of if he weren't on set with us. He was thinking like an editor when I didn't have the time or mental capacity to do so. So, new directors, if at all possible, have your editor on set!

ST: What sort of technical challenges did you face while shooting in New York City?

AF: Technical challenges were everywhere. The biggest one was always scrambling for locations, having some of those locations fall apart because of weather, lack of permits, or an owner simply reneging on the deal at the last minute.

ST: How about financial challenges?

AF: As a micro-budget film, we knew we could only shoot 15 days. We were working with SAG actors, so we had to "make our days," which basically means you don't go over schedule, no matter what.

ST: How do you make sure that happens?

AF: Sometimes it meant you had to move on from a scene before you'd like to, or even kill a shot in the moment because you simply had to reprioritize what you could shoot in the limited amount of time.

ST: Could you go into a little detail on the details of your financing?

AF: My wife and I put up a painfully significant chunk of our change, raised some additional funds from some private investors, and also raised about $20,000 in a crowdfunding campaign for post-production. We deliberately waited to crowdfund until after the film was shot, so people could have faith that the film would indeed be finished and it already looked good.

ST: What about future film work?

AF: I’d love to do another film, or a series, or write and direct for hire, but this was always number one. It used to burn in me, "When will I direct a feature film?" Well, it turned out I was 33 when I got the chance. Not too bad, and that question doesn't burn in me anymore.