After 19 months, Louie is back. 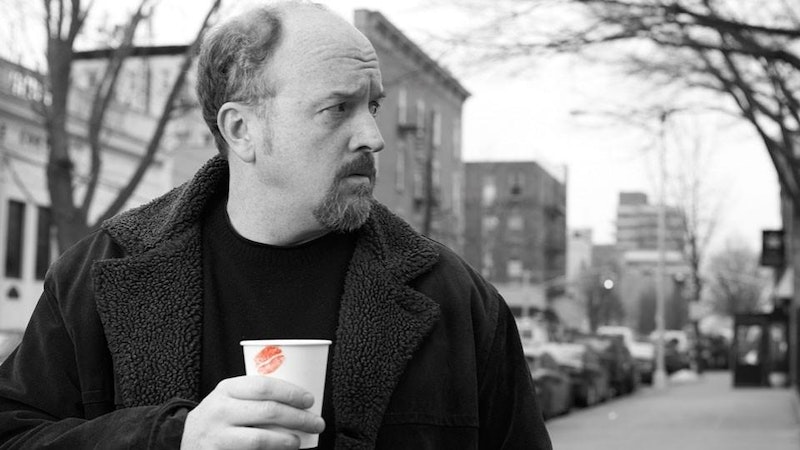 The opening scene of Louie’s season four premiere is one of characteristic absurdism: Louie, asleep in his NYC apartment, is awoken early one morning by garbage men piling trash into their truck’s compactor. They toss metal bins around the street, yelling and laughing; they beat trash bags with broken furniture. Louie rolls around in bed, he looks hungover. The garbage men break through his bedroom windows, throw trash bags around his room, knock over his TV and furniture and jump on his bed. Louie reluctantly walks to the bathroom.

Fans of the show have come to expect this sort of comedy. Think of earlier examples, like when Louie smokes pot with his neighbor in season one. “You wanna see something really cool?” his neighbor asks, before throwing a water jug out the window onto the roof of a parked car below. “I love that,” he says, and then starts up a bizarre “motor bong” contraption, as a woman with a rabbit mask sits in the background. Or, in one of my favorite scenes from season two, when Louie is riding the subway, looking at a seat with a slopping puddle of spilled soda. Everyone is disgusted by the mess, and as the scene cuts to black & white, Louie stands up, takes off his sweater, and mops up the seat. A black woman smiles and gently caresses his face; a man fist pounds him; a woman offers him a blowjob.

Even by the loose strictures of sitcom television, Louie eschews traditional narrative storytelling, with very little continuity between any of the episodes. In season one, Louie has a sad-sack brother, Robbie. In season two, he instead has three sisters. His ex-wife is sometimes white but more often black. Supporting actors often take on more than one role, as with F. Murray Abraham, who plays a swinger in the season two finale, only to return half a season later as Louie's uncle, Excelsior. "Every episode has its own goal," C.K. once told Jimmy Kimmel. "And if it messes up the goal of another episode... I just don't care."

In season four's second episode, "Model," Louie is invited by Jerry Seinfeld to perform at a benefit in East Hampton, only to show up a little late, wearing a t-shirt and jeans. Seinfeld, in full tuxedo, asks him what he's thinking and then borrows the oversized jacket of a security guard for him to wear. Louie's set is a disaster, with only one woman in the audience laughing (the beautiful Yvonne Strahovski). Afterwards, she finds him wandering around the parking lot, and gives him a ride to her beachfront mansion. "What's your name?" he asks her. She smiles, rubs his bald head, tells him she likes his hair. Later, she pulls off her dress and runs into the ocean, then takes Louie inside and has sex with him. It's a porn fantasy. "It's just, like, a very beautiful astronaut's daughter—" "Model," she adds. "Model? Okay. Let's throw that in there. Model... type of person doesn't usually take me home and have sex with me." "Well, maybe it's not really happening," she tells him. And whether it is or isn't doesn't really matter, because Louie is less a TV show than a deconstruction of all of C.K.'s hopes and fears—as in the season three finale, when Louie, on his way to the airport, has an unexpected run-in with a manic woman he once dated, Liz, who in a succession of quick-cut scenes collapses, is taken to the hospital, and dies, all while Louie is there to hold her hand and comfort her. It's hilariously solipsistic, and, when Louie is at its best, it's one of the most heartfelt shows (comedy or otherwise) to ever make it to TV.