An Anti-Terrorism PSA If Ever There Was One 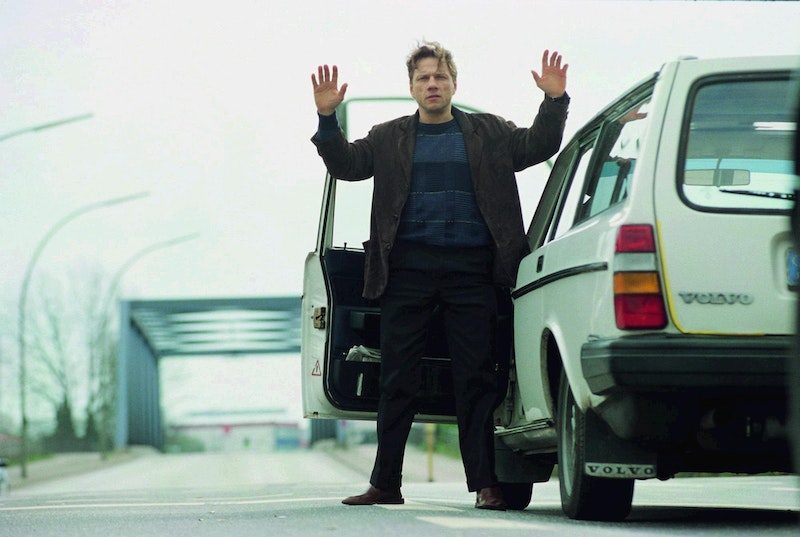 Several months ago, killing an afternoon at Daedalus Books in Columbia with my honorable father, I bought a DVD copy of The State I Am In sight-unseen for $6.98—probably because I wanted to broaden my cinematic palette, and also because the title reminded me of a favorite Belle & Sebastian song that surfaced in a favorite scene in Todd Solondz’s Storytelling, which came out a year after Christian Petzold’s The State I Am In. Countless fictional movies about terrorism exist—sometime back I reviewed one in this very space—but The State I Am In is the first one I’ve encountered about the incongruity of the fugitive terrorist life style and parenthood.

Two narratives are rolled into one here. In the main one, a 15-year-old daughter named Jeanne (Julia Hummer) is torn between fealty to her parents (Barbara Auer and Richy Muller) and the wider, beckoning world of youth, culture, and romance which she is implicitly not allowed to partake in; her burgeoning romance with a surfer who resembles a young Val Kilmer—and the lies each lover proffers—fuel a long string of fateful decisions. This storyline is in many ways the beating, bifurcated heart of the film, will mess with head and heart alike, will keep one watching through fingers, and has been addressed in numerous reviews already.

But the secondary storyline is of more aesthetic interest to me, and concerns the fact that beyond a certain point, international terrorism is a shit gig. Jeanne’s parents have been in hiding for 20 years, jumping incognito from country to country and never settling down anywhere; this requires the shuffling of passports and identities, weaponry hidden in hotel air conditioners, constant paranoia, and, if you’re the diligent mother and father of a teenage girl, mandating homework assignments and sharply critiquing them.

The paranoia in The State I Am In is pervasive, and early on, you want to take Jeanne’s side, and ask, “Why can’t everyone just relax?” In Portugal, the surfer bums a cigarette from Jeanne in a seaside café, and they exchange awkward small talk before she freaks out and bolts when Dad shows up. A few days later, in the same café, an older man approaches Jeanne and asks her to help translate a menu, but her parents spirit her away. There is much serious adolescent pouting and slouching that seems warranted, at least until the first in a series of dominoes tumbles.

Terrorism is morally reprehensible, but Petzold is adept both at generating sympathy for this family of outlaws and creating impression of a noose tightening. The audience is not given any backstory—we have no clue why these people are on the run, or what crimes they committed—but it becomes very clear they’re largely on their own, with the authorities mere steps behind. The forces of good or authority are often represented in cinema by some dogged, impassioned stand-in whom the audience can cheer for or damn. Petzold denies us that. Authority here is an endless cavalcade of black BMWs that convene with curt choreography at intersections or along back roads. Some footage is captured through closed-circuit cameras, as though we are watching court or documentary film of events long after they have occurred. The fellow travelers that the family touches base with are uncooperative—aging movement figureheads, greed heads who’ve gone straight, or rip-off artists. The overriding goal or objective of the parents is to get hold of some cash, flee to a Latin American country, and start over, but their odds, iffy to begin win, ebb as the movie churns on.

A lot of dots are left unconnected. It is suggested that an older revolutionary—who wrote a book about whatever movement the players participated in—is now a lush who no longer has any power at the publishing company he founded; it is also suggested, bitterly, that he may be Jeanne’s true father. A secluded meeting takes place where old wounds are hinted at, but the older revolutionary agrees to try to secure the equivalent of $30,000 for the family to make its escape.

A few weeks later, when he is preparing to bring the money, he’s accosted by a young woman who asks if he can give her a ride somewhere; he replies, twice, that he cannot. It feels like code language, and we see the older revolutionary continue to converse with the young woman, to whom he hands some cash. She walks away and is immediately slammed to the ground by military police, who quickly surround the older revolutionary with weapons drawn. Some distance away, the family realizes that something has gone awry. A helicopter swoops overhead, settling nearby, and the family dives for safety. They’re not apprehended, but the fear is there, and it’s communicable, pre-Bourne Ultimatium-360-surveillance-instantaneous-monitoring and all. If someone lays a hand on your shoulder while you’re watching The State I Am In without you being aware of it, you will leap out of your seat.