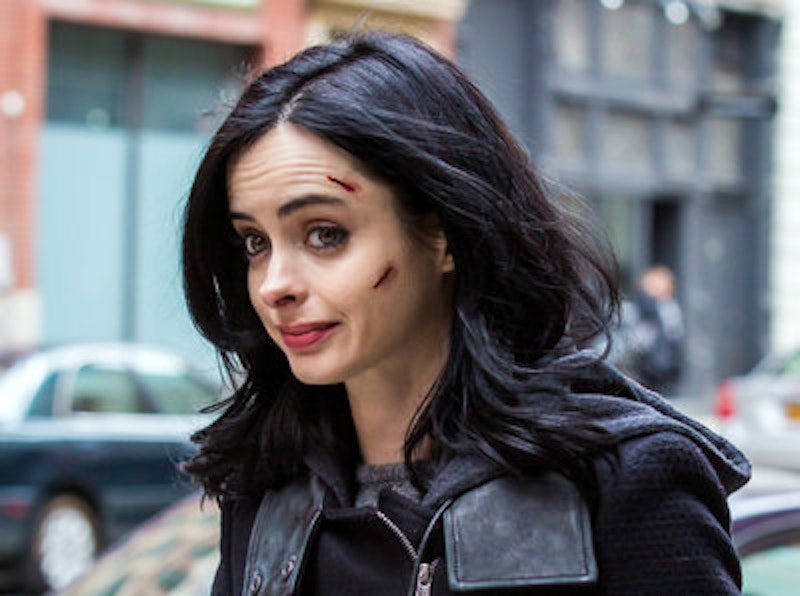 I liked the new Netflix series Jessica Jones—but while watching it, I was plagued by one nagging question. Why didn't Jessica Jones, or somebody, ask Iron Man to take out Killgrave? In theory, Jessica Jones is set in the broader Marvel Universe. Daredevil, Ant-Man, Thor, the Hulk, Captain America, and all the rest are supposed to exist in this universe. There's a passing reference to the first Avengers film, in which extra-dimensional aliens destroyed parts of New York.

That's mostly just incidental background that doesn't much affect the plot. But—shouldn't it affect the plot? Killgrave, the villain of the series, is a mind-controller who emits a virus that makes anyone within hearing distance (and sharing the same air) do whatever he wants. This is bad news for Jessica Jones and the numerous non-super-powered people who cross Killgrave's path. But it would hardly be a nuisance for Tony Stark, who flies around in a sealed battle suit, and has in addition, fully operational suits that could zoom over and bash Killgrave into unconsciousness from remote control.

You could argue that Killgrave is too low-level a villain to bother Iron Man about. But in the series he murders around a dozen people, and it's suggested that he's killed far more, and will kill even more than that, if he's not stopped. Tony Stark, for his part, is supposed to be about the best-known celebrity hero in the country. It's just hard to credit that someone, at some point, wouldn't think, hey, Iron Man could take five minutes and wipe this guy out. Give him a call!

Of course, part of the conceit of the series, and part of the reason Killgrave is dangerous, is that no one believes in him or his powers. So you could argue that Iron Man isn't called because people think Killgrave is a myth. But… again, the wider Marvel universe makes that seem silly. People in the Marvel Universe know there are superhuman beings who can do all kinds of crazy stuff—fly, summon lightning, shrink, turn into green monsters. Why would they stick at mind control? (And for that matter, if you called up Iron Man, he wouldn't doubt—he saw Loki use mind control in that first Avengers film.)

None of this really undermines Jessica Jones in a catastrophic way. If you're willing to believe a woman can punch through a brick wall, you can believe that the same woman didn't think to pick up the phone and call Iron Man. And it would hardly be a satisfying ending to the series, in any respect, to have Tony Stark whoosh in and solve everyone's problems. The show is in part about Jones' own struggles with her trauma. Killgrave used his mind control powers to rape her and control her for months. The series is a metaphor for her recovery from, and triumph over, sexual violence and domestic abuse. There's just no way in which salvation by Iron Man would be a satisfying, meaningful, or thoughtful way to end that story.

The existence of Iron Man off to the side in Jessica Jones, then, is a kind of plot hole the story has to skirt around. The upside of a shared superhero universe is the fun of bringing in special guest stars. The downside is that it's hard to make the shared universe work consistently, especially if you want Jessica Jones' New York to look, and function, somewhat like the real New York, with only a few tweaks (like mind control and super-strength) for excitement.

That points out the real limitation. The problem isn't that Marvel has a shared universe, but rather that superhero stories are determined not to let superpowers change that much of the world. If Iron Man profoundly affected the world—by, for example, using his genius to provide everyone with super-travelling suits rather than cars—you'd no longer have a superhero show, but a science-fiction one. The basic tropes of superherodom means that things can't alter too much.

This isn't necessarily bad. Jones' struggle to break free of Killgrave's control resonates because that struggle is recognizable. The police can't help her, and even attack her, much as the police are often indifferent and even hostile towards victims of rape. Killgrave's control extends everywhere, isolating Jones and trapping her, just as domestic abusers can shut off all avenues of escape, and seem to take complete control of their victim's lives, leaving no way to escape.

But the limitation on change also closes off possibilities. It forces a world in which, no matter what your powers or abilities or drive to do good, nothing can really change. Superheroes are fundamentally conservative, which means that there’s no structural response to injustice or evil. Heroes hit bad guys, everything returns to normal. That's the only story.

That's particularly unfortunate in Jessica Jones, which deals directly with sexual violence and domestic abuse. Jones does triumph over Killgrave—but it's a personal triumph, based on her grit and individual resilience. Somehow, never explained, he can no longer control her, and so she can defeat him. There are no institutions established to protect people from evil mind control, no technologies developed, no procedures put in place, no effort at greater community awareness attempted. Even the Killgrave victims survivor's group is presented as a joke, rather than as a real effort to deal with trauma. Superheroes, by definition, can't change the world. They can only hit one bad guy rapist, and wait for the next to pop up, in a society where nothing is ever learned.