A Taste of Honey Smoke

Trumbo is a set piece that Bryan Cranston chews to bits, and not much else. 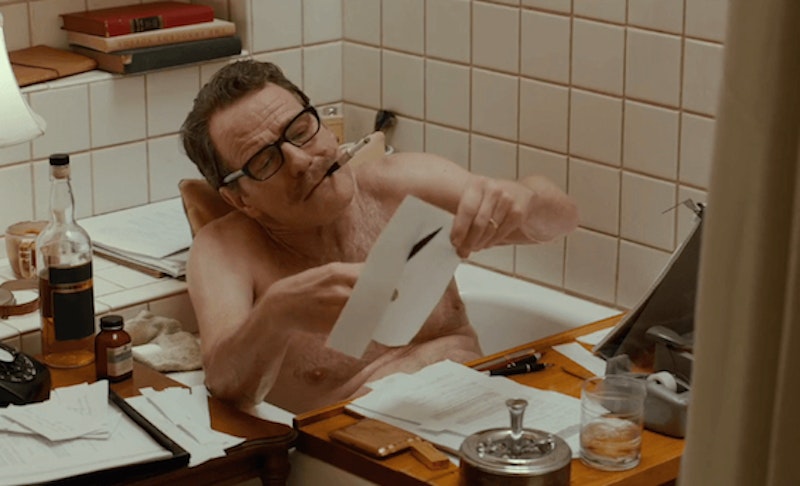 For the past three months, Baltimore’s Charles Theater has run the trailer for Trumbo before nearly every movie they’ve played. By mid-October family members and I had lines memorized, and would parrot them to each other in whispers. Hedda Hopper (Helen Mirren) asks blacklisted screenwriter Dalton Trumbo (Bryan Cranston) to “Whisper a movie you’ve written in secret—maybe I’ve even heard of it.” Cranston leans in and replies coyly, “Maybe you have.” Trailers never last this long at the Charles—elsewhere, movies like Star Wars and The Hunger Games are promoted with two, three, or four separate trailers months and months in advance. Inevitably, seeing what you’ve been teased for months is a bit-anticlimactic. When I was younger, I watched the trailers for Kill Bill Vol. 1 & 2, Eternal Sunshine of the Spotless Mind, and The Day After Tomorrow dozens and dozens of times, and after finally sitting through them, I felt a sense of loss rather than satisfaction, because I’d never get back my impossibly high expectations.

I didn’t wake up giddy on Thanksgiving knowing I’d see Trumbo in a matter of hours; I was looking forward to getting it over with. I could watch Cranston ham as anyone for hours, and he carries this movie on his back. It’s simple without any flair or sparks besides its star. Two years ago I probably would’ve cited it as an example of the film industry’s increasing disinterest in aesthetics, but I’ve stopped noticing the new normal. Writing for City Paper, Dominic Griffin says that director Jay Roach is “comically out of his depth [as a polemicist],” adding that it’s “a toothless affair, taking for granted that maybe the persecution of the liberal elite isn't quite the evergreen narrative topic it once was.” I never even considered this a political or message movie, it’s a showpiece for Bryan Cranston. Even with the heavy-handed title cards at the end of the trailer reminding the viewer that “NO ONE CAN TELL YOU WHAT TO DO/THINK/SAY/etc…” I never got the impression it would be something like Freeheld or Spotlight. Trumbo has pretty sets, cool clothes, typewriters, and cigarettes; constantly smoking, everywhere you go.

I’ve noticed a bizarre wave of nostalgia for smoking indoors in movies over the past year. I remember reading an article in TIME for Kids when I was in second grade about how the MPAA was fighting and winning to have a rating classification added for “smoking onscreen,” citing Cruella De Vil from One Hundred and One Dalmatians as a negative influence on children with dangerously high cholesterol weaned on McDonald’s and Coke, already been convinced that they and everyone they know has ADD. For a while, this warning stuck, and cigarettes all but disappeared from Hollywood movies just as the smoke cleared in bars, offices, and restaurants. But Marlboro and Camel might as well sponsor every period piece out now—could cigarettes be making a comeback? Maybe not—“Bowls and bowls of cigarettes” at a wedding is apparently disgusting and bizarre enough to warrant a shank of snark in Vanity Fair. Trumbo doesn’t bore, moves briskly, but it’ll make you want to pick up smoking if you haven’t already, and pine for the days of over the counter Benzedrine as you watch this guy crank out script after script without sleep in his bathtub. I’ve never seen a better endorsement of tobacco, pills, and working in water.