Everyone Is on Project Runway

Quality television could learn about diversity from reality TV. 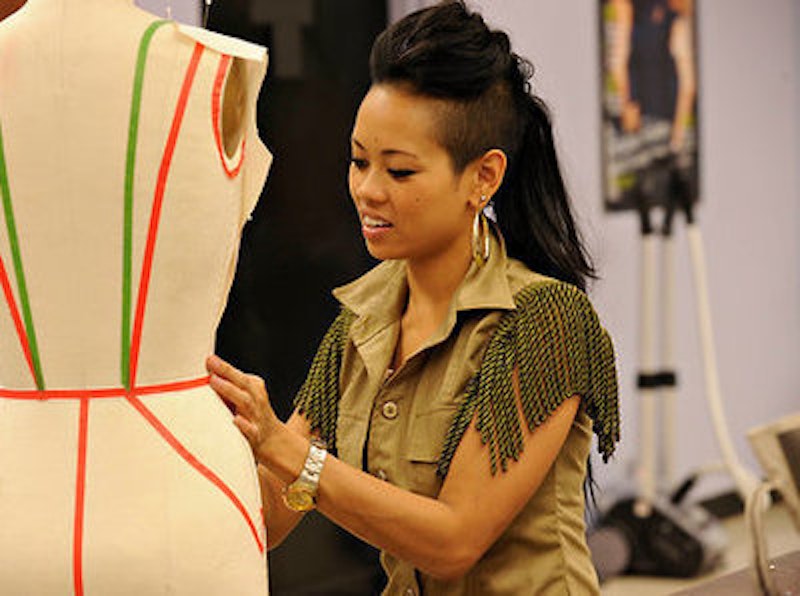 Despite impassioned calls for diversity, film, television, books, and everything else still relentlessly feature the same sorts of people being the same sorts of heroes as ever. A few scenes of Black Panther kicking ass in the forthcoming Captain America: Civil War are exciting—but the fact remains that from the Avengers to Ant-Man to Batman vs. Superman to Daredevil, the overwhelming majority of superhero franchises still feature white dudes hitting people, with the occasional white woman like Jessica Jones tossed in for good measure. Meanwhile, Netflix's Narcos is all about Colombian drug trafficking with the point of view from a white guy cop. And heaven forbid you get an LGBT hero or protagonist amidst all the James Bonds and Mission Impossibles.

There are some exceptions—especially on television. Orange Is the New Black has a bisexual protagonist and numerous black and Hispanic characters; Sense8 had a diverse cast. And then there's Project Runway.

Reality television shows usually aren't mentioned in discussions of diversity—or in any discussions. They're largely seen as worthless debased crap. And yet, that crap manages to put on screen many people who never show up in quality television—and to treat them with significantly more respect.

On Season 9 of Project Runway, the contestants, and the judges, notably include not a single straight white guy. Everybody who is male, from Tim Gunn on down, is gay. Rather than tokens, gay men are the majority—which means that through sheer numbers, Project Runway avoids the kinds of gay-best-friend stereotypes that proliferate in movies and television. Some of the designers are fussy in their personal appearance; others aren't. Many (though not all) are married, or in committed relationships. One, Bert, is in his 50s, and talks in passing about the death of his husband from AIDs, and his own struggles with alcoholism. Another, Josh, is a hyper-diva, with many stereotypically gay mannerisms—but he's also, it turns out, an incredible track and field star, who turned down numerous athletic scholarships to pursue his dreams of being a fashion designer. For one challenge, the designers are forced to run a race, and you get to watch Josh reveal his prowess, whipping around the track as Tim Gunn watches open-mouthed.

Josh McKinley, who’s white, is one of the final four designers who get to show at New York fashion week. The others are Viktor Luna, a Mexican-American, Anya Ayeuong-Chee, a woman of Chinese descent from Trinidad, and Kimberly Goldson, an African-American. They also come from a wide variety of economic backgrounds; Anya's family is wealthy enough to have established its own charitable foundation, while Josh is in such straightened circumstances that he believes a $20,000 prize from one of the challenges will transform his life (he doesn't win it; Anya does).

In many films and television shows, non-white people are treated as tokens, so that their background differences is never commented on. Or, alternatively, they become stereotypes, so that their difference defines them. Project Runway avoids both of these memes effortlessly. The contestants on the show are aware of, and talk about their backgrounds; Viktor's final collection is inspired by a trip to Mexico to see his deceased brother; Anya's by a trip to the island of Tobago; Kimberly talks repeatedly about the dearth of African-Americans in the fashion industry (not to mention the dearth of women), and why she's determined to change that. But for all of them, the primary identity in the show isn't "Mexican-American" or "African-American" or "gay man." It's "fashion designer." They're judged on their creativity—which means the show is focused on their individual art.

Anya is the winner of the series—and to realize how striking that is, just think about Pitch Perfect reimagined so that all the white girls lose in the early rounds, and an Asian foreigner wins the competition. Hollywood just doesn't do that. Nor does Hollywood care about the losers' stories. One of the most striking things about Project Runway, in comparison with quality television shows or films, is the way that the reality TV format breaks apart unitary narratives. Season 9 of Project Runway isn't just about Anya; Josh and Kimberly and Viktor aren't supporting characters in her story; they're not sidekicks helping out the hero. They have stories and families and hopes and disappointments of their own.

Project Runway, then, treats non-straight white guys with a level of respect and representation that is vanishingly rare in quality television, and even rarer in film.  That's not an accident. Project Runway is diverse precisely because it's viewed as lowbrow and crappy. The show is seen as frivolous in part because it's about fashion, often seen as frivolous and worthless because it's an industry devoted to women, and dominated by gay men. Similarly, quality television is admired for its strong storytelling and thematic sophistication, but it's the willingness to leave loose ends hanging that gives reality television the space to let different people be different, without subordinating any one person's narrative to another's.