Spotlight on a Sinking Ship

Spotlight is a memorial to investigative journalism and tactile communication. 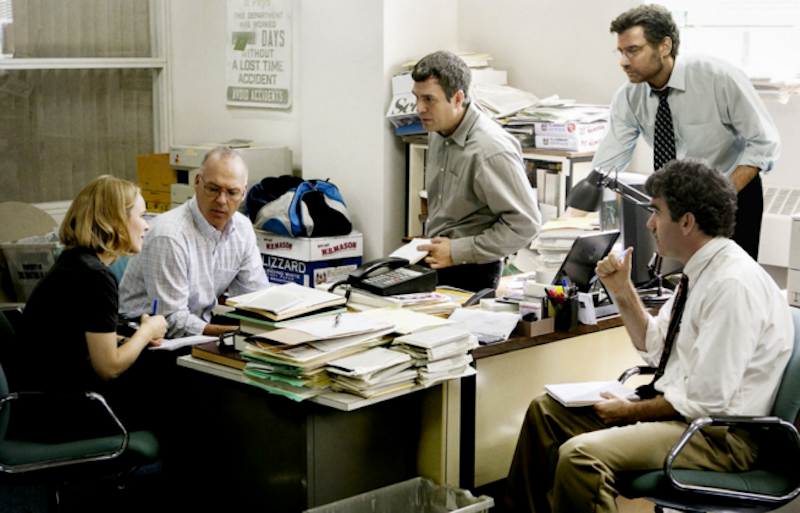 Spotlight is not a movie about the Catholic Church, pedophile priests, Boston, or rape survivors. It’s about The Boston Globe, and the way things used to be. It’s full of underhanded digs at new media, and asserts that really meaningful journalism takes time—months, years—and involves a team of at least half a dozen people making cold calls, knocking on doors, getting screamed at, stonewalled, rebuked, tipped off, disappointed, encouraged, enraged, and bopped on the head by bureaucracy. Spotlight is ostensibly about the Catholic Church and its community in Boston covering up and looking the other way from thousands of children being molested. The ones that do come out are sued, shamed, and silenced, lapsing into alcoholism, drug addiction, and abysmal depression.

Spotlight is not about community bystanders, institutional corruption, or poisonous traditions. It’s a memorial for newsrooms and newspapers, taking place from July 2001 to early 2002 as The Boston Globe’s “Spotlight” team of investigative journalists build the “Abuse in the Catholic Church” series that would win them a Pulitzer in 2003, unearthing nearly 90 priests moved from parish to parish after molesting the children they were trusted with, with victims either ignored or paid off in quiet. We meet a handful of grown victims and glimpse a couple of kids at the end recently abused, but none of this is depicted. There are no graphic flashbacks or dwelling on specifics. We spend almost all of the movie’s two hours and seven minutes following the Spotlight team as they dig through libraries, basements, directories, court archives, and the piles and piles of paper, folders, clippings and notepads littering their desks. They talk to their sources on landlines, holding the phone between their ear and their shoulder as they take notes and type. Their computers seem primitive today, displaying word processors and email alone. They work at a newspaper with hundreds of employees on a specialized investigative team that only pursues long-term projects with a big payoff. This movie is a tribute to that which has been lost to the democratization of the media and the hegemony and access of the technology and the Internet today.

The Spotlight team has power, something that no one in the social media era—except Black Lives Matter—has been able to conjure, not even Occupy Wall Street. The Globe and its Spotlight team are portrayed like superheroes, saviors of the abused, beaten down, and silenced. They are a paean to a lost populism, memories of what only occasionally was: respected and well-financed institutions taking down other even more powerful organizations and people with enough money to pay off the world and sue anyone to death. Fourteen years makes such a difference—because we knew the ship was sinking in 2001, and it was a bit bizarre to see my childhood years played out as historical drama, and how sad to realize the subtext of Spotlight: that tactile, physical action and communication is already being looked back on with fondness, as we rocket up forever upward into digital clouds with tissue going numb.