Showdown of the sit-com all-star mind-sets. 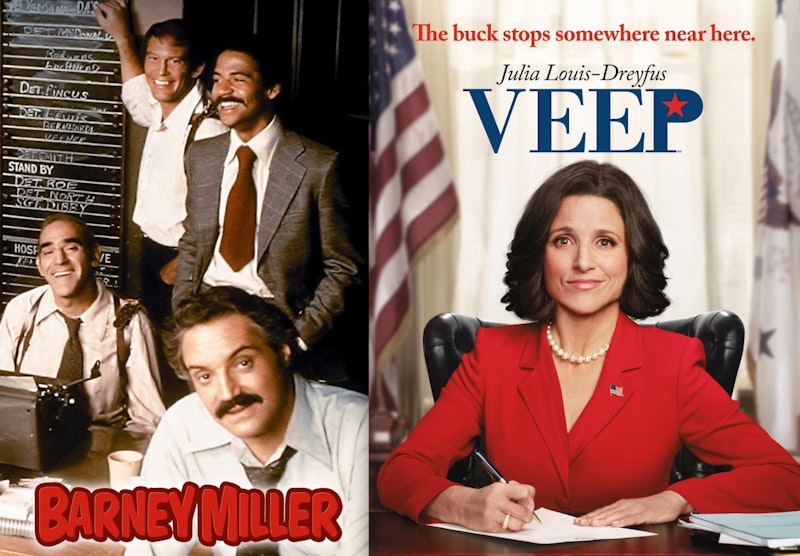 Every now and then I manage to meditate. I mean as a habit. A streak here, a streak there; the longest was a year or so. I’m much more of a TV viewer. Even so, you can learn from meditation. Take the shows I’ve been watching: Veep and Barney Miller. The first is about mean people and the second is about nice people, which is a key difference. Building on that difference, I’d say that… well, Barney Miller may not be a picture of the meditative state of mind, but place the show next to Veep and you can see that Veep’s a picture of the non-meditative state of mind.

With Veep everything’s frantic and nothing matters. The camera jumps around and people talk over each other. But the experience has a center, in that the camera appears to be taking somebody’s point of view: somebody’s looking back and forth and overhearing the comments ricocheting about the room. We don’t know who—oh, it’s us, and are we in a state. Apparently we can’t sit back and wait a minute, we have to chase down every nugget and we never catch up. This desperate, hyper-active self is the central character of Veep, so central we don’t know it’s there. Yet there it is.

The other characters, from Veep on down, act as a sort of frieze exemplifying this central being’s tendencies. Talk about frantic and grasping, these guys have no life except to scramble and they scramble for nothing but themselves. Each character—I exempt the beatific Richard and the implacably well-meaning Minna Häkkinen—is a tent whose pole has toppled. Can the tent stay up? Not really, but it’s going to try and try and try. This effort will go on for decades, and then the tent (I mean the person) will be dead.

The message of Veep is that nothing’s okay. The only thing that matters is what people—co-workers, acquaintances, the boss, the public—think about you, and they’re inclined to think the worst because that’s what you deserve. Climb to the top of the government and you’re still a bug dancing on a griddle. You have no power. You’re supposed to, but there’s nothing you want to do. Your goal is simply to stay up there, and other people get to decide if you do that. As noted, they lean toward giving you the thumbs down.

The message of Barney Miller is that things could be worse but people make them better. Thumbs up and thumbs down don’t come into it that much. Wojo thinks the world of Barney, and Harris longs for glory outside the station house (and eventually gets it). Levitt, of course, stands out for needing approbation. Otherwise we see people who don’t grade each other or themselves. Their jobs, and their lives, aren’t about how the people seem but what they do, and what they do is help others and not themselves. The gang on Barney Miller does have power: they can put people in jail. But they make a point of exercising their power less than they might. A typical Barney Miller moment is for a potential felon to go free, his or her lesson learned. A typical Veep moment is for somebody higher up to snarl at somebody lower down while each privately longs for death.

Veep’s title character is everybody’s boss and she’s a jerk and a screw-up. Barney Miller’s title character is everybody’s boss and he’s a mensch who understands people and does his job right. The people in Veep ought to be important but aren’t; with their fancy suits and cell phones, they still never get anywhere. Instead they frustrate themselves and find themselves debased, debased in the same old ways episode after episode. Which isn’t a criticism of the show: the repetition drives home the characters’ helplessness before themselves, which is what the program’s all about. Meanwhile, the people in Barney Miller ought to feel beaten down but don’t. Working in a dingy city office, they manage to do some good on most days. And in Barney Miller the camera hangs back and lets us take a look as people interact. Nobody’s the center and everyone’s all right, all right enough for each to continue existing in his or her little patch of reality.

Also, Veep’s about mean people and Barney Miller’s about nice people. You don’t have to meditate to get that part.