The Omega Man lacks the mythic sense of its source material, the novel I Am Legend. 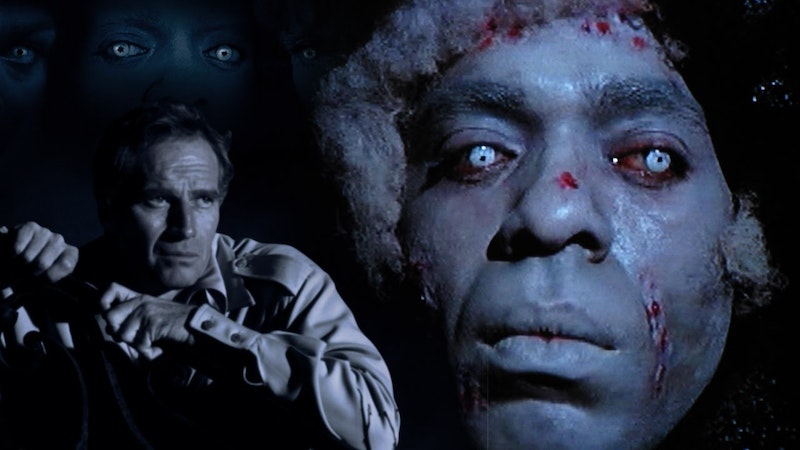 The third film of the Criterion Channel’s 1970s Sci-Fi collection is also the third film in the series adapting a book from a previous decade. Richard Matheson’s 1954 novel I Am Legend was made in 1964 as The Last Man on Earth, more recently for the third time in 2007 under its original title, but in between came Criterion’s selection: 1971's The Omega Man.

The movie was directed by Boris Sagal, a veteran TV director, from a script by the husband-and-wife team of John and Joyce Hooper Corrington, who’d go on to write a few more films before moving over to soap operas. It’s fair to say there’s something of a TV feel to the film as a whole.

It opens with Robert Neville, played by Charlton Heston, driving through a deserted Los Angeles in broad daylight. He watches a movie, the only man in the theater. He takes a new car when his current one breaks down. He talks to himself, imagining dialogues, and then hurries to get home before night comes.

At which point he’s attacked, and the intriguing air of mystery and desolation evaporates. It turns out Los Angeles is empty because almost everyone is dead, victim of a plague created as a weapon in a near-future war between Russia and China. Neville, we eventually learn, was a research scientist who injected himself with an experimental cure. Most everyone else died, except for a relatively few people now completely unable to bear sunlight. This group, the Family, abhor science and so abhor Neville, “lord of the infernal engines” and the last of “the users of the wheel.”

The early part of the film follows the conflict between Neville and the Family, as they try to break into his apartment during the night while by day he hunts for their home base—their “nest,” as he calls it. Then he makes a discovery, and gains something beyond himself to fight for.

There are intriguing moments in The Omega Man, notably in the intro, but too little atmosphere. The dialogue makes a point of observing that while Neville can’t see in the dark the Family is helpless in the light; you might expect some visual play with shadows and sunlight, but there’s nothing at all like that. The movie looks a little better than a well-made TV program of about 1970: it’s lit clearly, there are some interesting textures here and there, but no real horror atmosphere.

It’s not a terrible film. Heston carries the film almost by himself for long stretches, but it’s never slow. There are some practical issues, though, starting with the way the movie imagines Neville’s adversaries.

It’s tempting to see the Family as an echo of a 1970s fear of oddball cults, the name a glance at the Manson Family. Their leader, Matthias (Anthony Zerbe), is a charismatic former TV broadcaster, while the majority of his followers get no lines or individualization at all. They’re mostly cloaked shapes for Heston to fight and kill. On one level that’s fine. On another, the explanation the movie gives us for who they are makes them victims and not monsters.

In Matheson’s novel, those struck by plague were mutated into vampire-like creatures—rationalized vampires, the product of natural bacteria and not supernatural damnation. The movie takes things a step further. There’s nothing especially threatening or eerie about Neville’s opponents here, nothing that even hints at the supernatural; they’re a group of plague survivors, in sunglasses and black cloaks. Since we never really have a sense of them as in any way inhuman, Neville’s war against them is difficult to accept. It’s a little strange to watch him trying to find sleeping people to murder.

The movie doesn’t explore this point; it never really questions Neville’s actions. Which is odd, as one wonders why he doesn’t simply drive away from the Family, who, shunning technology, would have no way to catch or find him. Neville’s explanation is that he doesn’t want to be forced from his home, but given the options are either death or mass murder, this feels insubstantial.

There’s a lack of mythic sense to the movie that’s ironic in something adapted from a story titled I Am Legend. Neville in the film is in no way legendary, and Matthias’ description of him as a demonic figure doesn’t establish him as such; the other members of the Family don’t react with dread or awe. The conflict of Neville and Matthias revolves around the value of science, but it’s never written with the depth that could bring out a tension between Neville’s basically rational approach to the world and his mythic state as the last (healthy) man on Earth.

It’s an entertaining movie, with lots of gunplay, unexpected twists, and action scenes with elaborate choreography. But it becomes more conventional as it goes along—plot twists bring in standard elements for Heston to play against, and his character shifts from a burned-out survivor slowly falling prey to depression into a typical sci-fi scientist trying to save the world. The movie also becomes less coherent on a plot level; certain characters act with an unbelievable idealism, for example, and late in the film the plague develops a certain way with a rapidity that contradicts what we’ve seen previously.

What remains to me as the most interesting moment is a tense sequence in which the Family makes a sustained effort to break in to Neville’s home, and in a race against time he has to fix his generator. It’s an unconventional kind of suspense, as he fiddles with tools and grits his teeth and tries to get the machine up and running. But there’s a glimpse of the self-reliance he’s had to develop over the three years he’s lived alone, battling the Family. And there’s also a glimpse of him working with technology, what the Family abhors. It’s very distinctly a mechanical technology, metal and oil, not circuits and electronics; a glimpse not just of 1971's technology but what technology meant in 1971. It’s the science Neville’s defending: practical stuff that you sweat over, and work with you hands, and out of which you extract electricity and safety.