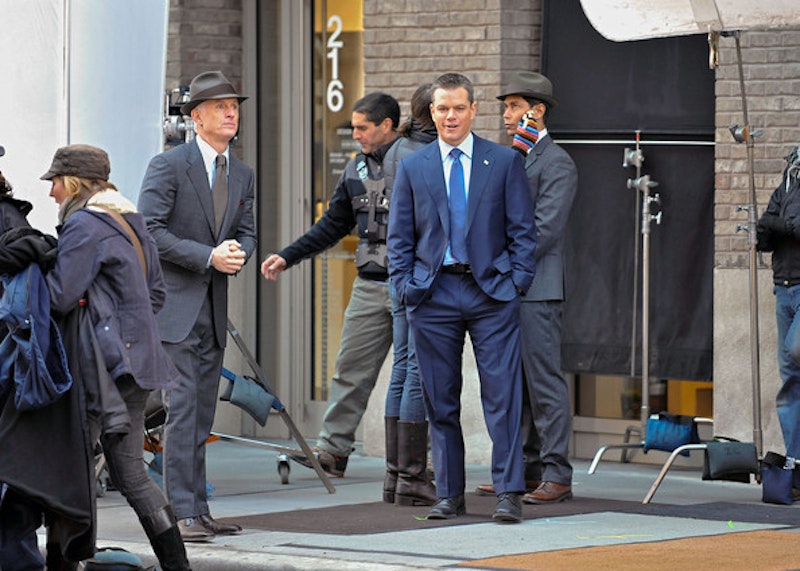 You have a problem. You’ve got a good script in your hands, adapted from a story by Philip K. Dick. It’s interesting and sophisticated. It’s a romance and a thriller. It’s science fiction and fantasy. It has Christian overtones for Middle America and a New York setting for the urbanites.

The problem? As Dick works tend to be, it’s really screwy, even campy. What do you do?

The Adjustment Bureau is such a strange, oddly enjoyable film, it gets me thinking: why does it work? It is not Inception strange. Or Scanner Darkly strange. But it is weird, mostly because it shouldn’t work, but it kind of does.

It’s a story about a group of bureaucratic angels who secretly control the world in the name of a “Chairman”—read: God—who has a “Plan” for the world. These forces conspire to stop two random people from getting it on. It’s positively ridiculous.

But The Adjustment Bureau manages to strike the right balance. Matt Damon and Emily Blunt are both charming and attractive enough to hold your attention. The script includes just enough tricks and surprises to keep you interested in the plot, while allowing enough time for character development. Most importantly, Adjustment Bureau has a bit of a sense of humor about its eccentricities.

The story starts with Senate candidate Rep. David Norris (Damon) who loses the election in New York because the New York Post releases a photo of his rear end. A beautiful woman, Elise (Emily Blunt), inspires him to concede the race brilliantly, and he is immediately the front-runner for the next election. David falls for Elise, a dancer, but that’s not in the Plan!

The rest of the movie follows David’s efforts to stay with Elise in defiance of the Plan. The men in hats, 1950s-style bureaucrats who execute the wishes of the Chairman, try to stop him with their limited magical powers.

The bureaucrats are really annoying and dismiss true love, except one, Harry (Anthony Mackie), who is basically David’s guardian angel. Harry, the film’s “magical Negro,” defies his boss’ orders: he believes the Plan can be changed or at least has some flexibility.

Is there anything at stake besides David’s love life? A few things, maybe, including the fate of the world. See, there aren’t enough men in hats to monitor everyone. They only control and interfere with special people. David is special. His political career will take off and he’ll change the world, but Elise will hold him back, and vice versa.

The film has a lot of themes, maybe too many, but it mainly contrasts individual agency with fate. How much control do we have over our own lives? I’ll leave you to guess the movie’s stance on free will. It isn’t terribly original.

The ending may not blow your mind, but the journey is far from dull. The Adjustment Bureau is sleek and dark, with occasional whimsy. It features plenty of chic, recognizable Manhattan locations, all set to a pleasurable score from Angels in America composer Thomas Newman (those familiar with the HBO film will recognize his contribution).

Despite vague hints of The Matrix and even Inception, The Adjustment Bureau is a conventional boy-meets-girl tale told semi-unconventionally but with enough self-awareness to not irritate too many people.